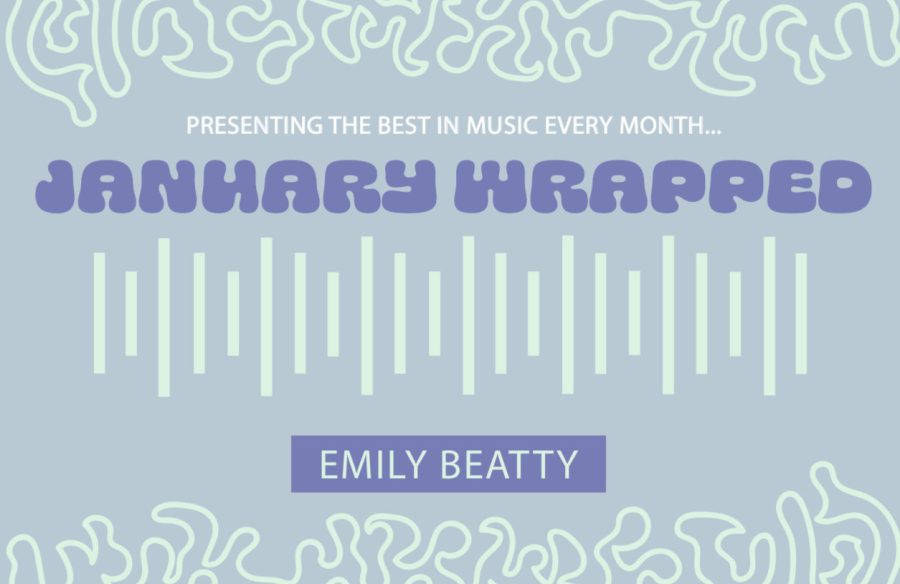 With a new year comes hundreds of new songs, EPs and albums to look forward to from artists all over the world. While January isn’t typically a popular month for new releases in the music industry, there were definitely a number of gems released this month, and many more artists have announced upcoming projects for the year ahead.

You can listen along to the best new releases from this past month here on Spotify.

“Dawn FM” by The Weeknd

Abel Tesfaye, known professionally as The Weeknd, had quite a year in 2021. With the success of his last album “After Hours” and big performances such as his Super Bowl Halftime show, the “Out of Time” singer had a lot to live up to with his new release: a full-length album titled “Dawn FM” that dropped on Jan. 7.

The album overall has an ‘80s pop undertone that pulls inspiration from a Japanese-pop style of production. The title track opens the album and runs at a minute and thirty seconds, transporting the listener to The Weeknd’s personal radio station, a mellow yet upbeat collection of songs. Conceptually, the album flows magnificently, as each song blends seamlessly with the next. Even the popular radio single of “Take My Breath” doesn’t seem out of place when the spoken-word interlude “A Tale By Quincy” follows a few songs later.

The overall vibe is one that is reminiscent of Silk Sonic’s “An Evening With Silk Sonic;” an album with a strong ‘70s dance-pop tone that served as a motif running through each of the tracks. These two albums releasing only months apart begs the question: will we see more works inspired by older musical eras in the near future? “Dawn FM” was met with mixed reviews due to Tesfaye’s (The Weeknd) new sound, but this new look couldn’t work better for an artist who takes such care and consideration with his album and eras. The album leaves fans wondering what The Weeknd will do next to artistically immerse himself and his listeners into this new sound and image.

Ella Mai is diving into 2022 with a new single titled “DFMU.” We haven’t seen too much from the British artist since her self-titled debut album was released in 2018, and featured hit songs such as “Trip” and “Boo’d Up.” “DFMU” is the first single from Mai’s highly anticipated sophomore album, which is set to drop at some point early this year.

“DFMU,” short for “Don’t F*** Me Up,” was released on Jan. 28., and shows just how much Mai’s vocals have been missed on the R&B charts. Her vocals, though simple in this track, show the power and maturity the star has been developing over the last four years. The lyrics are certainly more emotional than her 2018 tracks and show growth and improvement in her years off. The tone of her voice pairs wonderfully with the beat and piano chords of the backtrack.

“I feel like the music that I’ve released in the past, I definitely have been honest, but I don’t think I’ve been as vulnerable. I think that this shows a little bit more of an emotional side to me,” Mai told Nylon Magazine about her new track.

The star’s second album still has no title or release date, but this first taste has many waiting in anticipation.

“Not For Nothing (feat. Anderson .Paak)” by Rick Ross

Rick Ross and Anderson .Paak come together in a wonderful collaboration on “Not For Nothing,” a bonus track from Ross’s newest album. On Jan. 28, Ross released a deluxe version of his album “Richer Than I Ever Been,” which he dropped in December 2021. The deluxe version of the album includes three songs that don’t appear on the original, including .Paak’s feature.

Despite his nasally quality, .Paak’s voice dominates this track as he knows how to work his vocals, and his sound pairs beautifully with Ross’s deeper tone. The backtrack is placed perfectly, with supplemental female vocals coming in at all the right moments. The lyrics are nothing special, especially compared to the genius these two artists have displayed in the past. However, Ross has such a strong control over his rap flow that it feels almost like a freestyle, and it shows that he is seasoned in working a beat. The contradiction between his rap and .Paak’s smooth chorus is an interesting combination, but it certainly pays off with this number.

“Won’t Stand Down” by Muse

Rock band Muse is back on the scene with the single “Won’t Stand Down.” Muse was last seen with their 2018 album “Simulation Theory,” and their new single is thought to be the lead track from their upcoming album, meant to be a follow up to their last release.

“Won’t Stand Down,” released on Jan. 13, is a rock track through and through: there are heavy drums, intense bass and electric guitar, and the vocals are strained against the instrumentals. There is a clear metal influence to the song, something rarely seen by Muse, that is clearly displayed in the vocals and instrumental solos of the bridge.

The song provides an uplifting message, with band member Matt Bellamy stating the lyrics are “about standing your ground against bullies, whether that be on the playground, at work or anywhere.” The music video and tone of the song, however, seem to be much darker than the positive ‘stick up for yourself’ message. A tracklist and release date for Muse’s upcoming album has not yet been announced.