‘Stay Close’ flips the script on the serial killer genre 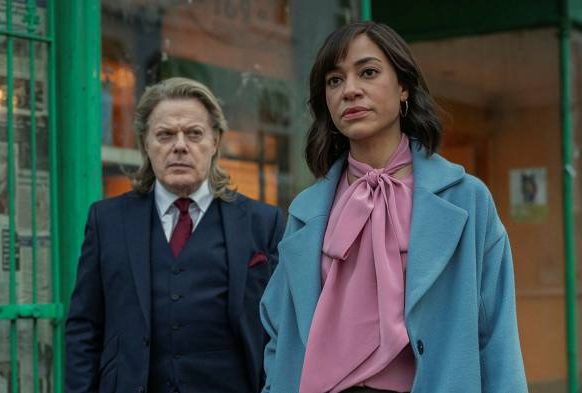 The show begins with the mystery of a young man going missing from a strip club, with the audience seeing him move from the club into the forest beside it.

From there, the plot follows Megan Pierce (Cush Jumbo) and those who are attached to her current life – and her hidden past.

Megan, also known as Cassie, left her previous life as a stripper after finding her abusive ex, Stewart, dead in the same woods where the man in the first scene went missing. She changed her lifestyle and identity to distance herself from her past.

Megan/Cassie has a new fiance, her long-time partner with whom she has children. Despite playing two very different people, she is deeply unrelatable to the audience.

The arguably most emotionally captivating and charming addition to the cast, Detective Michael Broom (James Nesbitt), is put on the case of the missing character from the first scene. Broom quickly pieces together a disappearance from years prior and connects it to the current missing man.

Broom, who is partnered with his ex-wife, steals the show with every single scene he’s a part of.

As Broom investigates the case, he reaches out to two other main characters, Lorraine Griggs (Sarah Parish) – the owner of the strip club that Cassie worked in – and Ray Levine (Richard Armitage), Cassie’s ex-fiance who wakes up to find pictures of the missing man on his camera.

With all roads leading back to Megan/Cassie, the plot thickens. Each character has their own connection to the missing man and as Broom investigates, it becomes clear that a man goes missing at the strip club’s annual masked party each year. Without a doubt, the characters have a serial killer on their hands.

The show’s plot and relationships not only deepen as it progresses, but it is also visually stunning at times. One scene particularly stood out: a tennis match that Megan’s daughter plays in.

During the match, the crowd’s heads follow the ball from side to side. However, a woman who is completely still amongst a sea of movement frightens the audience at home, as well as the main character on screen.

The show itself is binge-worthy, as the connections between each character flourish with each passing episode. It becomes difficult to see beyond the blurred lines of right and wrong or past and present.

Though Megan/Cassie continues to be frustratingly one-dimensional, the rest of the characters pick up her slack. The detectives continue their pursuit but simultaneously capture the hearts of the audience with their “normal” problems, such as the inability to find child care resulting in bringing a toddler on a hunt for a serial killer in a stand-out scene.

It must be noted that Eddie Izzard’s portrayal of Harry Sutton stacks the cast immeasurably. Sutton is brought to life beautifully by Izzard’s innate ability to breathe life into difficult and multi-faceted characters.

The show does take a weird and unpleasant turn with the introduction of two hired killers who torture and kill for information. The unpleasantness isn’t actually that they kill for work, but that they do choreograph dance numbers and talk about remaining celibate while dumping bodies. It seemed like the show’s writer just had extra time to fill.

The serial killer is revealed in the most heart-wrenching scene of the show. Broom hears the confession that confirms one man is murdered a year, a man who has abused women, dropped roofies into their drinks and many other abusive transgressions that often fly under the radar.

Broom’s shocked gasp and emotional, tear-fueled reaction to her confession and the reasoning behind the murderers leaves the audience torn.

For one of the first times, the audience is left thinking that maybe the serial killer had a point.   The lives taken are those of men who were preying on the women she cared about: men who rape and abuse their partners.

“Stay Close” beautifully blurs the between hero and villain, leaving the audience divided on the “bad guy” of the show.