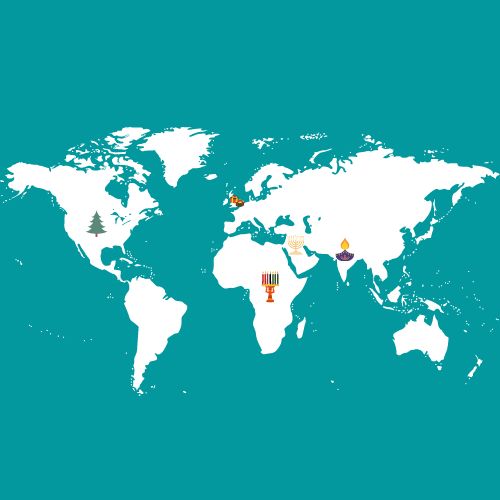 Holidays around the world commence during the month of December.

Holidays around the world begin to celebrate annual traditions during this time of year. The Suffolk University Interfaith Center program uses this season to invite students of all faiths and beliefs to embrace their religious customs.

Director, Reverend and University Chaplain of the Interfaith Center Amy Fisher founded the program in 2000. Coming to the university, she realized she wanted to incorporate a program that would allow the student body to freely express their beliefs.

“We have more than one religion at Suffolk and all of those religions should have a place to exist and coexist,” said Fisher.

While many students will be leaving campus for winter break, other students may not have the opportunity to do so. “Festival of the Lights” is an occasion where students from all cultures can experience their traditions and utilize the center even if they can’t do so at home.

As part of the only interfaith center in the Boston area, “Festival of the Lights” will be hosted at 12:30 p.m. Thursday to help give students staying on campus a sense of holiday spirit.

Some of the holidays celebrated at the event could include Kwanzaa, Hanukkah, Christmas, Boxing Day and more.

“We need to acknowledge the many religious celebrations that happen all over. There are so many festivals of light,” said Fisher.

Kwanzaa is known as an African American and Pan-African holiday that was created in 1966. It begins every year on Dec. 26 and ends on Jan. 1. According to the National Museum of African American History and Culture, many of the traditions and concepts are voiced in the Swahili language.

Hanukkah, or Chanukah, is an eight-day Jewish holiday that is often known as the “Festival of Lights.” Each year it begins on the 25th day of the Jewish month, Kislev. According to History.com, the day observes the rededication of the Second Temple, when Jews rose up against the Greek-Syrians during the Maccabean Revolt in the second century B.C.

Christmas commemorates the birth of Jesus in Nazareth, who became the savior of the Christian religion. The Dec. 25 holiday became very popular in the 19th century and includes traditions such as putting up Christmas trees, caroling and Santa Claus, according to History.com

Boxing Day is a holiday celebrated in the United Kingdom and other British Commonwealth countries. The day is observed on Dec. 26 to give to the less fortunate. According to CNN, servants in the Victorian Era were not allowed to take time off on Christmas in order to keep working for their employers, so they would use this day to celebrate the holiday.

Students are welcome to participate in organizations such as Buddhist Life, Christian Life, Muslim Life, Pagan Life, Secular Life and Suffolk Hillel. While the center has experienced less student outreach during the COVID-19 pandemic, the center encourages students to take action if there are any events they wish to see on campus.