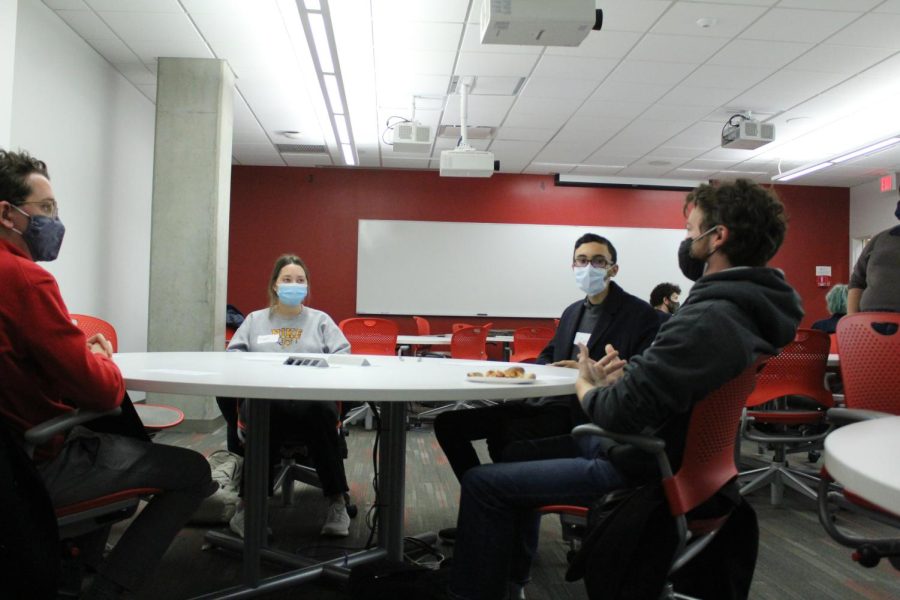 Suffolk Votes held the last panel discussion of its “Let’s Talk About It” program, closing out the series of events focusing on cancel culture, polarization and the American Dream.

The events featured representatives from political groups around campus including the Suffolk Democrats, Suffolk GOP and Turning Point USA, focusing on what issues divide the nation and what can bring different perspectives together.

The last event in the series looked into the American Dream. Students were divided into groups where they spoke and reflected together on their personal experiences and beliefs.

Important discussions arose regarding the idealized version of the American Dream and how the concept has evolved over time.

“[We wanted] issues that were in the news, that people were talking about amongst their friend groups, and we found that most people would probably have an opinion on them one way or the other,” said Matthew Albanese, a Suffolk Votes ambassador.

The event served as a way for students with varying opinions on politics to come together in educated discussions. Prior to the event, a conversation agreement was put in place so that all voices from diverse perspectives were heard.

“The program is really focused on learning how to listen to people with different perspectives, and a lot of that is because people have a hard time in our culture right now. We are not very good at having hard conversations,” said Adam Westbrook, the director for the Center for Community Engagement.

Albanese added that students should engage in these types of conversations whenever possible, particularly when it comes to current events and politics.

“Personally speaking, I think it’s healthy to have your ideas challenged because if you remain in a sort of holding pattern of maintaining the same opinions, and they’re unchallenged by anybody, you can kind of fall into a trap of believing that your way is the only way,” said Albanese.

Looking to the future, Westbrook said Suffolk Votes is in the process of creating more programs for the spring semester that will discuss similar topics.

“We’re in a moment where we need to learn how to work together with people who aren’t necessarily our best friends, or who don’t see the world the same way as we do, and this program really helps students gain the skills to do that,” said Westbrook.

Albanese said engaging in these conversations in the wake of the historic Boston mayoral election can demonstrate to Suffolk students what political collaboration can lead to.

“We’re hoping that just by encouraging people to become active and engage more with civic education, whether it’s through an academic course at Suffolk or just coming to a conversation about a political topic, […] that people can see what positive changes can come from just engaging with each other,” said Albanese.