Wrap up fall with your favorite artists 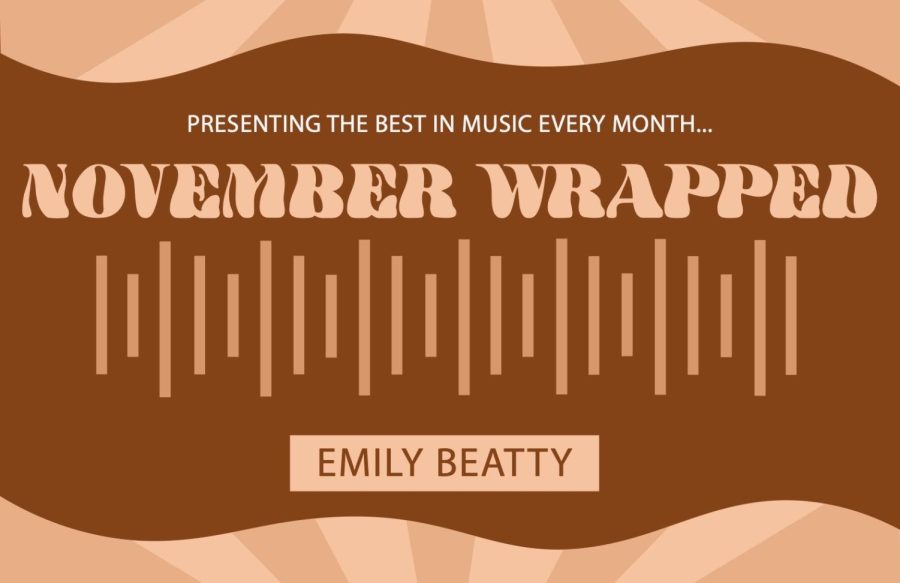 December is officially here, meaning the Queen of Christmas (aka Mariah Carey) has finally defrosted and the holidays are quickly approaching. In one final Wrapped for the year, let’s take a look at some of the best new releases from November 2021.

Last month was packed with dozens of new singles and albums, and you can follow along with the top picks here on Spotify.
“30” by Adele
Adele’s highly-anticipated fourth album hit streaming services Nov. 19 and for many fans and critics, it did not miss the mark. The artist dropped the lead single “Easy On Me” in October, and showed the vulnerability and tone that the album would embody. The album is 12 tracks total, with each song covering the artist’s high-profile divorce, new beau and the feelings of dealing with both by using excellent precision and emotional storytelling.

The best song on the album is by far Adele’s tribute to her 9-year-old son Angelo, titled “My Little Love.” The six-minute track is a conversation between Adele and her son as she explains her divorce to him. The song features snippets of their actual conversations when Angelo was just six-years-old, making it absolutely heart-wrenching for the listener. The singer said the song was crucial to her figuring out how to deal with life as a single mom, saying in an interview on q with Tom Power.

“It sorted out some of the clutter that was going on in my ability to talk about how I was feeling,” Adele said.
“Bite Me” by Avril Lavigne
The pop-punk princess of the early 2000s has returned! Avril Lavigne released the single “Bite Me” on Nov. 10. The song features Blink-182 drummer and head of her record label Travis Barker, and both star in the music video that was released two days after the track came out. The single comes after Lavigne announced a world tour, which is scheduled to take place in 2022.

The single is a fun one for sure. The drums are amazing – as Barker’s features usually are – and Lavigne’s vocals are just as great as they were a decade ago when she topped the charts. The lyric writing was a bit basic, with the chorus featuring the line “forever and ever you’re gonna wish I was your wifey.” Despite the cringe-worthy slang, the song is a catchy one and has many longtime fans of Lavigne anticipating what’s coming next from the star.
“An Evening With Silk Sonic” by Silk Sonic
Anderson .Paak and Bruno Mars, who make up the duo Silk Sonic, released their nine-track debut album on Nov. 10. Though short, the album certainly packs a punch. Overall, the tracks have a very intense ‘70s funk vibe to them, but the modern production places the album perfectly in 2021.

Between .Paak’s writing and production skills and Mars’s phenomenal vocals, every song is pleasant to listen to, and every one feels better than the last. The retro aesthetic Mars and .Paak were trying to achieve was clearly a success, and the pair pose a strong presence in the music industry if they choose to work together on more projects as Silk Sonic. The duo performed the lead single, “Leave the Door Open,” at the 63rd Annual Grammy Awards back in March, and it’s no doubt that “An Evening With Silk Sonic” will dominate next year’s award season.
“Red (Taylor’s Version)” by Taylor Swift
It’s finally here: Taylor Swift, after a long six months, has re-released both fan and critic favorite “Red.” The pop star announced the album would drop in November back in June and had fans anxiously anticipating a lead single that never came.

The 30-track album was delivered in full as the singer intended, including 20 tracks from the original album, and 10 bonus tracks – nine of which were “From The Vault.”

Swift calls “Red” her “only true break up album,” and featured her most heart-breaking track to date, “All Too Well (10 Minute Version) (Taylor’s Version) (From The Vault),” on her newest version. The song came with a short film that was directed by Swift herself, featuring actors Sadie Sink and Dylan O’Brien.

Swift also released a music video for bonus track “I Bet You Think About Me (feat. Chris Stapleton) (Taylor’s Version) (From The Vault),” delighting fans. The original album was one of Swift’s best, and “Taylor’s Version” is everything the original was and infinite amounts more.
“Day After Tomorrow” by Phoebe Bridgers
After a high-profile feature on bonus track “Nothing New (Taylor’s Version) (From The Vault)” from Taylor Swift’s “Red (Taylor’s Version),” Phoebe Bridgers is back releasing an emotional new single, “Day After Tomorrow.” The singer dropped the song on the last day of the month, Nov. 30, and the track perfectly sets up fans for the chilly month of December.

The single puts emphasis on Bridger’s raspy and intense vocals with minimal backtracking. However, the instrumental behind Bridger’s vocals is arguably what makes the track so emotional. Of course, the writing is amazing. It’s Phoebe Bridgers and she knows how to tell a story through song. But the string and acoustics in the background show how much attention the singer-songwriter puts into the production and overall craftsmanship of her work.

The simplistic nature of the song makes it easy to listen to, and yet the intensity of the emotion has the listener wanting to grab a box of tissues. Overall, a beautiful new track from the indie artist left many excited to see what will come next from the up-and-coming superstar.