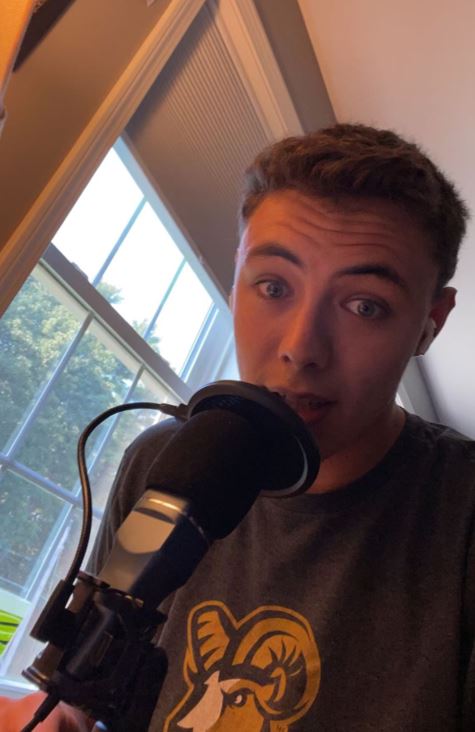 40 hours a week on 18 teams. That’s how much time Suffolk University junior Alex Caruso spends on fantasy football each week. But Caruso’s time and effort isn’t spent on himself; it’s spent using his passion to create a podcast and TikToks that hundreds of thousands have enjoyed.

Caruso has produced and hosted over 110 episodes of his own fantasy football podcast, “The Fresh Fantasy Podcast,” which has new episodes every Tuesday and Friday during the NFL season. Caruso has had some major figures in the fantasy industry on the show, including Yahoo’s Matt Harmon, Pro Football Focus’s Ian Hartitz, and the Athletic’s Jake Cieley.

“It was decided that if you don’t ask, you don’t get,” Caruso said. “So I spent about six or seven hours before the season started writing down all the guests I wanted but also going through all their social media to try and find the best way to contact them. I would just message them on whatever platform and more often than not they were nice enough to say yes.”

Caruso also produces the Sawyer Business School “Amplification Avenue Podcast.” He appears in the beginning and the end of each show, but his main roles include coming up with content, editing and assisting the host, marketing professor Skip Perham.

“It’s all about connecting sports with business and how that intersects with real-world events, things that happen both good and bad,” said Caruso.

While Caruso’s podcast resume is impressive, his largest presence is on TikTok. His page (@fresh_fantasy) has over 26,000 followers, amassing over 789,000 likes. His videos include advice on hot and cold players, game takeaways and predictions.

“I think it’s being able to get a video out there every day so when people get home they can expect a video from me,” Caruso said about his TikTok success. “It’s also how much time I put into each video. There’s a lot of statistics and stuff like that, I’m not just throwing stuff at the wall, I truly believe it or I wouldn’t be saying it.”

Caruso spends a large chunk of his week doing research both for TikTok and his podcast. He says lots of his research is aggregating information that’s out there and presenting for audiences.

“I have to make it so every other person can understand it. For me, I can sit there for 10 hours and enjoy those silly stats,” Caruso said. “But most people aren’t like that, I have to get it in a format that’s quick because people don’t have all day.”

Caruso manages to produce dozens of obscure statistics for his audience to reflect on each week, but he says his ability to offer unique content boils down to hard work..

“It’s trying to spend more than anyone else, work harder than anyone else to find that bit of knowledge,” he said. “So it’s just my willingness to look through every nook and cranny for the best information I can possibly give people.”

While “The Fresh Fantasy Podcast” is a one-man show, Caruso attributes his growth and success largely to his father Jim, whom he bounces ideas off of. His father, who is a graphic designer, also designed the logo for the show.

“Getting to do this with him is my biggest inspiration, he’s my biggest supporter, and I wouldn’t have half the success I do right now without him pushing me,” Caruso said.

“I was a big fantasy football player growing up, so I decided on a whim to start my own podcast, and did about 50 episodes the first season,” Caruso said. “In June of this year, someone suggested I do TikTok to grow my audience so I said why not.”

Caruso sees himself continuing on after graduation with his passion for fantasy football, one that has earned him a winning record in 15 of his 18 leagues.