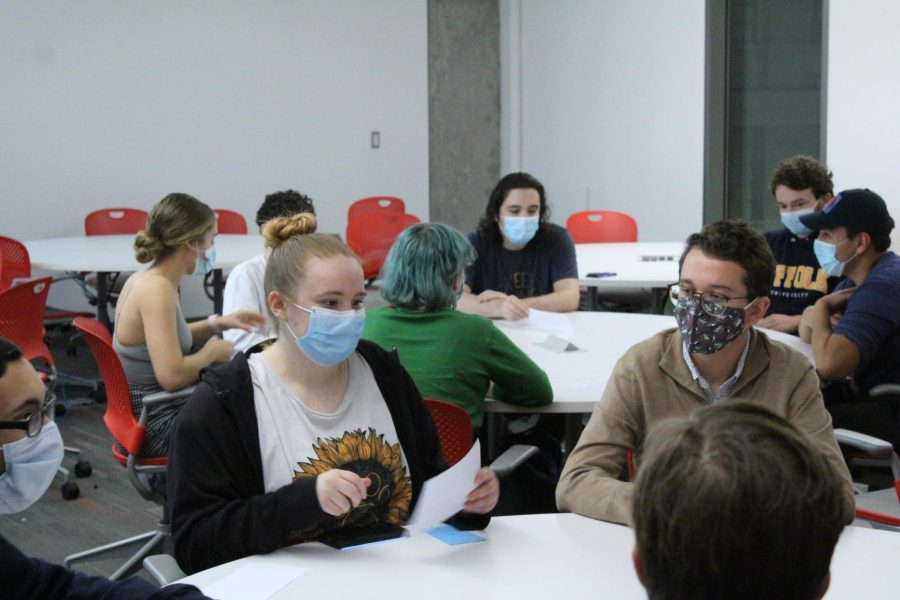 Attendees engaged in civil debates surrounding their own definitions and experiences with cancel culture and accountability.

“[Our goal is] getting people to come together, from different backgrounds, different perspectives, and just talk about how they perceive issues, and how they feel about issues,” said Matthew Albanese, a junior at Suffolk University and an ambassador for Suffolk Votes.

Participants began the panel by introducing themselves to one another, and giving personal facts and anecdotes. The discussion was facilitated by a member of Suffolk Votes as the groups tackled different questions about cancel culture.

“We hope that by hearing someone else’s experience in a heart-to-heart, eye-to-eye conversation, we can relate to each other a bit more. And while we might not agree, we can at least understand where people are coming from,” said Albanese.

“It was very interesting to see how everyone defined cancel culture in different ways and to understand different opinions on this topic,” said Gozzi.

He added that while he found the conversation valuable, he wishes his group had had more variation in beliefs.

“Overall, I really enjoyed the chance to have a constructive and safe conversation regarding this controversial topic,” he said.

Stephen Merrick, president of the Suffolk Democrats, said the panel was an opportunity for students of all backgrounds to debate in a controlled environment.

“I believe tonight’s event was a great way to bring together people of different beliefs and perspectives in an effort to have some civil debate and to find common ground,” said Merrick. “Suffolk Votes did a great job putting this together.”

Harry Murphy, a freshman broadcast journalism major and member of the Suffolk Republicans, explained that despite his fear of isolation, he was still able to feel comfortable in the discussion.

“As a Republican student, I feel that some may see the fact that I am in the Republican club here at Suffolk and assume certain things about me,” said Murphy. “I cannot say enough about the kindness and respect that I was met with.”

To choose the topics of discussion, Suffolk Votes conducted an internal poll, and then deliberated which issues are most aparmount to society today, according to Albanese.

“Cancel culture, polarization, the American dream, the truth is these topics, […] if we don’t answer them, will tear us apart,” said Suffolk sophomore Anthony Coviello, member of the Suffolk Democrats.

This was the first of three panels on social issues Suffolk Votes is hosting in the month of November.

Murphy echoed Albanese’s point, and said discourse in this manner is a key step in making the university a more inclusive place.

“Often in our society, there are very sensitive issues that one may feel uncomfortable discussing with people of different belief sets, but conversation opens the door to civil discourse and creates a welcoming and inclusive environment for all,” said Murphy.

There will be two more panels discussing polarization and the American dream on Nov. 16 and Nov. 30 in Samia 214. All students are welcome to attend.

William Woodring contributed to this article.