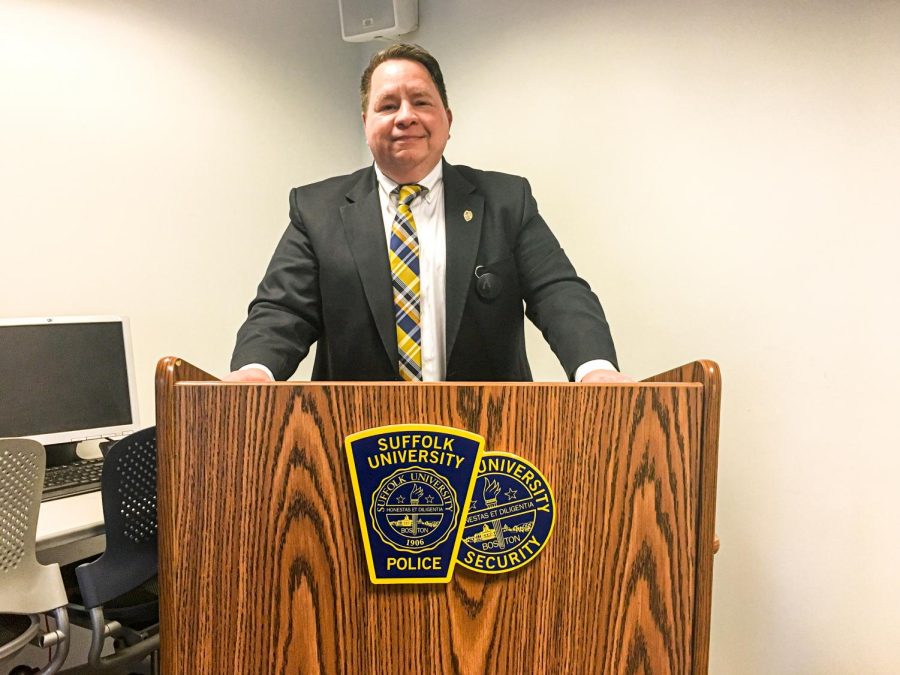 SUPD Captain James Connolly will serve as interim chief once Walsh retires on Nov. 14, according to a LinkedIn post from Walsh that was posted on Saturday.

“I want to thank each and every employee of the Suffolk University Police Department for their hard work and commitment to the university,” Walsh said. “They have worked extremely hard during this pandemic. This has certainly been a challenging time for the department, but they continue to serve the community day and night to keep everyone safe.”

Walsh started at Suffolk as a lieutenant, progressing to the role of the university’s emergency manager and then the interim chief of security and police for SUPD in November 2019, after former chief Gerard Coletta stepped down to head the police department at Tufts University. Walsh was made permanent chief of police in March 2020.

“My time at Suffolk wouldn’t have been possible without Chief [Gerard] ‘Chip’ Coletta taking a chance on me,” Walsh said.

Walsh’s policing career began at age 19 when he was a dispatcher in Danvers. Afterwards, he worked as Wenham’s deputy chief and police chief, and briefly worked in campus safety as the chief of police at Endicott College. Walsh has also sat on the boards of the Greater Boston Police Council and the Massachusetts Chiefs of Police Association, along with serving as the president of the Essex County Chiefs of Police Association.

Connolly came to Suffolk with Walsh in the summer of 2013, and the two have been working closely together ever since.

“While I am sad to see Ken leave, I am excited for the opportunity to lead SUPD. Ken has done a great job as chief and I wish him the best in his next career,” Connolly said.

As interim chief, Connolly said he is aware of the challenges that come with the job but is committed to getting things done correctly and keeping campus safe.

“My first goal is to continue ensuring the safety of our students, faculty and staff.  I will also continue to work with the Boston Police Department in addressing crimes involving our students and other quality of life issues in the campus area,” Connolly said.

The captain also hopes to restore faith in police that he believes has been lost in the last few years. This includes making sure that officers are properly trained.

“I will be working closely with the Municipal Police Training Committee to ensure that all of our officers receive the best training possible, including CPR, first responder, Narcan, diversity and inclusion, mental health and de-escalation tactics,” Connolly said.

While Connolly has spent time state’s homicide unit and crime lab, he believes that college policing has become more complex and is also extremely busy. Walsh had echoed a similar sentiment in his retirement post on LinkedIn, believing that most people do not realize how much goes on in the world of higher education.

He also believes that Connolly is the right person for the job.

“I think the world of Captain Connolly and I have no doubt that he will continue to serve Suffolk well in this role,” said Walsh.

Both Walsh and Connolly were a part of SUPD when the student government association and campus officials debated in 2019 whether to arm the department’s officers. During a campus safety forum in 2019, former Chief Gerard Colletta advocated for Suffolk to arm its police force.

Connolly spoke on the issue in the forum, saying the department would want to arm its officers with handguns and not long guns, due to safety concerns of shooting through walls or hitting people on Boston’s busy streets.

SGA voted to arm the department in spring 2019, while CAS faculty voted that fall to not arm SUPD. Since then, no further action has been taken on the issue, which would have to be approved by Suffolk’s Board of Trustees for any change to occur.

According to University Spokesman Greg Gatlin, the process for the selection of a new police chief is still under discussion. Connolly expects that the transition will be a four to six month process, and until then will remain interim-chief.

Connolly hopes to be a part of the transition team for the new chief to ensure a smooth change of power.

After his time at Suffolk comes to an end, Walsh said will go on to be the Northeast Regional Sales Manager for Pro-Vision video, a company that supplies police equipment to police departments, including body cameras and hardware and software systems.

“As I move on to my next journey, I will always be thankful for this fantastic experience,” Walsh said. “I am looking forward to working in a field that assists in the safety of the police officers in the profession that I love.”