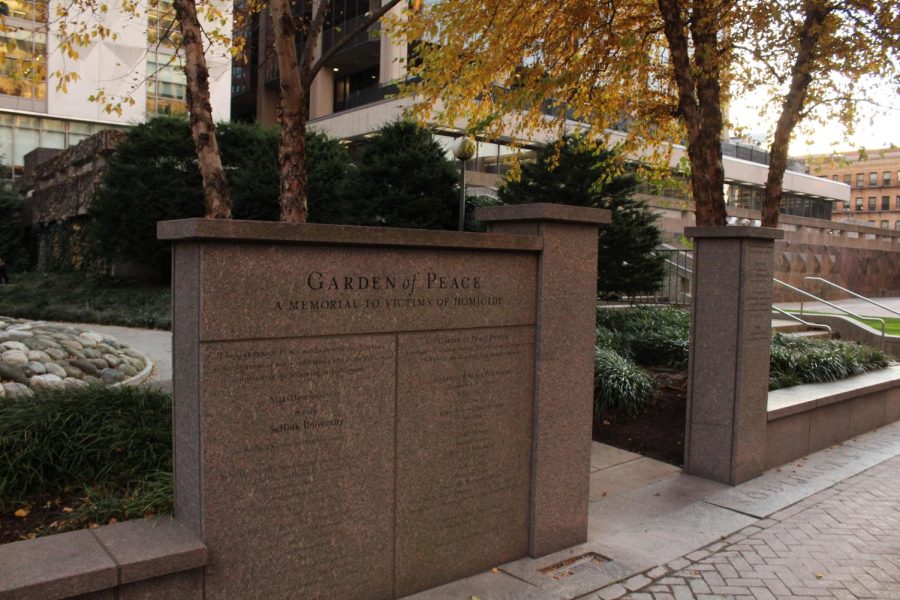 Garden of Peace memorial outside of Samia

Many Suffolk University students pass by the Garden of Peace on their way to class each day. While most walk past the memorial, located on Somerset Street right next to the Samia Café, without another glance, the garden is a significant spot in Boston.

The Massachusetts state legislature passed a bill in 2000 allowing the redevelopment of the Saltonstall state office building, which sits just behind the Samia Academic Center, to now include the memorial on its property.

The Garden of Peace was established as a non-profit organization staffed entirely by volunteers in 2001, and was unveiled in 2004 to be “an enduring reminder of the impact of violence and a visual testament of the need to eliminate it,” according to the state’s website.

Since then, approximately 1,100 names have been engraved in the garden.

“I think it’s important for any city to have a space that is quiet, contemplative, in order to go and reflect,” said John Nucci, Suffolk senior vice president of external affairs. “Those individual rocks with people’s names on it, those are real people, and their death has affected their families in so, so many ways.

“It’s important for us not to forget the importance of working to prevent violence, in our city and across the country,” he continued.

Nucci is now a part of the board of directors for the garden, but his relationship with the organization has not always been easy.

Some Suffolk students have never stepped foot in the garden, despite being directly next to campus. Others think it might have more of an impact if it were located somewhere else.

“I feel like it needs to be in a bigger and busier area,” said Megan Riccardi, a sophomore at Suffolk. “It feels as though it is tucked away in the corner.”

There was concern about how the construction of Samia might affect the garden, however. Nucci, who was the director of the project, oversaw demolition plans in order to build the academic center in the 2010s.

“The whole garden was there before Samia, it had already been an established entity,” said Nucci. “We changed the landscape of that area quite a bit.”

The construction of the new building concerned the memorial’s board of directors, as well as Bostonians.

“In the process of getting approval to construct a new academic center for the school, we had to work with neighbors and abutters. The Garden of Peace was a very important abutter and neighbor,” said Nucci.

Nucci explained the importance of respecting the feelings of concern from the board.

“They really have a very somber and peaceful location there,” Nucci said. “What they have done in terms of honoring victims of violence is important, and we wanted to have a good relationship with the [garden] as we went forward with constructing the Samia building.”