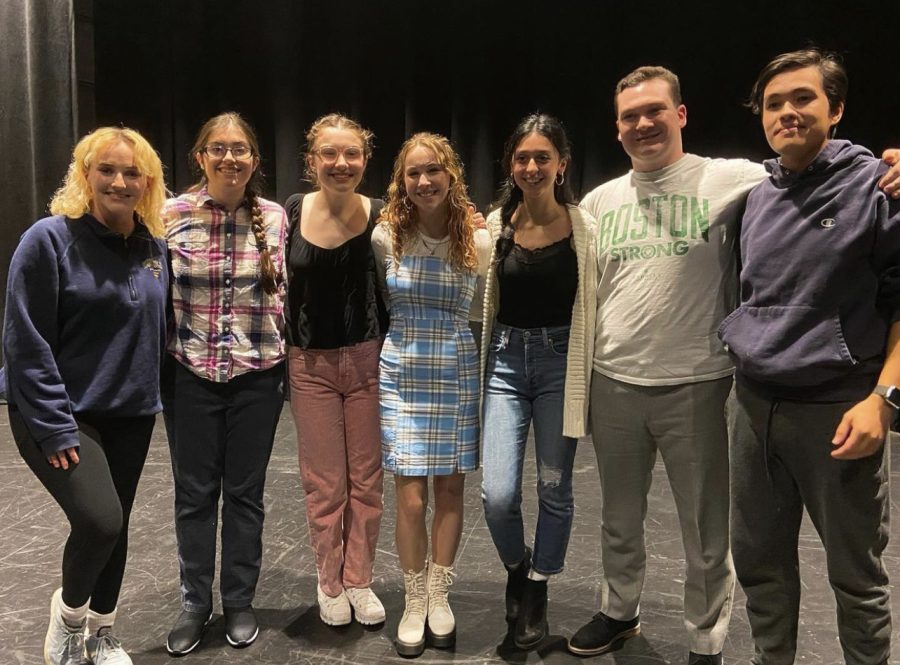 Lily Ayotte (center) and the cast of "Put to Rest."

On Nov. 5, the curtain rose on Lily Ayotte’s senior capstone project “Put to Rest.” The 45-minute show was emotional and captivating as it reminded the audience of the ongoing problem of sexual assault.

The play takes place in the 21st century when a young couple move into a house that is haunted by the ghost of “Alice,” played by Jackie MacAvery. Wednesday, played by Melina Karpouzis, has a spiritual connection to Alice, and helps guide her through her memories to solve her murder.

Through flashbacks to the ‘60s, Alice relives her life with her husband and the moments leading up to her attack as a spectator to the scene. She witnesses herself being assaulted by her husband’s boss, and later being murdered by her husband after she confronts him about the assault.

Alice grapples with the fear and horror her younger self, played by Mary Mahoney, faces and must come to terms with her death.

Ayotte began writing Alice’s story in the beginning of spring 2021 for one of her theater classes. It began as a simple scene, inspired by her own personal story.

“It was mostly driven by the fact that I wanted to give a personal story to something that has become so political,” Ayotte said. “Alice kind of embodies this woman that I feel a lot of women were in the 1960s, because they couldn’t speak their mind. I feel like that is relatable to a lot of women in most generations.”

Alice was a very outspoken woman who was not afraid to share her thoughts and opinions on what was considered “male matters.” The men in her life didn’t like this, and it ends up being one of the instigators for her assault and in the end, murder. This is an issue that many women face today, especially in the workplace.

She hopes that the extreme nature of her play will remind audience members how important it is to take action against sexual assault.

After Ayotte wrote the play, she gathered her stage crew and cast herself, and then later directed the production. She notes how thankful she was for her stage managers, Mea Sangiacomo and Kendyl Trott.

“The people who worked on [this project], the people who are in the program mean the world to me. This whole project wouldn’t be possible without the people in it. They were all absolutely brilliant. Very talented people and I love them all,” Ayotte said.

One of the biggest lessons Ayotte learned through making the show was the power of her own strength. She was in charge of everything and things would only get done if she was the one to direct and delegate.

She also notes the challenges of conveying such a personal story to people while remaining emotionally distant herself; a challenge she and her cast faced as they attempted to get into the minds of the characters.

In a final sign off, Ayotte tells the next class of theater students here at Suffolk to remember the constant evolution of theater and show business.

“Everything you learn about theater is going to remain true up until the point you want to change it. I think just keeping your head on straight and knowing what you want to fight for is really important,” Ayotte said.  “Do what you can but also change what you can, and listen while you are doing it.”

After her graduation this coming spring, Ayotte is planning on pursuing a career in film acting. Her main goal is to continue her passion of creating art and expressing herself with her acting.