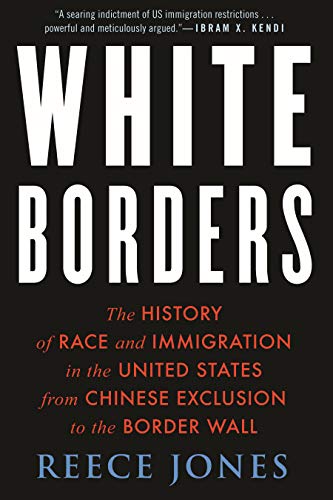 Author Reece Jones discussed how the U.S. must grapple with its current immigration laws and how these policies have evolved over time at The Boston Public Library on Oct. 30.

Jones wrote the book “White Borders: The History of Race and Immigration in the United States from Chinese Exclusion to the Border Wall” and is a professor in the department of geography and environment at the University of Hawai’i. He has researched immigration for over 20 years.

Jones has written other books on the topic of borders, including “Violent Borders: Refugees and the Right to Move” and “Border Walls: Security and the War on Terror in the United States, India, and Israel.”

The talk was hosted by Garrett Dash Nelson, the president and head curator of the Leventhal Map & Education Center at the Boston Public Library.

Nelson started the conversation by asking Jones what made him decide to investigate the history of borders.

Jones’ previous book came out right before the 2016 election. Donald Trump’s campaign, which criticized immigrants and the nation’s immigration policies at the time, along with promoting the construction of a wall at the U.S. border with Mexico, made Jones want to learn more.

“I went back and looked at the U.S. immigration laws and tried to understand whether the way that Trump and his campaign talked about immigration was out of the ordinary.org was it something that had a long historical trajectory in the U.S.,” Jones said.

“What I found is that it certainly fits well within the history of the relationship between race and immigration in the U.S,.” said Jones.
Something that Jones said always surprises people is that the U.S. didn’t have any federal immigration laws until 1875, and that the Constitution prohibited any limits on immigration to the U.S. until 1808.

When asked about how the politics around race, immigration, nationality and class have continued throughout this nation’s history, Jones brought up a part of his book where he talked about the similarities between the different eras of immigration laws.

“You could read the speeches of the people who want to limit Chinese immigration in the 1882 [Chinese Exclusion Act], and they sound a lot like Republicans today,” Jones said. “The language is about the Chinese as an invading force that are unarmed but coming to take over the United States and displace the white population, it is the exact same language we hear today at the U.S.-Mexico border.

“We also see, I think, some similarities in this idea of replacement, that comes up over and over again in these different eras,” Jones said. “Although the positions of the people saying it have switched through history, the language that they’ve used to talk about immigration has, really surprisingly, stayed very similar.”

Nelson asked Jones about what kind of future he would like to see for the U.S. borders after having done all of this research.

“A world where people are free to enter the United States, but if they do, they pay taxes here and they abide by the rules here and they can become a member of this community,” Jones answered. “I think that that’s the future world we should try to envision, and I would suggest that the more radical position is the one that the U.S. should exclude people based on their race and their identity.”

Jones also spoke about what kind of political movement he would advocate for that could push for more open borders.

“What I’ve argued for in the past is a world where there is free movement. Where people are free to move from one place to another, so that we don’t have these strict rules about immigration, but instead accept the fact that movement is a fundamental human right,” he said.