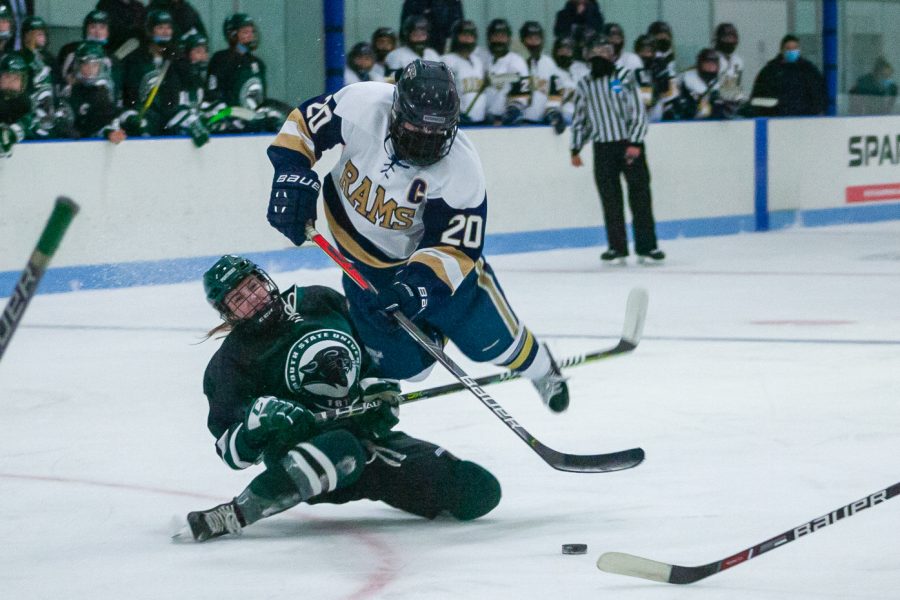 On Friday night, Suffolk University hockey dropped the puck on their first full season since 2019.

The men’s team opened up the season in their home arena in Charlestown against New England College, while the women hosted Plymouth State in East Boston.

The men’s team fell behind early on with New England scoring a goal  just eight minutes into the game.

From there, the Rams failed to find their footing. They were unable to get consistent offense going and New England College took advantage of that. They added a goal in the first minute of the second period as well as another early goal in the third. The Rams ended up losing the game 4-0.

“Our lack of discipline in a few areas of the game really hurt us, not just with the penalties, but our inability to get the puck deep,” said men’s head coach Chris Glionna.

Despite the disappointing play, Glionna did mention that there were bright spots in the team’s performance.

“Junior defenseman Adam Romano played very well,” Glionna said. “He didn’t quit, was blocking shots in the last few seconds. I was very happy with him.

“I was [also] happy for Jarret Bovarnick, who got the start in net today,” Glionna said. “Jarret didn’t get to play last year. He’s worked super hard; he deserved the opportunity and I thought he played pretty well.”

Meanwhile in East Boston, the women’s team seemed to be firing on all cylinders as senior captain and CCC player of the week Shana Cote buried the first goal of the season for the Rams just 8:36 into the game.

“Playing with [Cote] is incredible,” said junior forward Sofia Scilipoti. “I’m very fortunate to have her on my line. She kind of mentors me on the ice, tells me where to be, talks to me on the bench and that’s been really huge for me in that regard.”

Scilpoti added to the lead with her first collegiate goal moments after getting out of the penalty box, making it 2-0 in the first period.

Plymouth State took one back just seconds before the end of the first period making the score 2-1 Suffolk, but the Rams came roaring back in the second as Cote netted another goal.

Plymouth State scored one more goal in the second, but goals from graduate student Maddy Burton and senior forward Sydney Tietz propelled the Rams to an eventual 5-2 victory.

The women kept the momentum going on Saturday as they traveled to Dorchester to take on the UMass Boston Beacons.

Unlike the game the night prior, the Rams had to play from behind early as the Beacons scored just 46 seconds into the game.

Suffolk fought back with goals from Scilipoti and Cote to earn a 2-1 advantage at the end of the first period.

The second period was a struggle for Suffolk as they were unable to get the offense going. Meanwhile the Beacons were able to score a pair of goals to give them a 3-2 lead heading to the final frame.

Despite Suffolk putting the pressure on early in the third, the Beacons were able to counter with another goal, extending their lead to 4-2.

“It’s never good when you go down by two because then you have to come back with three,” said senior captain Madi Duff. “Once they got that fourth [goal] I remember yelling down the bench, ‘We basically had a whole period, lets relax, let’s regroup and lets just go out and do what we can.’”

That’s exactly what the Rams did, as they scored three unanswered goals, the first by Cote which was her fourth of the weekend.

Sophomore forward Vannessa Stewart then scored her first collegiate goal followed by senior forward Jesse Kennedy scoring the game winning goal with about a minute left. The final score was 5-4 in favor of the Rams.

Saturday’s comeback propelled the women to a 2-0 start, while the men dropped to 0-1. Both teams will face a home-and-home.

The women will travel to Worcester State this Friday, then host the Lancers for a 4:50 p.m. matchup on Saturday at Louis E. Porrazzo Memorial Rink in East Boston.

The men host Wentworth at 7 p.m. Friday night at Emmons Horrigan O’Neil Memorial Rink in Charlestown, then will travel across town for another meeting with Wentworth on Saturday at 5 p.m.

“We hope that more of the student body can come out Friday night,” said Glionna. “That’s a big game. It’s the first conference game of the year and we’d love to have as many fans at the game as possible.”

James Bartlett contributed to the reporting of this article.