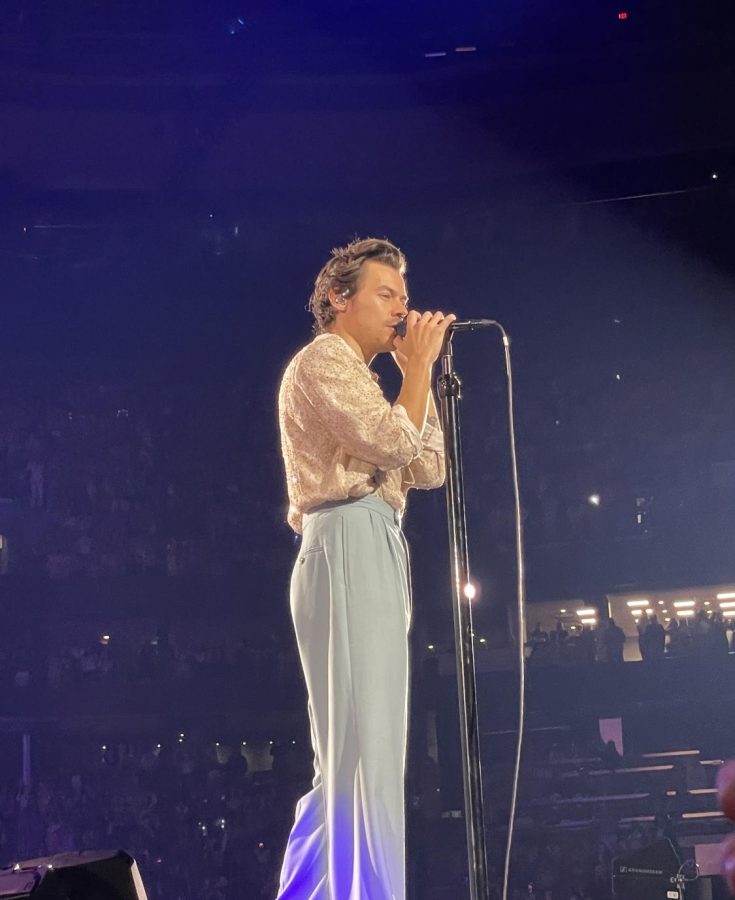 Harry Styles brought his Love On Tour concert to Boston on Oct. 25.

People of all ages lined up outside of TD Garden for hours, and even days, prior to the night of the highly anticipated Harry Styles Love On Tour concert on Oct. 25.

Many braved the cold, wet weather of autumn, waiting in line to get floor seats nearer to Styles. For those, the wait in the long line is worth the chance to see Styles in the flesh.

The audience had high expectations for the performance and Styles delivered. The concert was loud, bright and beautiful.

Harry’s heeled feet click-clacked across the stage in a fury as he bounced around the arena, singing expertly and perfectly hitting the notes to songs that have topped the charts for weeks.

He played hits like “Watermelon Sugar,” “Sunflower,” “She” and even an ode to his One Direction past with “What Makes You Beautiful.”

He made sure throughout the show to give attention to every side of the arena by prancing to-and-fro across the stage while he sang his greatest hits.

He interacted with the crowd and the band often with both in high spirits. Styles and his band proved their professionalism and dedication to create a meaningful show during their performance.

Tickets for this tour were originally purchased in June 2019 for July 10, 2020, before the pandemic postponed the concert. For many, this was their first concert back in person.

Tickets were remarkably expensive, around $300 on StubHub for balcony seats. This was expected due to Styles’s popularity, especially in a city like Boston.

Styles displayed his talent as a natural performer and was profoundly trained to make sure viewers got their money’s worth. He pours his heart and soul into every show and leaves nothing on the floor but pieces of feather boas.

It was agreed among screaming, singing fans that his performance was authentic and fun, but also seemed methodic.

Marina Montalto, a Suffolk student, detailed how she had “never felt such bliss and chaos at the same time.”

Styles had obviously been touring for months, playing the same set of songs over and over for young audiences screaming their absolute guts out to get his attention.

The words he spoke in between songs were rehearsed, yet shared a genuine message. He described how he loved Boston and was happy to be back. This, assumingly, was authentic considering he stayed in Boston for a week prior to his show.

To enter TD Garden, proof of full vaccination or a recent negative COVID test was required. Masks were also required, yet many guests walked around with them off. It was assumed crowds would be reduced due to the ongoing pandemic, yet seats were slammed together in vast crowds so much that one couldn’t move and arguably, this was a typical pre-pandemic concert experience. Something about that aspect was familiar and felt normal, but for better or for worse, it was agreed by guests that Styles was worth the risk.

Young girls dominated the concert halls as they passed each other, excitedly complimenting each other’s outfits and discussing how methodically they picked them out for this specific night.

Styles is well known for his bold outfits that show both his iconically feminine and masculine features. He commonly wears flared pants, glittery outerwear, feather boas and colorful suits to his shows and the crowd had a great desire to match his energy.

Those that had previously attended a Styles concert in different cities were informed of the preferred attire for this event through social media. TikTok and Instagram were shrouded in “What I’m Wearing to the Harry Styles Concert” videos. Pre-planning for the outfit of choice was required for any concert attendee as many dressed to the nines to show their dedication to Harry.

People from all over diversified a sea of colorful costumes and clothing, eager to see England’s sweetheart. Throughout the venue, loose boa feathers that many in the crowd wore were scattered, covering the floor in different vibrant colors that served as evidence of the concert.

Seeing Styles live in concert was one thing to look forward to, but half the fun of the show was preparing for it. For concertgoers, showing off the outfit of the night was essential to the concert experience.

The Harry Styles fan experience was attained and it was nice to meet other fans and bond over screaming, singing and crying to every lyric. The best part of every Styles concert is meeting like-minded fans who share the same passion.