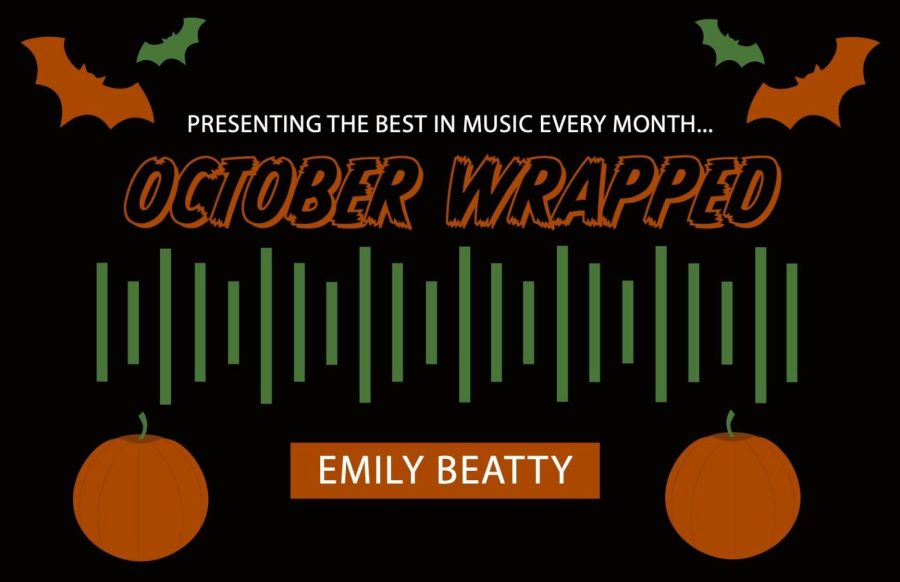 Halloween is over and the holiday season is quickly approaching. For those who like to celebrate early, break out the Mariah Carey and get into the Christmas spirit as the rest of us enjoy pumpkin flavored everything for a few weeks longer.  We’ll celebrate October just a bit longer in order to discuss the best new releases from the month!

Although October was a slow month in terms of big-name releases, there were lots of announcements and building anticipation for upcoming winter drops by popular artists.

As always, you can follow along to this month’s top picks on my Spotify.
“Easy On Me” by Adele
Pop star Adele teased fans for weeks about her new upcoming album, titled “30,” posting the number on various billboards around the world. On Oct. 15, she took to social media to announce the album release date, Nov. 19, and dropped her first single in six years, titled “Easy On Me.” The song is one all Adele fans should have seen coming: a strong ballad that is heart wrenching, to say the least.

Her voice is as strong as ever, and Adele remains a pop princess by dominating streaming services, air time on the radio and breaking records to become the most streamed song in 24 hours, with 24 million streams. The song seems to be a form of an open letter to old lovers and new, asking them to handle her with care after such a difficult past. Fans can expect a good number of songs similar to the lead single, as the singer’s high-profile divorce from Simon Konecki has been a major life event since her six-year hiatus began.
“Faces” by Mac Miller
What is known by many to be his magnum opus, Mac Miller’s “Faces” has finally been released commercially and on all popular streaming platforms. The mixtape was originally released for free in May 2014, but has since been remastered in the years following Miller’s death and made its appearance on streaming platforms on Oct. 15. The longest in his discography, the album follows Miller through a cocaine high, and tells the story of being a 22-year-old addict in the music industry.

The album itself is arguably the best Miller has ever produced. At such a young age, Miller’s raw and intense honesty takes on the burden of telling the story of what it’s like to battle a drug addiction, and despite the more upbeat-style of the songs, Miller beautifully toes the line between warning the listener of the hell he is facing and romanticizing something so commonly justified by other artists. The lyrics and beats are interwoven phenomenally, as any Miller fan would expect, and yet they make the listener feel as if they are inside of Miller’s head, listening to his stream of consciousness as he thinks it. Miller plays with the genre of jazz throughout the album, and the instrumental adds a unique flair to the hip-hop album that only Miller could have accomplished.
“Present” by Khalid
Khalid is back with a new single, released on Oct. 22, after being fairly quiet throughout the COVID-19 pandemic and only releasing a handful of singles throughout 2021. Khalid was popular on the pop charts after his debut album “American Teen,” but hasn’t been a frequent flyer since. This new single is part of the reason why.

Very Chris Brown-esque, the R&B vibe just isn’t working. The lyrics were mediocre at best, especially for someone who produced songs such as “Vertigo” and “Salem’s Interlude” off of the “Suncity” EP. The cover art is aesthetically pleasing, and the vocal quality is incredibly high. Khalid is talented and has potential, but he should move away from the overly complicated riffs and beat-based backtrack and move back to a place where his raw vocals can shine with a more simple instrumental.
“Something for Thee Hotties” by Megan Thee Stallion
Megan Thee Stallion, in a surprise drop, has released a mixtape of her recent freestyles and a handful of unreleased tracks from her archives. The star took to Instagram on Oct. 21 to announce the album and paired the “gift” with a festive picture featuring herself dressed in red, devil horns poking out of her hair, a tail and the release date of Oct. 29 inked onto her skin.

The collection doesn’t have a particular theme or motif, making it more of a random selection. The songs all sound fairly similar and there is limited variation in terms of tone, beat and lyric writing. However, Megan does mix things up with a handful of interludes and personal sound bites and even has one song, fittingly titled “Megan’s Piano,” that features her talents on the piano. She also does a wonderful job of changing the conversation to push for normalcy and acceptance when it comes to female rappers singing and creating around “taboo” topics such as sex and sensuality. Megan also hinted that this would be her last drop of 2021.
“Telepath” by Conan Gray
Coming off of the release of his debut album in 2020, Conan Gray dropped his second single of the year on Oct. 29. His first album, “Kid Krow,” had popular songs such as “Maniac” and “Heather,” so he has a lot to live up to.

“Telepath,” his most recent track, is a perfect pop single with just enough quirkiness to be a standout song. Gray’s vocals are placed in a way where they are highlighted, and yet they don’t overshadow the wonderful production of the backtrack. The lyrics are catchy, but not so basic they become boring. Overall, the song checks all the boxes and should be a popular addition to anyone’s dance party playlist.