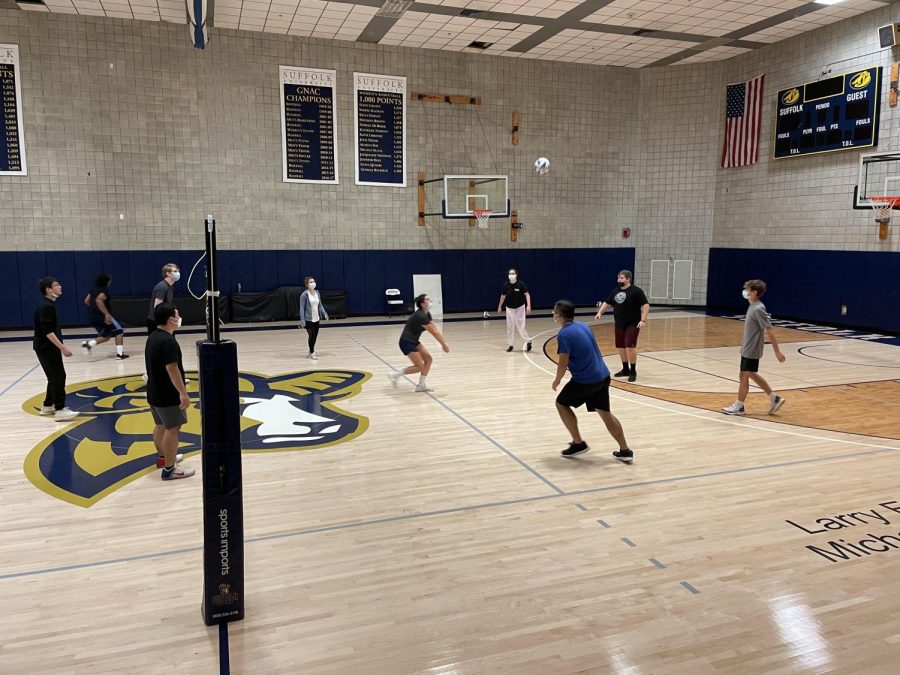 After dealing with many uncertainties the past few years, the Suffolk University Volleyball Club is looking to get back on track.

Jacob Murphy, a senior at Suffolk, founded SUVC during his freshman year since volleyball was a passion of his and the school does not offer a men’s team.

“Ever since I came here for orientation, I thought to myself, ‘I kind of want to start a volleyball club,’” said Murphy. “Volleyball is one of the few athletic sports that Suffolk doesn’t offer for both men and women. I just wanted to start the club so men could get involved in the sport as well.”

After the club was finalized during the spring semester of 2019, SUVC dealt with their fair share of obstacles. During Murphy’s sophomore year, the gym was unavailable to play on due to flooding at Suffolk’s Larry E. and Michael S. Smith Court, and just a few months after that, students were sent home due to the COVID-19 pandemic.

“It was a pretty big damper, our club was pretty quiet during that period of time,” said Murphy. “I’m just so glad that we are finally active again this year.”

Suffolk freshman Alfredo DaCunha was a four year member of his high school volleyball team and is appreciative of the chance to be able to continue playing here at Suffolk.

“I’ve had a great experience so far, it feels great to get back into volleyball,” said DaCunha. “Unfortunately there is not a mens team so coming here and being able to play is honestly such a relief.”

SUVC is a place where people of all genders and skill levels can come together and play volleyball casually or competitively.

“Anyone can come play,” said Murphy. “It doesn’t matter if you’ve never touched a volleyball before or you’ve played on a competitive team.”

SUVC allows you to sign up with a group of friends and form your own team. Over the next year, the club hopes to hold prize tournaments and partake in more outdoor events.

“We do have an outdoor net so I would like to play a lot more outdoor stuff like beach volleyball and grass volleyball,” said Murphy. “I am hoping to do some sort of big beach bash toward the end of the year.”

SUVC is also hoping to eventually start a space where other athletics clubs can talk with and support each other.

“I think it would make for a richer club sports environment at Suffolk,” said Murphy. “Intramurals are such a great way to not only be active but also make new friends at Suffolk.”

The club holds open court nights on Saturdays from 6-8 p.m. in Ridgeway and are always looking for new members to join.