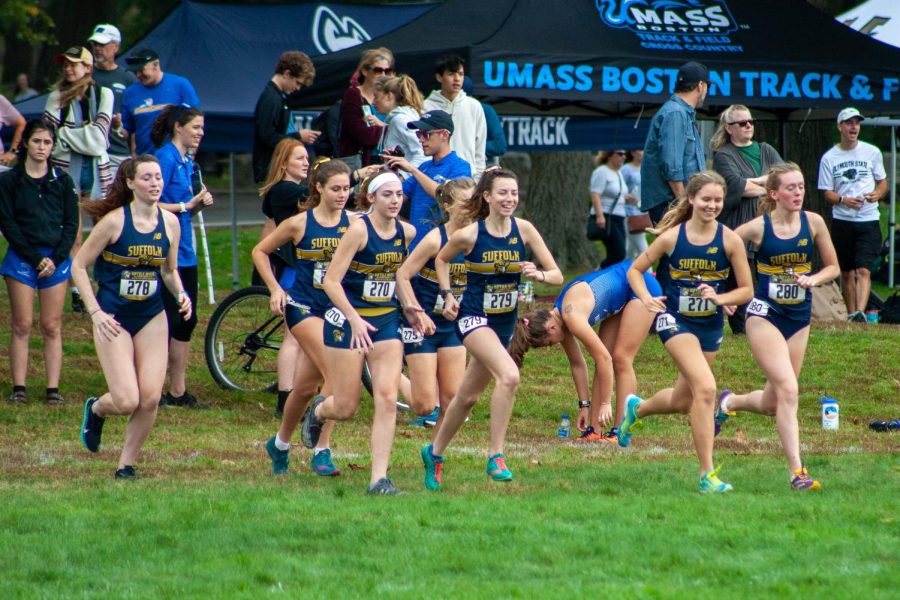 Members of the women's cross country team at the Franklin Park Invitational on Oct. 16

The Suffolk University women’s cross country team captured the Commonwealth Coast Conference title at the conference championship meet on Saturday at Western New England University. A team score of 73 was enough to propel the Rams over the University of New England, who finished second with 76. The title is Suffolk’s first CCC team championship since joining the conference at the end of the 2019-2020 academic year.

The men’s team finished in second, propelled by a first place finish from junior superstar Matyas Csiki-Fejer, who finished in exactly 25 minutes. Csiki-Fejer was named the CCC Runner of the Year, in addition to receiving the CCC Scholar-Athlete of the Year accolade. The Rams’ team score of 55 wasn’t enough to triumph over first place Roger Williams University (35).

Head Coach Will Feldman was named women’s Coach of the Year for leading his team to their first ever championship. Three Lady Rams earned All-CCC accolades: Gwen Koziara, Sydney Fogg and Skyler Spanbauer. Koziara was the first to cross the line for the Rams in 24:06, giving her a fourth place finish. Fogg earned fifth coming in at Koziara’s heels with a time of 24:08.

“At the end of the day, all the credit goes to the athletes,” said Feldman. “They’re the ones waking up for practice at 6:30, in Matyas’s case running 95 miles a week, the ones going through those mental battles on the course.”

“He’s coach of the year for the men’s too,” said Csiki-Fejer of Feldman. “You kind of have to put things into perspective, other teams in the CCC that have top guys have been good for years. They’ve had coaches who’ve been able to build up those programs based on the reputation of those programs, whereas Will, he’s taken us zero to 100.”

Three members of the men’s team were named All-CCC. A fourth place finish earned Nick Malm the honors along with 15th finishing Thomas Novy, in addition to Csiki-Fejer. Csiki-Fejer additionally picked up his fifth CCC Runner of the Week accolade.

“The standards he holds himself to are on another level than most people I’ve ever encountered,” said Feldman of Csiki-Fejer. “He is that 1% that will come across where he doesn’t realize he’s working as hard as he is.”

The women’s title came in spite of major injuries on the team. Feldman said two of the team’s top four runners were not able to compete on Saturday.

“They deserve so much credit for being really confident and resilient,” said Feldman. “The fact that we were able to pull this off with a defeated team is remarkable.”

The men’s team was also subject to unfavorable weather during their six kilometers of competition.

“The girls’ race was fantastic. Not only did the girls do really well, but as they were doing their warmups it finally cleared up a little, so they actually got to run without the rain,” said Csiki-Fejer. “As we stepped on the line, there was torrential downpour.”

The Rams will hope for better conditions when they host NCAA Division III East Regionals on Nov. 13 at Franklin Park.