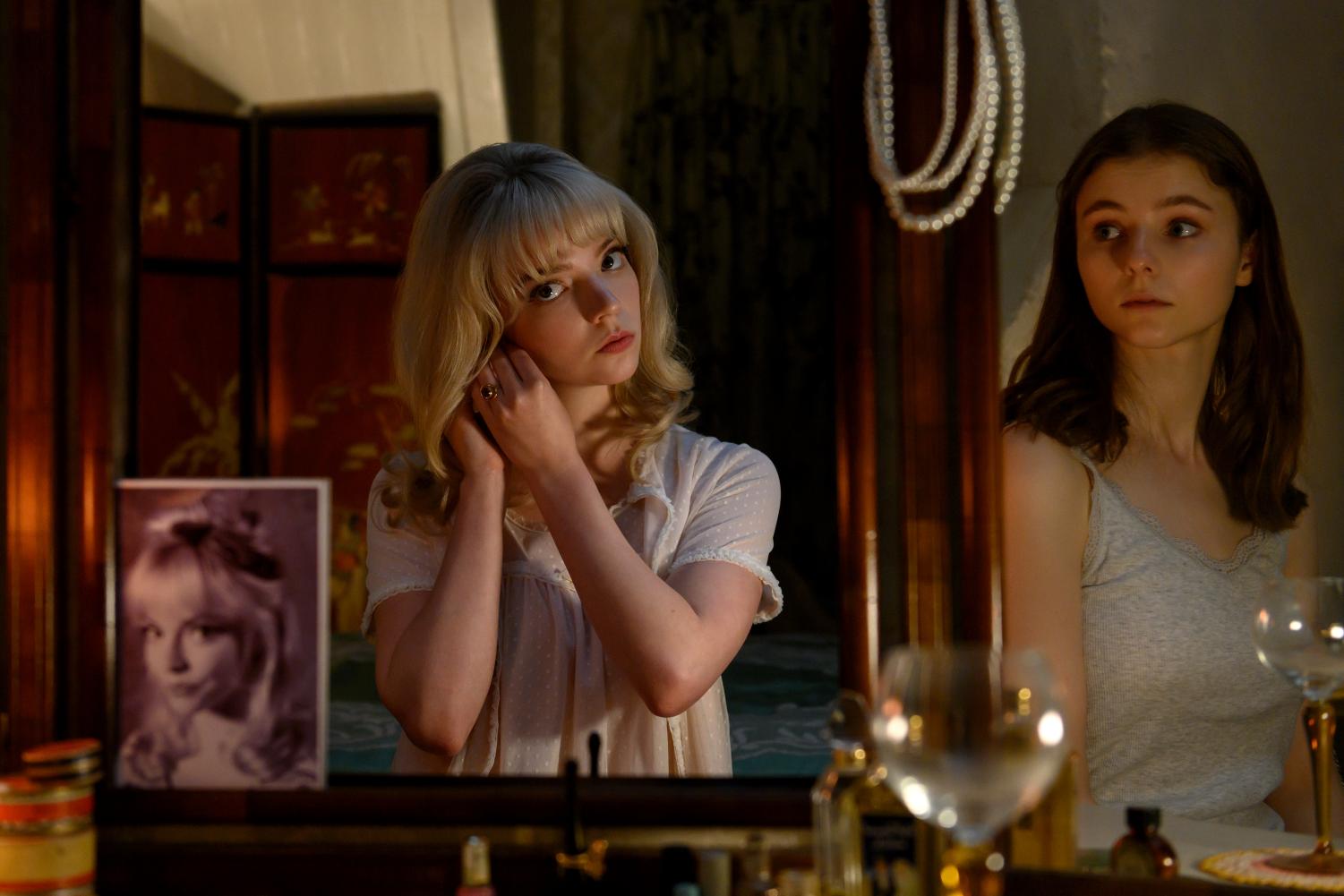 What happens in Soho, stays in Soho.

In Edgar Wright’s newest psychological thriller, “Last Night in Soho,” viewers are whisked away to the dazzling 1960s London where things aren’t all too great in downtown.

The two-hour film opens with aspiring fashion designer Eloise (Thomasin McKenzie) moving to London and she soon enters the past through her dreams, becoming enthralled with wannabe singer Sandie (Anya Taylor-Joy). But the glamour is darker than it seems as the past and present collide to reveal a shattering twist.

This cautionary, time travel tale of a girl following her dreams to the lively cobblestone streets of Soho is thrilling, captivating and nostalgic.

The swinging 60s was a major theme in the film. There was colorful mod fashion such as a magnificent peach-colored shift dress worn by Taylor-Joy, a glittering poster for Sean Connery’s “Thunderball,” eccentric makeup, music blasted from record players and a twisted underworld of crime in brothels.

This deep criminal history of Soho contrasted against the neighborhood’s energetic spirit and marquee signs. Wright takes these past crimes like murder and entwines them with the present day to haunt Eloise as faceless ghostly figures and the enchanting Sandie draw her into an unescapable, neon-fueled nightmare.

Eloise is obsessed with Sandie from the beginning and the costuming and makeup choices emphasize this fascination. With Sandie’s blonde luscious curls, active love life, fashionable looks and a spell-binding voice there’s no doubt why any teenage girl would want to be her. After Eloise’s first dream, she immediately copies Sandie’s hair and even buys the same long white coat Sandie wears while traversing the streets.

Wright also uses mirrors to represent this dual identity of Eloise and Sandie. Viewers first meet Sandie when Eloise looks into a mirror at a ‘60s nightclub and much of their interactions occur through reflection from telephone booth mirrors to dresser mirrors until it shatters and their storylines mesh together.

There was one breathtaking scene where Sandie was dancing with her pimp Jack (Matt Smith) and with each glide or twirl the camera switched back and forth between her and Eloise. In a movie full of beautiful shots, this was definitely a standout moment that was like magic.

The music choices in this movie were very in tune with Wright’s style. Wright is a pro at crafting his stories around sound design. His last film, “Baby Driver,” did just that and it was no shock that “Last Night in Soho” also utilizes synchronous sound from the characters to invite viewers into their psychedelic world and to move the plot along.

Eloise putting on headphones to escape from the present day and listen to ‘60s music like The Kinks and Sandie Shaw symbolizes her love of vintage culture, and it makes her feel safe. But all this crashes down when she digs into the secrets of 1960s London. This is shown in one scene where she frantically runs across Carnaby Street with “There’s Always Something There to Remind Me” playing.

Taylor-Joy also gives a mesmerizing performance in an empty nightclub of Petula Clark’s “Downtown,” with lyrics that are at the ghastly root of the story. The lights are brighter and things may be great in downtown, but only at the surface. Beneath the glamour of showbiz and fashion is a frightening nightlife industry that breeds the oppression and exploitation of women.

Taylor-Joy and McKenzie are two young stars that played their performances well off of each other. Coupled with their eerily similar looks they created the perfect balance of past and present London.

There were some questionable turn of events in the final act that became maddening as Wright lost his grip on the storytelling that was so strong in the beginning, but the bone-chilling scares and lively visuals make up for it.

The glitzy but horror-filled “Last Night in Soho” will leave viewers wishing they could be transported to the historic streets of London, but don’t dream under covers and gaze into mirrors too much.