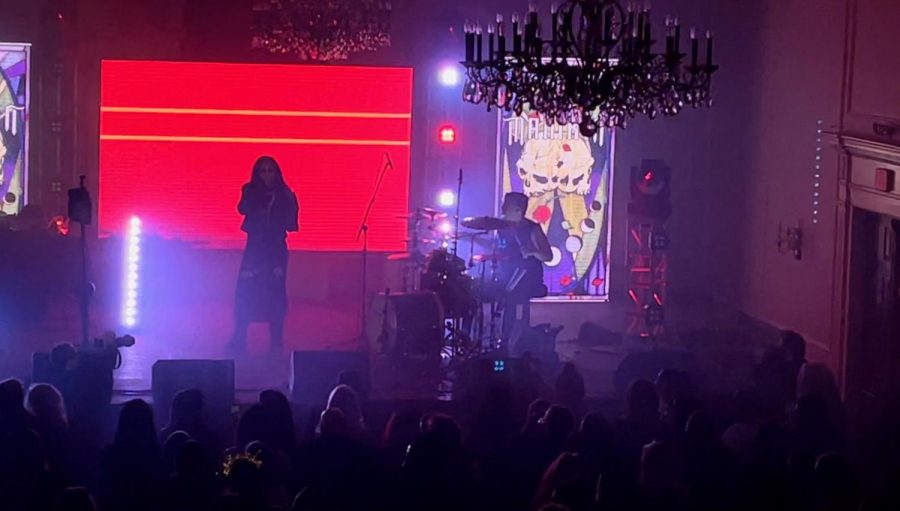 The band Man1k1n performing at the Endless Night Vampire Ball

Out of respect for the values held by Endless Night and Vampfangs, the last names of guests have been redacted to protect their privacy and preserve their experience.

On Oct. 23, the Endless Night Vampire Ball marked many firsts in the rich history of Salem: it was the first ever event that booked the entire Hawthorne Hotel for a full weekend, and it was the biggest gathering of vampires in Salem.

Benjamin Addam and Alexis Pharray, hosts of Saturday night and the heads of Vampfangs, heard Hawthorne did not generally book big events and were advised by the hotel not to.

“We’d like to take over the entire place,” Addam said. “We’d like you to not be able to get past the front door without being on our guest list.”

Guests were expected to follow a strict dress code, and these stylish vamps came prepared.

“Fashion is a huge, huge deal for us,” Pharray said with a swipe of both hands.

Pharray wore a golden crown in the shape of a sunrise with a tiny skull at the centerpiece shipped straight from the German artist MyWitchery. Her long blonde locks rippled past her neck and onto her sheer black Barcelona dress. The gown came printed with golden spirals on her train that swept the floor like a blossomed flower. Her black heels only added to her god-like height and posture.

Addam, with his well-kept dark-brown beard, matched Pharray in a black suit accented in gold, ordered from Sebastian Cruz Couture.

“The shoes are something else,” Addam said, directing attention towards his shiny gold and black loafers, finished with a vine and leafy print.

Guests and VIVs (Very Important Vampires) tucked and glued custom fangs to their teeth; they ironed out, sewed on, and even Amazon-bought costumes, capes and complimentary accessories.

Jasmine, a Christian Baptist from Pennsylvania, came to Salem for her birthday because it was the closest Endless Night for her.

“Every pretty girl should go to a ball!” she said, her auburn eyes full of excitement. She wore confidence with her black gown, and a silver crown grown of six roses and violet jewels at every end point.

Jasmine has known she’s a vampire her whole life. She said the vampire community is about inclusion.

Jasmine clarified living vampires do not drink blood. But that’s not the only thing people get wrong about vampires.

Addam and Pharray assured that people have never seen a party quite like the vampiric type. With the entire hotel sold out, every area was packed with fanged smiles.

On the second floor, right off the lounge overlooking the primary ballroom, a back-corner room was kept creaked open and engulfed in darkness, lit only by candle light.

Inside was a complimentary absinthe bar. A black draped table held what looked like a science fair of elegant glasses, and a spheric ice-cold water picture with two silver spouts and nozzles.

The bartender commented on the signature color change to the drink, and the specific way of getting it to turn green from yellow.

The process is slow, with only two sides to the picture dribbling water at once. It did not, however, discourage the growing line of vamps who chitchatted with excitement about upcoming sci-fi series like Dune.

Down to the basement, Hawthorne’s soundproof and silent library, poshly dressed people sat around walls covered in bookshelves, old Salem paintings and pictures, with one wall hanging a Ouija board, and across all walls, lots of mirrors and candlelight.

One could get lost in conversation, but if a guest cared more for dancing, it was time to see the ballroom.

Man1k1n, the lively band consisting of a lead vocalist and stick-twirling drummer, posted about their performance on their Facebook.

“We were proud to be the headlining band for this massive gathering,” they wrote. “The best show we’ve had to date.”

And as a note to their fans they wrote, “You really made the night special for us. You were all bloody fabulous.”