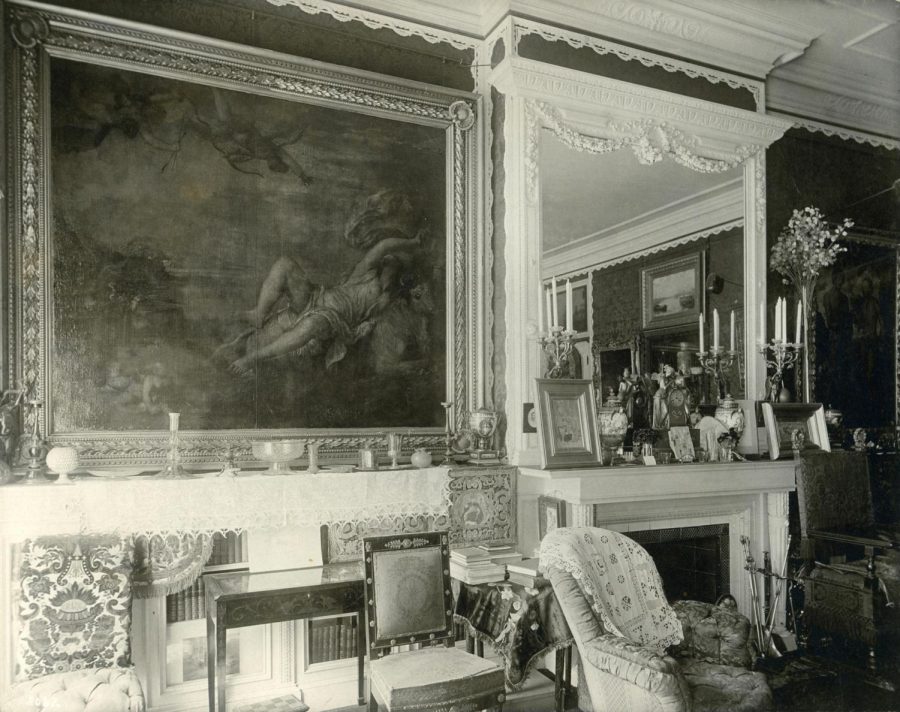 Titian's "Rape of Europa" installed in the Red Drawing Room at Isabella Stewart Gardner's residence in 1900.

Making its final stop at Boston’s Isabella Stewart Gardner Museum, the exhibit “Titian: Women, Myth, & Power” reunites the mythological painting collection done by Titian in the 1500s and gives visitors a unique chance to examine them together.

Along with The National Gallery (London), National Galleries of Scotland and Museo Nacional del Prado (Madrid), the Gardner brought the collection of Titian’s six poesie paintings together for the first time in over four centuries.

The center of the Gardner’s collection started with Titian’s “The Rape of Europa” when it was first brought to the museum 125 years ago. Bringing the remaining five paintings to Boston has conducted an incredible reunion that is creating intellectual conversations about this collection in and around the museum.

Titian’s poesie paintings were painted between 1551 and 1562 and were given to King Philip II of Spain. The poesie are also known as painted poetry and are inspired by the poems written by the ancient Roman poet Ovid.

These paintings also highlighted the power, justice, cruelty and fate that were aspects of the mythological poems. These paintings were done in such a way that the gods and mortals were merged together.

When first arriving at the exhibit, visitors are presented with an overview of who Titian was and what the collection contains before they enter the gallery room where the main exhibit is on display. Once visitors enter, there is a display case that contains items from the Gardner that tie into the exhibit, including letters written to Isabella Stewart Gardner about the “Europa” painting.

Once they walk through the display, visitors enter the main gallery room, which contains all six poesie paintings in Titian’s collection along with a portrait of Prince Phillip II of Spain and a portrait of Queen Mary I of England.

The gallery room is set up in the shape of a semicircle with the six main poesie paintings along the outside circular wall of the gallery and two portraits along the remaining wall.

As visitors make their way around the room, they view “The Rape of Europa,” “Perseus and Andromeda,” “Diana and Callisto,” “Diana and Actaeon,” “Venus and Adonis” and “Danaë.” Visitors are able to scan a QR code in the center of the gallery that brings them to a section of the Gardner’s website about the exhibit with a description and background of all of the paintings in the gallery.

This aspect of the exhibit was able to highlight the details and importance of the collection even more.

“Having the history behind the art is always a good addition,” said attendee Madelyn Kramer. “Reading the social and political climate behind the painting and why it was painted for that time is always a nice addition to an exhibit.”

The visitors were thrilled to be a part of the experience of “Titian: Women, Myth, & Power.” The powerful exhibit has drawn in many art enthusiasts from around the city, the surrounding area, and even other parts of the country.

“This exhibit is just extraordinary,” said Melissa Wynns from Chicago.

“I think it’s the fact that they’re here together. These are paintings we have all seen that perfectly demonstrate the level of power the movement that Titian still has,” said Wynns. “Each of the paintings individually are great, but collectively they are phenomenal.”

Many of the attendees of this exhibit are thrilled to see the collection together again; a rare yet amazing experience to see.

“Titian: Women, Myth, & Power” is on display at the Gardner from now through Jan. 2 and advance tickets are required.