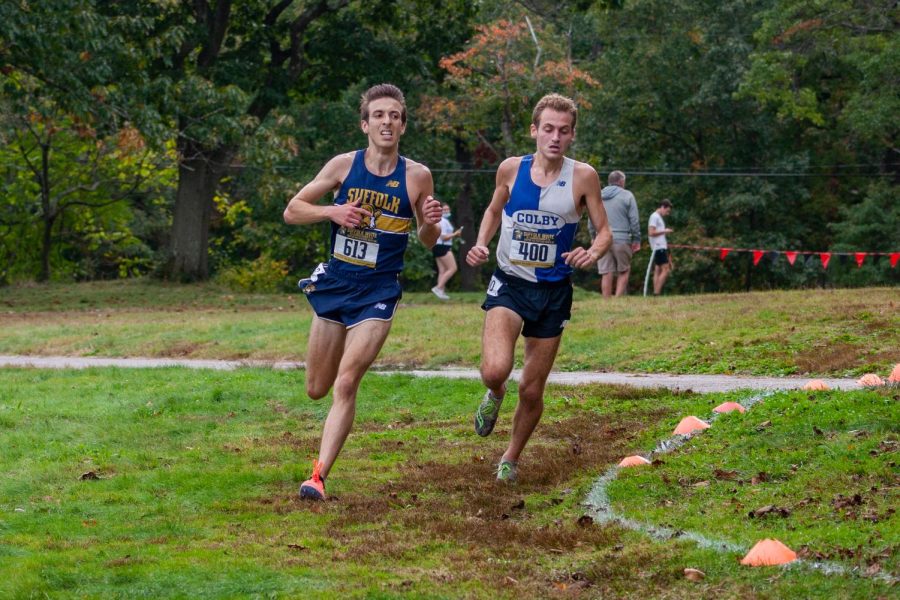 Franklin Park was host to the annual Suffolk Cross Country Invitational on Saturday, with over 1,000 athletes participating from 40 different programs around the region. This was the first Suffolk invitational since 2019, after a year-long hiatus due to COVID-19.

Ivy League schools Harvard and Dartmouth made strong appearances, with the Big Green winning the men’s meet handily with a score of 29 and five top-10 finishes. Wellesley won the day for the women with a score of 38.

Both Suffolk’s men’s and women’s cross country teams were the champions of the “Battle for the Boston Common,” a dual meet between Suffolk and Emerson that is a tradition at the event. Both teams’ scores were taken from their performances in the larger events. The women’s team defeated Emerson 26-30, with the men dealing the Lions a 15-47 blowout.

Suffolk track star Matyas Csiki-Fejer continued his historic season with a second-place finish in the men’s 8k with a time of 25:23. Csiki-Fejer went head to head with Colby’s All-American Tyler Morris, who set a meet record with a time of 24:38. Csiki-Fejer and Morris were neck and neck for three laps around the course, but Morris was able to gain separation on the final lap.

“I just had a tough day today. Sometimes you just have those days where you’re just not mentally ready to go for it,” said Csiki-Fejer. “And with this course in the woods, with how it’s really windy, if you get a little bit of space between you and the other person, you don’t even see them in front of you so it becomes really difficult to stick with them.”

Csiki-Fejer’s performance earned him his fourth CCC runner of the week award. His parents also flew out from his home state of Missouri, making the meet the first time they have seen their son run in Boston.

“I wish they came on a day where I actually ran well, but I suppose second is nothing to frown at and I should still have a better attitude,” said Csiki-Fejer. “It was a fun day and I was super glad to have their support.”

Captain and senior Hunter Toyoda’s parents made the trek from their home state of Washington. Toyoda is one of the longest-tenured team members currently on the team, and has seen it grow into the large program it is today.

“From when I was a freshman and we had nine guys and this meet was barely a thing, to go to this meet where there is 500 runners and we have 30 guys on the team, it just means so much,” said Toyoda. “It shows how much our coach has worked and how much the program has grown up in such a short period of time.”

On the women’s side, freshman Gwen Koziara was named the CCC Rookie of the week. She was the first runner from Suffolk’s women’s team to cross the finish line, finishing her 6k in 24:26, the best time of any CCC runner.

“Everything played out well. The course was really nice and I think [Coach] Feldman did a good job of prepping everyone for the race,” said Koziara.

Another star of the day was Buddy the Ram, who was rented for the event by cross country head coach Will Feldman. Athletes and spectators were able to come up and pet Buddy throughout the day.

“We just really tried to raise the production level of the event where schools like Harvard and Dartmouth are like wow, this was a really great race, we are coming back next year,” said Feldman. “In that sense, it was mission accomplished. If anything, we kind of go over the top.”

Feldman and members of the team mentioned how this meet was a logistical and athletic preparation for when Suffolk hosts the NCAA regionals at Franklin Park on Nov. 13.

“Now we know what it’s like to race the course,” said Koziara. “Also to have a bigger group, it’s going to go out really fast. It’ll be a fun race.”

The Rams will run next at the CCC Championships on Oct. 30 at Western New England before returning home for Regionals.