Red Sox walk off on Rays, move on to battle Astros in ALCS 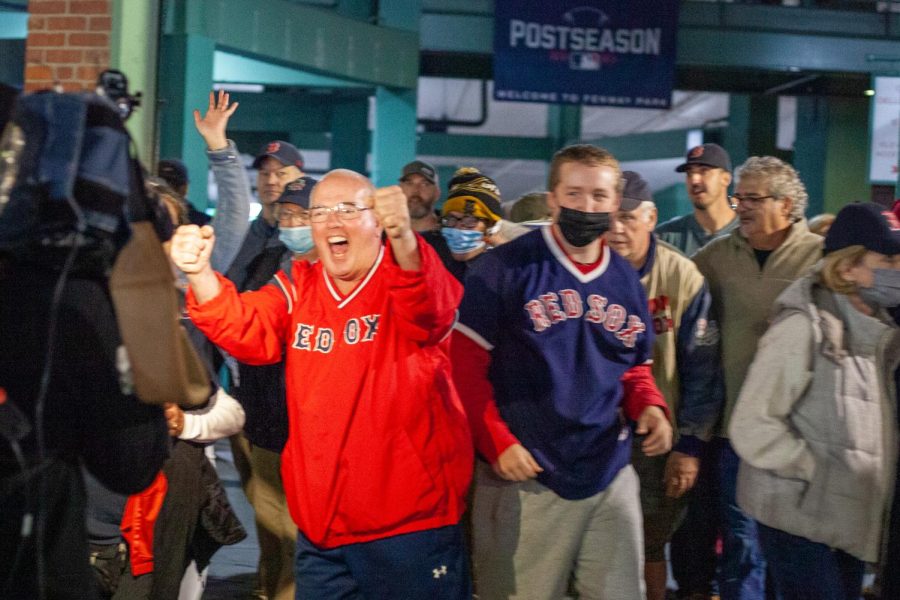 The Boston Red Sox defeated the Tampa Bay Rays in walkoff fashion Monday night by a score of 6-5, sending the Rays into the offseason and propelling the Sox to their first American League Champion Series (ALCS) since 2018.

Kiké Hernadez’s sacrifice fly in the bottom of the ninth sent Danny Santana tagging from third base, scoring and sending Fenway into a walk-off frenzy for the second night in a row. Christian Vazquez hit a three-run walk-off bomb to end Sunday night’s matchup.

“It was the best game I’ve been to in my entire life. The atmosphere, the sheer rawness of it all. It was pure Red Sox,” said Suffolk senior Dom Odoguardi, who was in attendance. “It was epic. I’ve never seen anything like it.”

Hernandez’s sac fly capped off an incredible series in which he tallied nine hits, including seven consecutive ones, a Red Sox postseason record. He has a summative .450 average this postseason and a 1.329 OPS.

“Here we are surprising everyone but ourselves,” said Hernzadez in a post-game press conference. “We knew in spring training we had a team to make it this far.”

There is reason to be surprised with the Red Sox sucess, as defeating the 100-win, Chaim Bloom-built Tampa Bay Rays was far from reality in some parts of the series.

The Sox dropped the first game 5-0, and almost blew a 5-0 lead Monday night, as the Rays came rallying back after the Sox put up five in the bottom of the third. That inning saw a Rafael Devers three-run homer to the center field corner and an Alex Verdugo double off the Green Monster.

The Rays’ comeback was propelled by a two-run homer from its superstar rookie Wander Franco in the top of the sixth. Back-to-back doubles in the eighth inning from Mike Zunino and Kevin Kiermaier ignited the Rays, with their star of the series Randy Arozarena singling to bring in Kiermaier and make it a tie game.

Garett Whitlock earned the win on the mound, coming in relief in the disastrous eighth inning. He proceeded to throw two scoreless innings, allowing for the Sox offense to go to work in the bottom of the ninth.

The walk-off series win was set up by a series of strategic hits by the sox. Vazquez singled to open the bottom of the ninth, followed by a Christian Arroyo sacrifice bunt. Travis Shaw singled, leaving pinch-runner Danny Santana standing at third for Kike.

“We’re out here proving everyone wrong,” J.D. Martinez said in a post-game press conference. “Everyone on this team is hungry and they’re on a mission.”

With the win on Marathon Monday, the Sox are one step closer to ending the two-and-a-half-year parade drought in the city of Boston.

“The energy at the parades are unmatched… but nobody thinks about what it takes to get there, unless you’re a baseball player or you’re on the team,” said Odoguardi, who went to the 2018 World Series parade. “Until you’re in the actual stands watching them, getting anxious, getting excited, screaming your head off, you don’t really realize what’s at stake. Being at this game, I understood all of that, the pain, the heartbreak, the excitement, the joy, all that building up.”

Coming up the Red Sox will be facing the Houston Astros in the ALCS. Houston defeated the Chicago White Sox by a series score of 3-1, demolishing them 10-1 in the closing game on Tuesday. This will be Alex Cora’s first postseason matchup against his old ballclub since his suspension for his involvement in their sign-stealing scandal during the 2017 season.

The ALCS will commence on Friday at Minutemaid Park in Houston at 8:07 p.m.