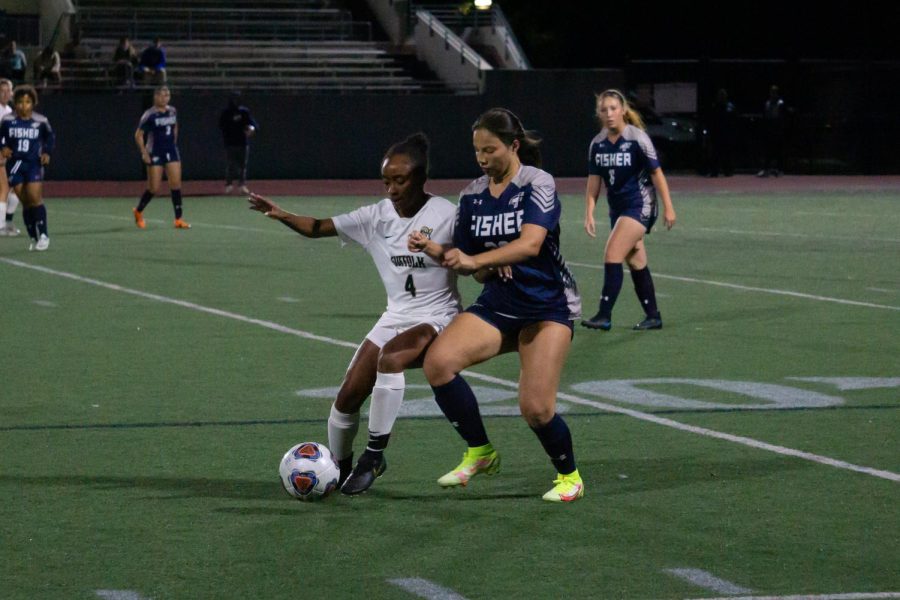 Suffolk women’s soccer earned their sixth win of the season Thursday when they dominated Fisher College in an 8-0 win.

“Phenomenal across the board,” said head coach Ashley Van Vechten. “Really, really pleased with the effort that we showed. Our intensity was there; the focus was there.”

The Rams started hot out of the gate with goals in the first 12 minutes from junior forwards Cassandra LaBarbera and Haley Long, along with first-year midfielder Kylie Flynn.

Suffolk commanded the rest of the first half, keeping Fisher from registering a shot. Sophomore midfielder Klaudia Rushi and senior forward Julia Hunt tacked on two more goals to give Suffolk a 5-0 lead at halftime.

“We do a good job of playing our own game, however the other team is playing,” Hunt said. “We never lack in our own abilities, so we go out hard to every ball no matter what.”

It seemed like the second half would be another long one for Fisher, as almost immediately first-year midfielder Chelsea Fallon netted her first career goal to give Suffolk a 6-0 lead.

Fisher was able to settle the game down and keep the Rams off the scoreboard for a while, but Suffolk struck two more times in the final 10 minutes. Goals from senior midfielder Carley Pearce and junior forward Nicole Morin-Trotta gave Suffolk the final 8-0 tally. Pearce’s goal was her first career score as well.

“I was just passing the ball and it went off the other team [and deflected in], but it was great,” Pearce said as she reflected on the goal.

Senior netminder Allison Rodrigues only faced one shot in the contest as she recorded her sixth shutout of the season.

“I think we played really well,” said Rodrigues about the win. “Our finishing, we were really on top of that.”

After visiting Western New England on Saturday, where the Rams lost by a score of 2-1, they currently hold a 6-3 record.

The Rams return to East Boston Memorial Park on Wednesday, when they will play Husson at 6 p.m.