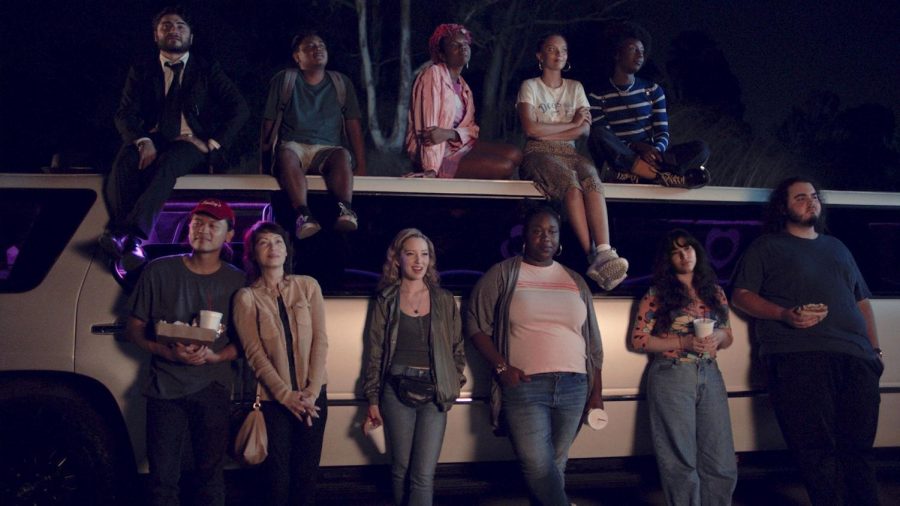 Part of the stellar cast of Carlos López Estrada's "Summertime."

“Summertime” brings in the heat with its upbeat scenes, lively slam poetry and striking shots of everyday life in the City of Angels.

This film, directed by Carlos López Estrada, is an unconventional story that feels like a love letter to Los Angeles as the camera follows 25 young people over the course of a single day with many conversations resulting in poetry or song.

Within this one day, the viewers meet a teenaged boy on a mission to find a hamburger while leaving bad Yelp reviews along the way. Two wannabe rappers sell their mixtape on the streets before reaching local fame. A girl glides down the boardwalk while strumming her guitar and then accidentally slams into a group of tourists, and another girl confronts homophobia on the public bus in an epic slam poetry moment. There are many more characters that viewers are introduced to, but describing them here would take too long.

What makes this movie even more meaningful are colorful side characters that don’t get as much screen time, such as a man pushing a cart, a girl playing the trumpet and an older lesbian couple kissing on the bus. These people brought life into LA and it’s important that the movie recognized them.

The camera almost seems to flow as we go from one character to the next enjoying a sunny LA day in July 2019. As one character’s storyline ends, another one begins. Yes, this storytelling was clunky and lost momentum at times, but it was heartwarming to see and hear everyone’s story with such confidence as they describe what “home” means to them.

There were many scenes that felt authentic. In a scene in a fast food restaurant, multiple customers harassed the poor cashier for help before the Yelp reviewer finally stumbled upon this restaurant and found his burger. Following this, many of the previous characters came together in the chaos and got to ride in a limousine together, confronting their thoughts.

However, despite some strong scenes, others felt too cheesy and theatrical. One scene, in the beginning, started with the Yelp reviewer arguing with the waitress over his $15 avocado toast, but this ended up with him choking. This scene definitely captured the true essence of LA with its overpriced vegan food, but the acting felt forced.

This film was developed over a summer workshop with all of these youth poets serving as co-writers and stars. It’s special that Estrada amplified the voices of these young people living in LA even though some stories weren’t as strong as others. Estrada is definitely a force in independent filmmaking and it’s exciting to see what he comes up with next.

Throughout this film, Gen Z invited viewers into their hopes, dreams and fears with bold slam poetry. The emotion is strong as we each learn about the battles this diverse group of people are facing and it’s clear this movie was made with a lot of love.

It’s also worth mentioning that this 90-minute movie brings viewers back to a time when it wasn’t the pandemic. When we could all crowd a restaurant or subway car, stroll city streets with ease and interact with our fellow neighbors.

This movie was the perfect watch in these still dark times. As reopening is in full swing, there is some hope that summer 2021 can be just like “Summertime.”