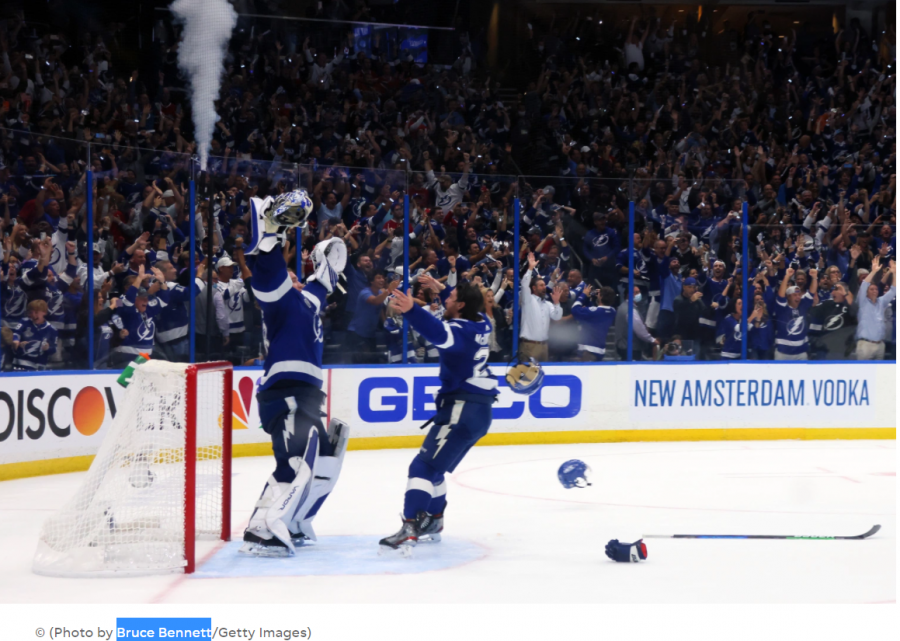 Winning back-to-back championships isn’t an easy achievement in the NHL. Only two teams have accomplished that feat in the past, the Red Wings of the 90’s and the Pittsburgh Penguins of 2016 and 2017. The Tampa Bay Lightning became the third member of this exclusive club Wednesday night.

The Lightning defeated the Canadians in five games to claim their second straight title.

In Game 5, the first period was a storm surge for Tampa as they outshot the Canadiens 12 to 4. Goaltender Carey Price was doing everything he could to keep the Canadiens in the game.

The score remained neutral even as the Canadiens battled back. Andrei Vasilevskiy stopped all the Canadian shots to keep the score at 0-0. With 6 minutes left to play in the second period, Tampa broke through.

Tampa Bay Lightning Defenseman Ryan McDonagh passed the puck to David Savard as he threw it on net toward Ross Colton, who tapped it in to give the Lightning a 1-0 lead.

That was Ross Colton’s fourth goal in the playoffs, adding to McDonagh’s eighth playoff assist and David Savard’s fifth.

The Lightning kept their foot on their gas as they beat the Canadians 1-0, outshooting them 30 to 22. It was their forecheck that helped them win back-to-back titles.

Pat Maroon has become the fourth player in NHL history to win back-to-back-to-back Stanley Cups championships. He won the cup in 2019 with St. Louis and now two with Tampa Bay.

“It’s amazing,” Stamkos said. “This group has been through so much together. To do this in front of our fans and our family. We didn’t get a chance to do that last year. And that was a huge motivation for this group to win it again. It doesn’t take anything away from last year, but to do it again. It’s just validation into history.”

While Tampa is known for its tourist attractions, beautiful cosways and its beaches along the coast, it was not known for winning championships until recently.

The Lightning went to the Stanley Cup finals in 2015 only to lose to the Chicago Blackhawks in six games. Besides the latest championship run of 2020, The last time the Lightning won the cup was in 2004 against the Calgary Flames in Game 7.

Recently, The Bucs won the superbowl against the Kansas City Chiefs in Tampa. Following that, the Tampa Bay Rays went to the World Series only to lose to the Dodgers in six games. And now the Lightning have won back to back Stanley Cup Championships.

“I think they dominated the whole way and getting Kucherov back for the playoffs helped a lot,” said Stefek. “I don’t think they will win next year especially with the possible departures of Coleman, Cirelli, and others. I don’t think they will be anything like Boston because they haven’t had the extensive time of success and winning of Boston sports.”

“Tampa’s win this year was very impressive. They showed they could play great defense,” said Suffolk men’s hockey head coach Chris Glionna. “Also, on offense Tampa’s puck protection and control of walls is something we could learn from.”

Tampa Bay teams have won three championships in the last three years. The only question that remains is this. Will Tampa become the next city of champions? Only time will tell.