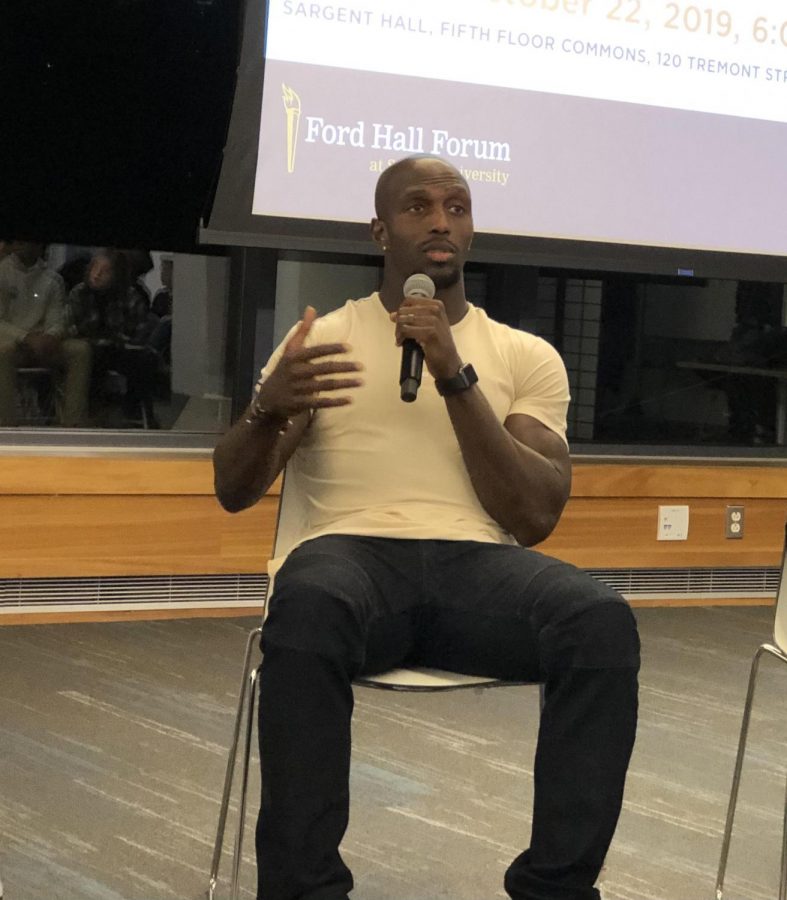 Devin McCourty at a Ford Hall Forum event in October 2019

Devin McCourty is not only one of the best players to put on a jersey for the New England Patriots since he was drafted in 2010, but also has been an amazing role model, leader and icon in the New England community. He shared what this journey was like to the Suffolk community at a Spring Week event Monday night.

Outside of McCourty’s three Super Bowl rings and two pro bowl selections, he is primarily known as a man who cares deeply about his community and loves to give back.

One of McCourty’s greatest honors is being nominated for the NFL’s Walter Payton Man of the Year Award four times during his career, an award that recognizes players from each team who succeed both on and off the field.

“I think for me, so much of my growth happened right there [in New England],” McCourty said at the event. “Good times, bad times, I felt like I really became part of the community and I just want to give the community what it has given me.”

McCourty, who is originally from New York, attended both high school and college in New Jersey. He said he has his mom to thank for his development as a man and becoming a leader.

“The ultimate mentor for me is my mom, ”said McCourty. “The biggest thing she taught me was sacrifice. I think for me, my older brother and twin brother Jason, we’ve always gotten the best part of life and it was strictly because of the sacrifices she made.”

Devin’s twin brother Jason is also an NFL player who joined the Patriots in 2018 after spending his first nine seasons with the Titans and Browns.

Devin recalls trying to convince Patriots coach Bill Belichick to sign his brother, who was expected to be released from the Browns in 2017. After numerous attempts to try and get his brother to come to New England, he gave up on his dream of playing alongside him in the NFL.

“I text Bill and I was like hey, just so you know Jason’s getting released and I think two McCourty’s would be better than one. He never responded and I was like welp, I guess not,” McCourty said. “And then in typical Bill fashion, not a big technology guy, he calls me about an hour later and was like we’re just going to trade for him.”

The two brothers have spent three years on the same team now and have savored every last second of it, especially since they didn’t think it would happen.

“We really just enjoyed every moment that we had together and then obviously ultimately being on the field when the confetti was falling…” he said. “I think that anyone with not only a twin but just any close sibling, to live out a life long dream together, whatever you think that would be, that’s what it was times a hundred. It was just an unbelievable feeling.”

McCourty also had some friendly banter for his former teammate Tom Brady, who will return to play against New England for the first time since he left the team last season

“It’s going to be an awesome atmosphere,” said McCourty. “Hopefully whenever we play him it will be a packed stadium with COVID and all of that so he can feel all the love and appreciation New England has from him, but obviously ultimately he goes home with a loss. That would be the true New England way.”

After last season’s abnormal struggles for New England, McCourty said he admires Patriots Quarterback Cam Newton and how he was able to come into a tough situation and become a leader in the locker room right away.

“He was the first guy in and the last guy to leave everyday, and for me that was awesome to see because like everyone else you just heard or knew what people wrote about him, what people spoke about him,” McCourty said. “But a competitor, a hard worker and a real good leader and I thought the team really benefited from him last year.”

When asked about his favorite Bill Belichick moment, McCourty recalled an event where Belichick came to visit him at Rutgers University before the 2010 NFL draft. McCourty was about to depart for a flight to Tennessee and hesitated to meet Belichick, but his agent convinced him otherwise.

“I remember sitting there for an hour and we were watching plays and he’d have his clicker and he’d be like, ‘What do you think you could do better?” McCourty said. “I remember after I called my agent and was like, ‘I don’t know how that went.’ He didn’t smile at all, he didn’t tell me good job.”

Ultimately Belichick did end up drafting McCourty and years later was told by someone that Belichick said that McCourty’s pre-draft interview was one of the best he had ever had with a player coming out of college.

In a message to the younger audience, McCourty had three simple pieces of advice: Find your path in life, choose your friends wisely and keep deciding on what success looks like.