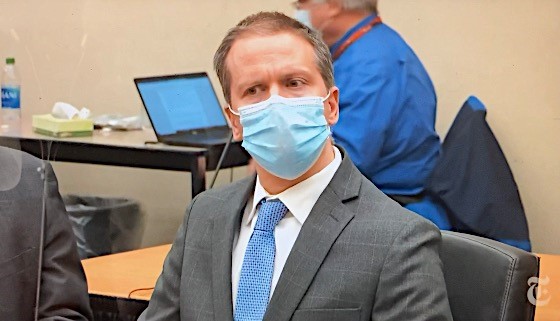 Former Minneapolis Police Officer Derek Chauvin was found guilty of three charges Tuesday regarding the killing of George Floyd, which sparked worldwide protests and a reexamination of policing and racism in the United States.

Prosecutors argued during the trial that Chauvin directly caused Floyd’s death last May due to Chauvin kneeling on Floyd’s neck and back for nearly 9 minutes, according to NPR.

“He did what he did on purpose, and it killed George Floyd,” prosecutor Steve Schleicher said during the trial.

After the three week trial, the jury went into deliberations Monday. The jury deliberated for about 10 hours over the course of Monday and Tuesday, reported NPR.

Chauvin’s bail was revoked after he was convicted. He will return to court for sentencing in two months.

People in Minneapolis and other major cities took to the streets with Black Lives Matter flags and signs, as they were relieved by the conviction.

Whitney Lewis, one of the people who took to the streets in Minneapolis told the Associated Press he felt the conviction was a step forward for justice.

Shortly after the verdict was announced, a heavy police presence could be seen throughout downtown Boston, and streets leading into Downtown Crossing were blocked off by metal barriers as a preparation for possible demonstrations.

None happened in Boston.

President Joe Biden spoke from the White House after the verdict was announced, where he called on Congress to quickly take action to address police reform, according to the Associated Press.

“‘I can’t breathe.’ Those were George Floyd’s last words,” Biden said. “We can’t let those words die with him. We have to keep hearing those words. We must not turn away. We can’t turn away.”

Vice President Kamala Harris said at the White House after the verdict was announced that racism was keeping the United States from upholding its founding promise of “liberty and justice for all.”

“It is not just a Black America problem or a people of color problem. It is a problem for every American,” Harris said. “It is holding our nation back from reaching our full potential.”

Suffolk University’s Center for Diversity and Inclusion issued a statement emphasizing that Chauvin’s verdict is only a small step toward police reform and greater change.

“We know that there is work to be done and that the work will not be completed until the system is rebuilt to center human rights. Celebrate our victory tonight, but we will continue the work tomorrow,” the statement read.

“The best way we can honor the memory of George Floyd is to work to dismantle the racism that cost him and so many others their lives,” Kelly said. “As a university, we must educate ourselves about changes we can make to ensure a more just society and then work to make those changes a reality.”