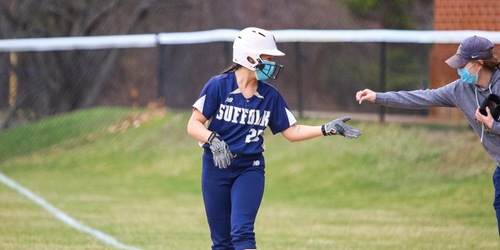 In the third week of the season, Zulla was named the Commonwealth Coast Conference (CCC) player of the week after helping bring the Rams to a 4-2 record that week with crucial wins against Endicott and Wentworth. Zulla totaled 13 hits along with three home runs. She also added seven RBI’s, seven runs and finished the week with a .920 slugging percentage.

After last year’s softball season came to an abrupt halt due to the COVID-19 pandemic, many athletes were left wondering when, or if, they would ever play again.

Suffolk softball star Ashley Zulla knew she couldn’t end her Suffolk softball career with a cancelled season, and made the decision to return for a fifth year. So far that decision has paid off as Zulla has been on a tear this season batting .427 with five home runs.

“As soon as I found out our season was ending I knew I would find a way to come back,” Zulla said. “I definitely felt like there was some unfinished business and it just didn’t feel right to leave on that kind of note. And I just wasn’t ready to identify as something other than an athlete.”

In the third week of the season, Zulla was named the Commonwealth Coast Conference (CCC) Player of the Week after helping bring the Rams to a 4-2 record that week with crucial wins against Endicott and Wentworth.

Zulla totaled 13 hits along with three home runs. She also added seven RBI’s, seven runs and finished the week with a .920 slugging percentage. This was Zulla’s second recognized award, as she was also named the Great Northeast Athletic Conference (GNAC) Rookie of the Week in 2017.

“I knew I was having a good week at the plate, but I didn’t realize it would put me in the running and ultimately earn me the winning spot,” she said. “This is also my first time being named Player of the Week so it’s pretty exciting.”

Navigating the pandemic isn’t the only obstacle Zulla and Suffolk have faced so far this season, as they have also had to adapt to playing in a new conference, since the school just joined the CCC after previously being in the GNAC.

“This season has been different in so many ways, one of those is playing in a new conference. This is my first time playing a lot of these teams so the returners all had to make adjustments when it comes to knowing the players strengths beforehand,” Zulla said.

Zulla has had to change some of the aspects of her game and how she approaches it due to other changes that have come about since last season.

“I’ve found that I have so much more confidence this year than I did any other year, and I think that really stems from experience,” Zulla said. “My approach is a little more laid back and focused, just because I feel the best things will happen when you let go of control and trust your training.”

As Zulla’s softball career winds down, she recognizes that her time on the field has been nothing but exceptional. But playing at Suffolk, she said, has been extra special.

“There have been times before the season that I doubted if this was the best decision for me to come back, but I knew there was a reason I was doing it,” she said. “What I did not know was that the reason would be the girls on this team. I’ve created relationships that will last a lifetime and I am forever grateful for that.”

The Rams currently sit at under .500 with a record of 9-15, but they still have time to get back on track.

Suffolk has eight games left on their schedule as they look to finish the season on a high note.  They will play two series against the University of New England and Roger Williams before finishing off their first season in their new conference.

“I’m trying to savor every last second I have left and just make the best of every day, every game and every at bat,” Zulla said.