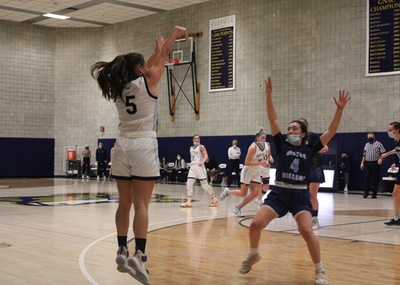 The Suffolk Women’s basketball team rounded out their shortened season with two wins against Gordon College last week, finishing with a record of 7-1.

Coming into their two-game season finale against the Fighting Scots, the Rams were on an impressive four-game win streak after picking up wins over Endicott and Curry.

In game one at the Bennett Center in Wenham, Suffolk continued their hot streak and jumped out to an early 6-0 lead. Senior guard Jenni-Rose DiCecco led the way for the Rams by contributing 7 first quarter points as Suffolk took a 17-7 lead heading into the second.

The second quarter was more of the same, as the first Suffolk bucket came off of a three pointer from junior Guard Sydney Richards. All of the Rams’reserves scored in this quarter, making way for the team to take a 35-18 lead into halftime.

Suffolk had to stop a couple of Gordon runs in the third. Junior Guard Allie Lopes added 5 third-quarter points without missing, but the Fighting Scots were not going away as they refused to let Suffolk build their lead in the third quarter. Gordon’s Abby Vampatella scored 9 of her 19 points in the third to keep Suffolk’s lead within striking distance.

In the fourth quarter, Suffolk’s defense held Gordon to only 5 points as senior guard Rachel LaSaracina recorded two steals. Suffolk added 14 more points and Lopes hit a last minute three pointer to close things out as the Rams took game one in Wenham 64-41.

The following day, the two teams met for one final game of the season, this time at Suffolk’s Smith Court.

Unlike in game one, the Rams came out of the gates slow as they couldn’t get any momentum going in the opening quarter. Gordon took full control early, jumping out to a quick 8-0 lead. Once again Gordon’s Abby Vampatella was their main source of offense with 7 points as they took a 16-9 lead at the end of the first.

Suffolk came streaming back in the second quarter since Junior Natalie Fraioli scored 7 of the Rams 19 points on 75% percent shooting. Following the strong offensive quarter, the Rams took a narrow 28-27 lead into the locker room.

Suffolk jumped out to a quick 12-0 run at the beginning of the third quarter to take a 40-27 lead, but Gordon kept fighting back. By the end of that quarter, the Fighting Scots cut into the Rams lead with a run of their own, making the score 45-42 going into the fourth.

Gordon briefly cut the lead to one early in the fourth, but then Suffolk went on a run to close the game out. In the final frame, senior Gabrielle DeComo scored 8 of her 18 points along with hitting a few huge three pointers to put the game out of reach and end her Suffolk basketball career with one final win.

After a very unprecedented season, the Rams showed their ability to fight back from adversity following a loss in their first game and never looked back, finishing the season on a 6 game winning streak.