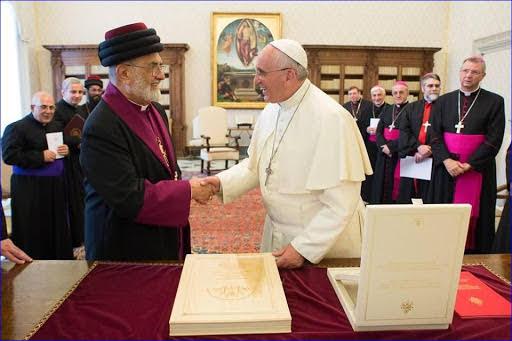 Pope Francis and Gewargis Sliwa II, the Patriarch of the Assyrian Church of the East

On March 5, Pope Francis became the first Pope in history to visit Iraq, a country that has long been plagued with ethnic and religious conflict, particularly towards the country’s Christian minority population.

According to the Wilson Center, although it has been three years, three months and one week since the Iraqi Prime Minister Haider al-Abadi declared victory over ISIS in December 2017, the country continues to suffer from political instability and violence.

One of the groups that were the most targeted by ISIS was Iraq’s minority Assyrian community, an ethnic group that has inhabited the region since ancient Mesopotamia and has remained Christian since Biblical times.

The Assyrians are indigenous to Northern Iraq, Eastern Syria and small parts of Turkey and Iran situated near the Euphrates and Tigris rivers. Their civilization is estimated to be over 4,000 years old, and once stretched from the Mediterranean Sea to the Persian Gulf. Assyrians are responsible for some of the most remarkable wonders of the old world, such as the Gates of Babylon and the ancient fortified cities of Nineveh and Nimrud.

The Assyrians are distantly related to the Maronites and Syriacs, Christians who inhabit Syria, Lebanon and small parts of Israel and the West Bank. They speak the Aramaic language, which was once the most commonly spoken language across the Middle East, and is said to be the language spoken by Jesus Christ.

According to the Assyrian International News Agency, there are now more Assyrians living in the diaspora around the world than in their traditional homelands. These mass migrations increased throughout the duration of the 20th century due to tragic events.

These included the Assyrian Genocide during World War I by the Ottoman Empire and allied Kurdish tribes, the Simele Massacre in Iraq in 1933, the Iranian Islamic Revolution of 1979, the Arab Nationalist Ba’athist policies in Iraq and Syria, the 2003 invasion of Iraq and subsequent war, the Syrian Civil War and the rise of ISIS in Syria and neighboring Iraq.

Since the majority of Assyrians in Iraq are Chaldean Catholic and Syriac Orthodox Christians, the arrival of Pope Francis to their homeland gives them a sign of hope, strength, and unity. The Pope met with Louis Raphaël I Sako and Mar Gewargis Sliwa II, two leaders of major Assyrian churches in Iraq, and was met with massive parades as he proceeded to make a public speech.

The crowd included not only Assyrians but Muslim Kurds and Arabs as well, who also consider Iraq to be a holy land as it was said to be the birthplace of the prophet Abraham.

“This blessed place [Iraq] brings us back to our origins. We seem to have returned home,” the Pope told a crowd in Iraq, as reported by the New York Times.

“Hostility, extremism and violence are not born of a religious heart; they are betrayals of religion,” the Pope continued. “We believers cannot be silent when terrorism abuses religion.”

The Pope also stressed that Iraq’s Christian citizens deserve to “live like all Iraqis in security and peace and with full constitutional rights” This resonated with many Assyrians who feel underrepresented by the Muslim-dominated government of Iraq, and as a result have been relentlessly protesting for greater representation and autonomy.

During his visit, the Pope prayed in the destroyed Syriac Catholic Church of al-Tahera in Mosul. He condemned the atrocities committed by ISIS against Iraq’s Christian population, which included “radical Islamist attempts to erase Assyrian Christians from existence,” according to  Newsweek. Under ISIS occupation, hundreds of churches and holy sites were destroyed, while Assyrians were being murdered and tortured for their faith.

While the Pope had previously taken a more aggressive stance in 2014 when he claimed the use of force against radical Islamists was justified, his prayer at the al-Tahera Church ended with the release of a dove into the air as a symbol of peace.

The majority of the Assyrian native lands were liberated from ISIS in July of 2017, when Assyrian militias such as the Nineveh Plains Protection Units and Syriac Military Council with the support of the Iraqi Armed Forces and Kurdish People’s Protection Units drove ISIS out of Iraq during the Battle of Mosul.

Those who remained in Iraq after the defeat of ISIS continue to protest the Arabization and Kurdification efforts of the federal and regional governments, which they claim undermine Assyrian history, culture, language and identity. The Pope’s visit not only raised awareness but also brought hope to the Assyrian community of Iraq.

Assyrians who live in the diaspora are also very involved in promoting their cause. Shamiran Mako, who is the assistant professor of international relations in the Pardee School of Global Studies at Boston University, talks about how relations between ethnic and religious groups in Iraq were not always bad, and that there is hope for future improvement.

“Growing up, we knew that we had the ethnic community that we belong to, but it wasn’t something that was heightened. Being Iraqi meant being Assyrian, being Kurd, being Turkmen, being Yazidi and so on,” Mako said. “Iraqis with various backgrounds got along, it was the government that was the biggest point of contention. It’s sad to see a country with such rich history go through what’s happening.”

However, despite all of the violence and chaos in the past decades, Mako, like many Assyrians, still remains hopeful. The Assyrian struggle for political representation and autonomy, historical recognition and justice, and potential self-determination and independence remains as strong as it has been for the last thousands of years.

“We have to be realistic,” Mako said. “But at the same time, you have to be hopeful that a better solution will come about in the future.”