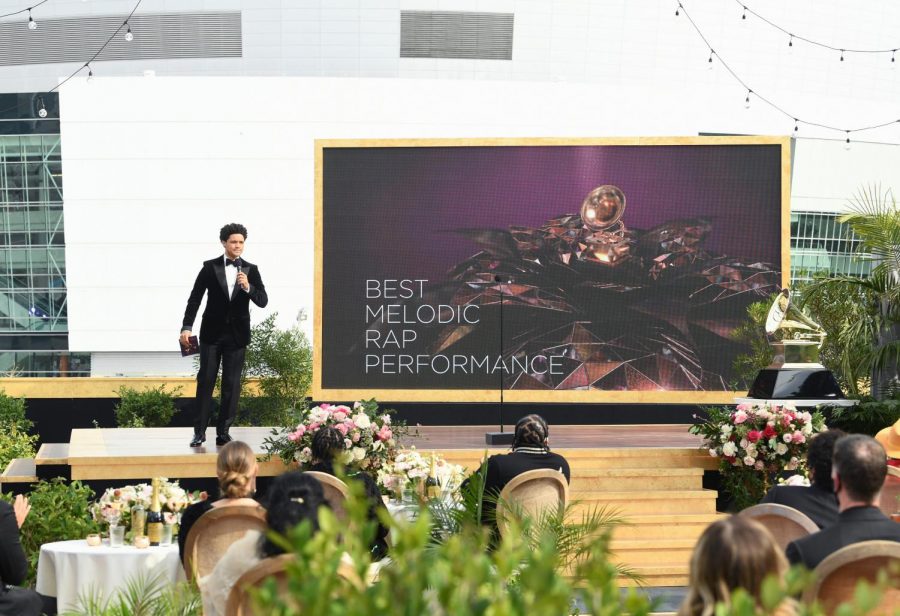 “The Daily Show” host Trevor Noah stepped away from hosting his nightly news recap to emcee “music’s biggest night,” opening the show with the thing he does best: comedy. Cracking jokes about politics, the Coronavirus pandemic and the royal family scandal, Noah warmed up the crowd quickly before handing the mic over to the group of stars who performed inside the neighboring Los Angeles Convention Center.

Harry Styles was the first performer of the night and sang a rendition of his song “Watermelon Sugar,” which won the award for Best Pop Solo Performance later in the night.

Billie Eilish and her brother FINNEAS performed their hit single “Everything I Wanted,” which took home the biggest award of the night: Record of the Year.

Beyoncé, who led the pack with nine nominations, made a surprise appearance to accept two awards: Best R&B Performance for “Black Parade” and Best Rap Song with Megan Thee Stallion for “Savage,” which was remixed to include a verse sung by Beyoncé. The artist thanked her husband of 13 years, rapper Jay-Z, and her three children, the oldest of which won her first Grammy earlier in the afternoon for the “Brown Skin Girl” music video.

With her second award of the night and her 28th Grammy win, Beyoncé broke the record as the most decorated woman in Grammy history, beating bluegrass singer Alison Krauss.

Megan Thee Stallion had a successful night as well, performing “Savage” and viral hit “WAP” with Cardi B. Megan took home three awards, and she is the first woman to win the award for Best Rap Song.

To follow COVID-19 guidelines, the award presentations were held outside of the convention center and performances took place inside. Under a tent, tables were set up six feet apart from one another to accommodate for social distancing, and capacity appeared limited to two per table. Single chairs were also set up, and stars donned masks as they watched the ceremony.

Dua Lipa, who took home the award for Best Pop Vocal Album with “Future Nostalgia,” put on a mash-up of “Levitating” and “Don’t Start Now” which featured an intense dance interlude and three costume changes. She stayed with her pink theme throughout the night and wore a beautiful Y2K-themed butterfly dress to walk the red carpet and accept her award.

The second half of the award show featured some of the most anticipated performers, which included Taylor Swift, Bruno Mars and Anderson .Paak as Silk Sonic, and K-Pop band BTS.

Swift, along with collaborators Aaron Dessner and Jack Antonoff, did a mash-up of “Cardigan” and “Betty” off of the Album of the Year recipient “Folklore,” and ended with “Willow,” the leading single of her most recent album, “Evermore.”

“Evermore,” which was released in December, was not eligible for this year’s ceremony but will be for the 2022 Grammy Awards.

In a tribute to music stars that have died in the past year, Silk Sonic, Lionel Richie, Brandi Carlile and Brittany Howard, accompanied on piano by Coldplay’s Chris Martin, lead the dedication.

The Recording Academy has since received backlash for neglecting to include former “Glee” star Naya Rivera in the televised tribute. Rivera was nominated for Grammy awards in 2011 and 2012 for her work on the show.

Throughout the show, to make up for the lack of “live” content that was limited due to COVID-19 protocols, pre-recorded interviews with the nominees were televised. This new aspect of the Grammys gave the audience an inside scoop on the making, recording and inspiration for the songs and albums nominated.

Later in the evening, Lil Baby delivered a powerful performance highlighting the current racial divide and the Black Lives Matter movement in America. Post Malone used an eerie stage design to perform the title track off his most recent album “Hollywood’s Bleeding” and Doja Cat danced alongside robot-dressed dancers to the Tik Tok-famous “Say So.”

The audience also heard from country performers Mickey Guyton, Miranda Lambert, and Maren Morris, who was joined by John Mayer for a special rendition of “The Bones.”

Roddy Rich ended the night with a performance of “Heartless” and “The Box.”

A full list of winners and nominees can be found here.