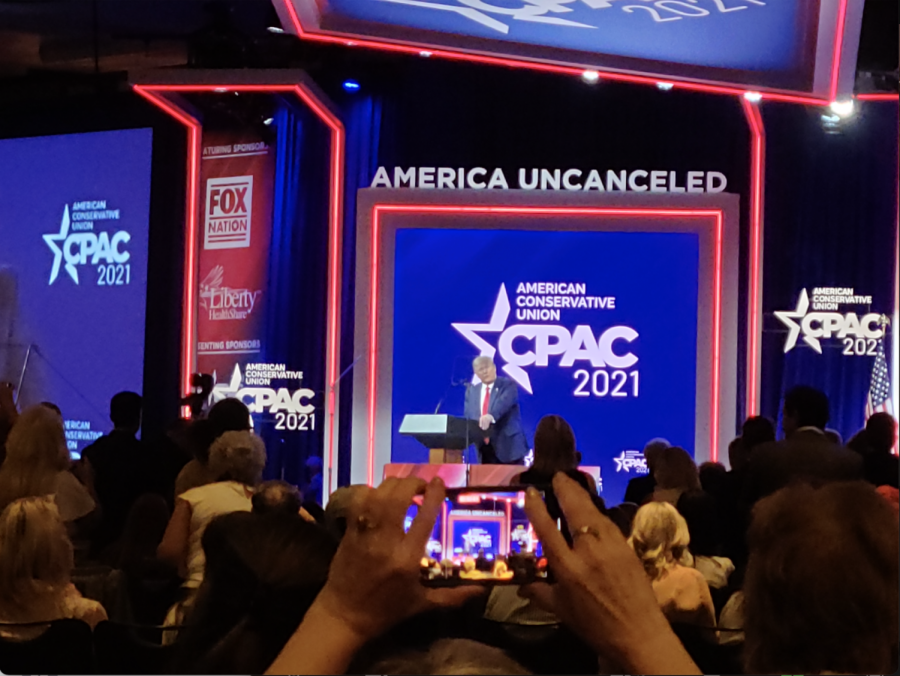 Former President Donald Trump attacked members of the Republican party in his first public appearance since leaving office, which he gave at the Conservative Political Action Conference (CPAC) Sunday in Orlando, Florida.

Suffolk alumnus Craig Anderson, who graduated in May of 2020, attended CPAC and spoke to the Suffolk Journal about his experience. Anderson said that he, as well as many other members of the Republican Party, felt that elected Republicans were not in touch with their base, which he thought tended to lean in favor of Trump instead of more moderate elected officials.

Anderson described the event as very pro-Trump, and that that he felt the grassroots populous of the Republican Party leaned in that direction, as well.

“It’s Trump’s party, it’s going in his direction. He’s the kingmaker for 2022,” Anderson said. “We’ll see more of him going forward now that he’s given his first speech since leaving office.”

In his speech, Trump went after members of the party who voted in favor of his impeachment in February, according to the New York Times.

Trump stated that going forward, he would be working to strengthen the Republican Party by  helping elect “stronger and tougher” Republican candidates.

“The RINOs [Republicans in name only] that we’re surrounded with will destroy the Republican Party and the American worker and will destroy our country itself,” he said.  “I’m announcing that I will be actively working to elect strong, tough and smart Republican leaders.”

Trump directly spoke about Representative Liz Cheney, the third ranking Republican in the House of Representatives, during his speech.

He referred to Cheney as “a warmonger,” and said that her “poll numbers have dropped faster than any human being I’ve ever seen.”

“I said, ‘I wonder if I’m doing the right thing [by helping McConnell].’ But you know what? I did what I did,” Trump said. “But [McConnell] went from one point down to 20 points up very quickly, immediately actually. And he won his race.”

According to the New York Times, Cheney and McConnell have both criticized Trump for his role in the Jan. 6 Capitol Insurrection, and have previously stated that the GOP should cut ties completely with the former president.

Trump also floated the idea of a future presidential run in 2024.

“Actually, as you know, they just lost the White House,” Trump said, reiterating false claims that Joe Biden stole the election. “But who knows. I might even decide to beat them for a third time.”

The Washington Post reported that Trump has made plans to start a super PAC that will be able to receive donations of unlimited size from both individuals and corporations. He is also considering publishing an “America First” bullet-pointed agenda that other Republicans could sign onto in a show of support.

According to the CPAC website, attendees were required to wear masks at all times, and maintain social distancing. They were also asked to fill out a health screening before arriving at the event which asked if they had been exposed to COVID-19 or experienced symptoms.

Anderson said the COVID-19 precautions felt a little bit excessive during the event.

“I personally felt [the COVID precautions] were too strict, as they did have overwhelming mask enforcement everywhere,” he said. “I was happy that, in contrast to Massachusetts, businesses are allowed to operate normally with good results. I would like to see that replicated across the country.”