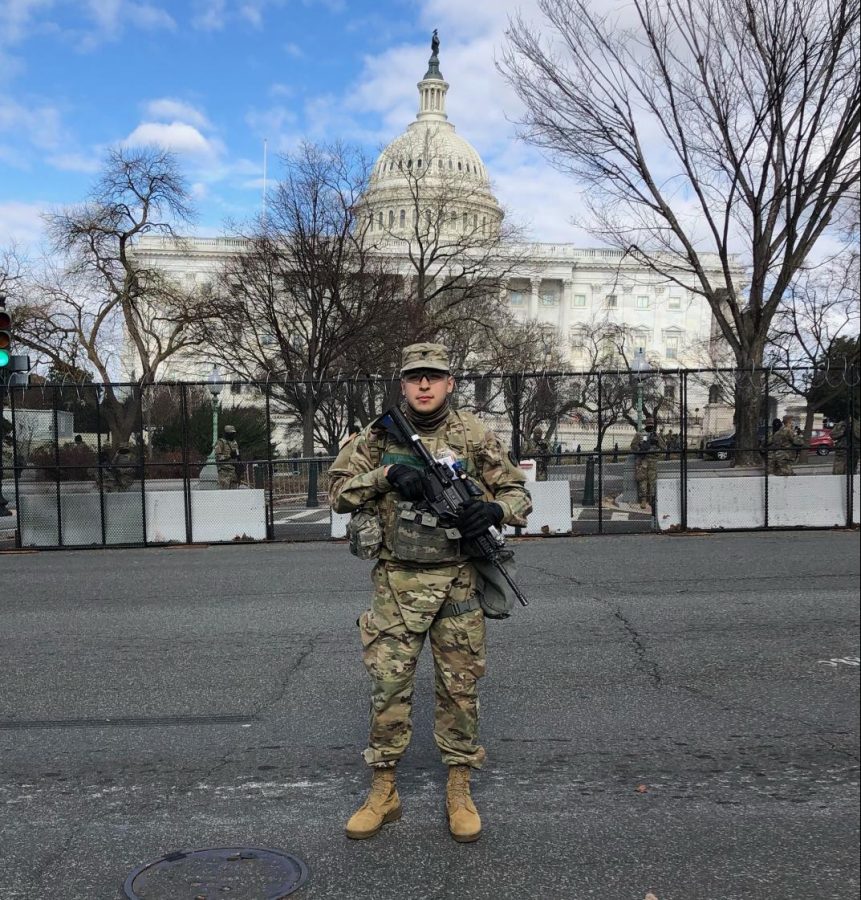 Instead of gearing up for the spring semester, Suffolk University student Kevin Luna-Torres spent his final days of winter break defending the Capitol during President Joe Biden’s inauguration.

Torres, a junior from Framingham, MA and political science major with an international relations concentration, was one of the thousands of National Guard members deployed to Washington D.C. on Jan. 15.

“It’s a moment in history, something that will be remembered forever,” Torres said. “But to be a part of that, and be a part of the right side of history, is important as well.”

The National Guard was activated and sent to D.C. amid security concerns for the inauguration following the Jan. 6 attack on the Capitol building, which saw far-right extremists break into the building and vandalize it. Politicians were evacuated and five people died.

Torres, who has been a guardsman for three years, took a bus to the capital with other National Guard members and was assigned 12-hour shifts. During these shifts, Torres stood to watch around the east side of the Capitol building and kept an eye out for suspicious activity. They were actively on watch for two hours and then got a two-hour break to get food or sleep before going back to being on watch.

In between shifts, Torres would nap in a nearby parking garage.

On the night of the inauguration, Torres and other guard members slept inside the Capitol. Torres stayed in the office of Congressman Dan Bishop, a Republican who represents the 9th congressional district of North Carolina, along with seven other guards.

“These were small offices,” Torres said. “It was interesting, especially with COVID around. We were all kind of skeptical of whether we were going to get COVID or not, but we got tested when we came back and luckily only a couple of people were positive.”

They were also sworn in as official special police for the Capitol Police Department, which Torres said was really special. He also said he felt a mix of many emotions while he was there.

“It’s important for me to represent Suffolk and my family as well, and to do things like this and make a difference. But at the same time, it’s disappointing to have to be there,” Torres said. “You never want to see your nation’s capital like that.”

Just before leaving to go to D.C., Torres was taking part in The Washington Center’s Inauguration 2021 Academic Seminar, virtually at Suffolk. He was able to have meaningful conversations with the others in D.C. about topics he had been learning about in the seminars, which he really enjoyed.

Outside of being a part of the ROTC and a member of the National Guard, Torres is heavily involved at Suffolk. He is a member of the Arab Student Association and Program Council, a Center for Community Engagement project leader, is a ram supporter, an orientation leader and a three-sport athlete. Torres runs cross country along with the indoor and outdoor track for the Rams.

Torres hopes to become an officer in the Army once he graduates from Suffolk and completes the ROTC program.

“Service is at the center of my heart and my life,” he said.