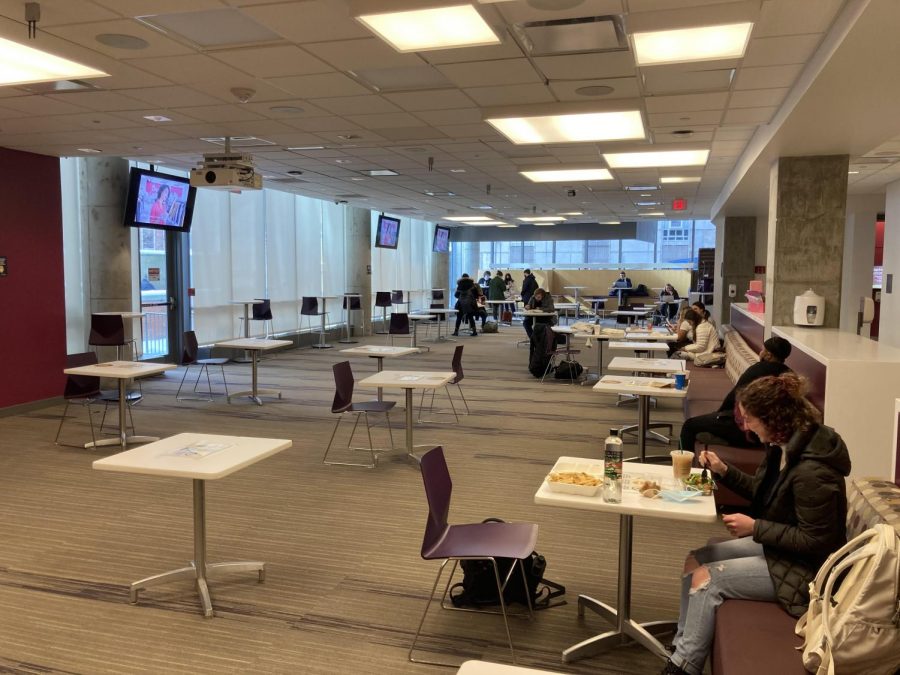 Students eat in the Samia Café.

Sodexo’s contract with Suffolk University will come to an end later this year. But, what does this mean for Suffolk students who eat on campus?

Student Government Association (SGA) President Karine Kanj explained that Suffolk’s contract with Sodexo was actually up last July, but was extended for one year due to uncertainties regarding COVID-19. Kanj said that the university is looking into other dining options, but nothing is definite.

Kanj said that a committee was formed last year that included representatives from Suffolk’s faculty, law school and both graduate and undergraduate students to hear concerns and look into other dining options when Sodexo’s contract expires.

At the beginning of February, this committee has begun looking into dining again.

“I was contacted by the chair [of the committee] letting me know that [the university] has two consultants coming in to help the university decide which vendor would best suit Suffolk and the student’s needs,” Kanj said.

According to Kanj, SGA created a form last year for students to express concerns about dining on campus. She said she plans on using this information to ensure student’s concerns are heard in the final dining decision.

While the committee is looking at new dining vendors, Kanj explained that the committee will ultimately choose the vendor that will best serve the students. This could mean renewing the contract with Sodexo.

“Know that if Sodexo is rehired, it’s for a reason,” Kanj said. “That reason could be that their food quality could be better than the other vendors in [the university’s dining] budget.”

Sodexo General Manager Bob Cirame said over email that Sodexo is always seeking to improve the dining experience for students.

“I look forward to responding and addressing any concerns about dining,” Cirame said. “To us, feedback is necessary. It tells us know how we are doing [sic]. Are students happy? If not, what can we do to innovate, adjust and implement change?

Students have expressed concerns about campus dining for a number of reasons. Freshman Grace Kelly said that she feels that there is a lack of variety when it comes to options of where and what to eat.

“I’m a freshman, so I don’t really know what a normal dining situation is like, but in general I think it’s just very minimalistic,” Kelly said. “I get that they can’t necessarily have the full real dining halls open [1due to COVID-19], but I think it’s the fact that depending on what building you live in limits which places you can even go to.”

Other students believe that Sodexo does not cater well to dietary restrictions.