Winter storm warning in place for nor’easter this weekend 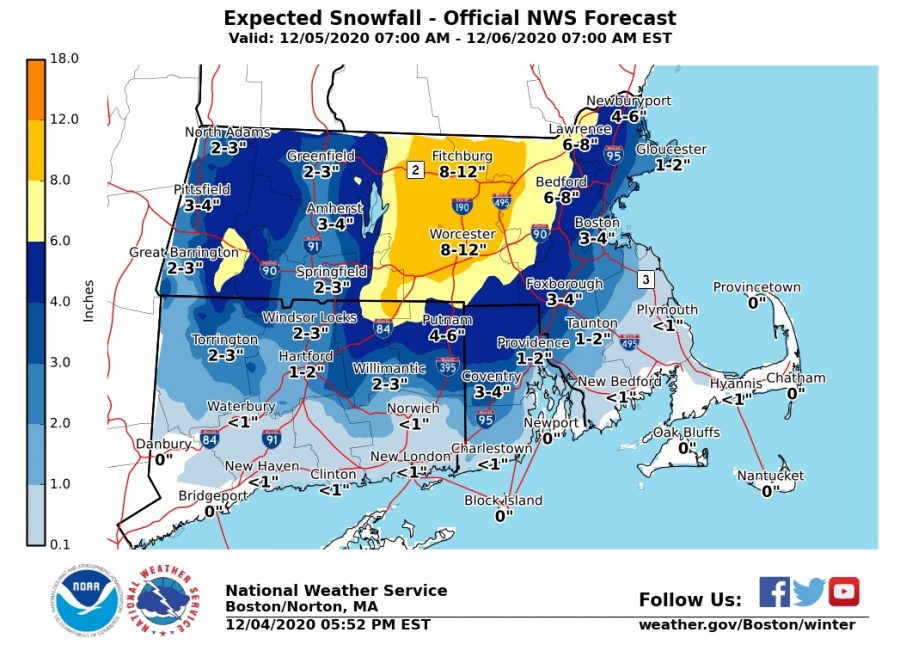 Boston residents, and those living in surrounding areas should gear up for a nor’easter that is expected to slam many parts of New England early Saturday morning through Sunday.

A Winter Storm Watch has been issued by the National Weather Service in many parts of Massachusetts, including Boston. The city is currently expecting three to four inches of heavy, wet snowfall. Combined with strong wind gusts of up to 50 mph on the coast, residents should plan extra time to commute as roads and rails will be slick.

Downed trees and powerlines are also likely due to the combination of high winds and heavy precipitation. Power outages can be expected throughout Boston and all of Massachusetts.

For Boston, the storm will begin with heavy rainfall Saturday morning and is expected to switch to snow throughout the night and into early Sunday morning.

Places further from the coast have been issued a Winter Storm Warning and can expect much more snow with a slightly different timeline. Worcester county is expecting rain to switch to snow around noon, with eight to 12 inches of snowfall, greatly increasing the risk of power outages in the area.

Winter Storm Watches indicate a risk for a winter storm event and are typically given 24 – 48 hours before a storm when there is at least a 50% chance for hazardous weather. Winter Storm Warnings are initiated when six inches of snow are expected to fall within a  12-hour period, or eight inches will fall within 24 hours.

Boston residents should also be aware of the possibility of flash flooding, especially around noon on Saturday when the heaviest rainfall is expected.

Where the rain/snow line will end up cannot be perfectly forecasted and some deviation is not abnormal, according to the National Weather Service, so snowfall amounts may vary especially along the coast. Depending on the track of the storm, Boston may see only mixed precipitation.

For more weather updates and tips on how to stay safe during hazardous winter weather, you can find the National Weather Service’s website at www.weather.gov/boston or follow them on Twitter @NWSBoston.