Can Trump take electoral votes away from Biden, despite losing in ‘winner take all’ states?

Here's what the Suffolk community has to say 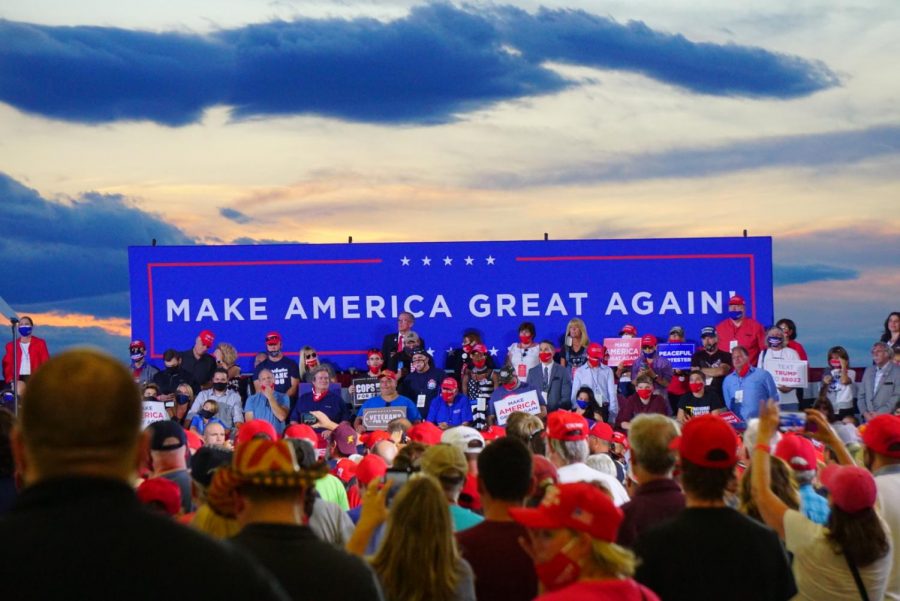 Trump supporters sit on risers at a Trump rally in Londonderry, N.H., in summer 2020.

President-elect Joe Biden has been declared the winner of the presidential race, but President Donald Trump has yet to officially acknowledge his loss, claiming that states can hand their electoral votes to him instead of Biden.

“Every state, except Maine and Nebraska, specify in its laws that the winner of the statewide popular vote is entitled to the state’s presidential electors,” said Cobb. “State legislatures have the power to set ‘the manner’ by which electors are chosen, the Constitution also gives Congress the power to decide the day on which electors are to be appointed.”

Maine and Nebraska apportion some electors by congressional district.

“What Trump is talking about is called faithless electors, and it is when a state gives away electoral votes against how the popular vote went,” said Marley Belanger, a student at Suffolk University studying government with a concentration of international relations.

Cobb explained that on Dec. 14, the Electoral College will meet and send their votes to Congress. On Jan. 6, Congress will have a special joint session to “officially declare President-elect Biden the winner.”

“Biden needs 50 votes in the Senate to officially declare him the winner,” Cobb said. “The two Georgia Senate seats will be empty, so Biden needs 50, not 51.”

Trump continues to cast doubt on the outcome of the election

“Hopefully the Courts and/or Legislatures will have the COURAGE to do what has to be done to maintain the integrity of our Elections, and the United States of America itself,” he tweeted on Nov. 21.

Trump’s tweet had no factual evidence to support his claim because there has been no findings of widespread fraudulent voting, despite multiple failed attempts by his legal team to challenge the validity of ballots in multiple states throughout the country.

Eleanor Roth, a Suffolk University student studying legal studies and government with a concentration in international relations, is frustrated by Trump’s actions.

“This is just mindless followers who are not educating themselves and are holding on to the very last possibility of Trump winning.  It is a disgusting effort to hand Trump the win despite a democratically fair election,” said Roth.

On Nov. 23, the General Services Administration announced that a formal transition will begin.

Even with Trump’s pushback in key states, Michigan certified their election results on Nov. 23. The next day, Nov. 24, Pennsylvania’s secretary of state certified Biden as the winner with more than an 80,000 vote lead across the state.