Game Review: “Tell Me Why” raises the bar with first transgender protagonist 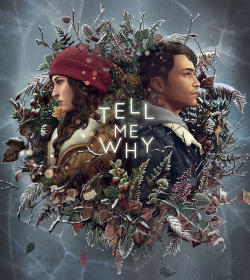 “Tell Me Why” is a narrative adventure game that packs an emotional punch and keeps you on your toes until the very end. The award-winning game also made history with its first lead transgender character in a major video game.

From the creators of the “Life is Strange” series, Dontnod Entertainment does not disappoint, bringing players a brand new game that is just as gripping and intimate as their previous releases.

“Tell Me Why” follows the stories of two twins, Tyler and Alyson Ronan, who reunite after being apart for 10 years while leading very different lives. Set in a fictional Alaskan town, the twins unravel the memories of their younger years while cleaning out their childhood home to be sold.

This game really makes you connect with the two main characters, both in different ways.

Tyler is our trans lead who is voiced by a trans man. It’s not only amazing and important to see a trans lead from fairly mainstream game developers, but what really stands out is that Tyler isn’t simply made to be “trans” in the sense that this is his only personality trait.

The game developers worked hard to make sure the character wasn’t reduced to the simple tropes LGBTQ+ characters usually are in the industry. Players can hear him talk about his struggles and see Tyler grapple with very real issues that trans folks face, and it’s nice to see it so deeply rooted in the plot instead of being shoved aside.

With our other lead character, Alyson, players can see a very accurate depiction of mental illness. We see how she struggles with anxiety, especially further along in the game. It feels very real and relatable which makes the characters resonate with players even more.

There are also some very lovable side characters in this game, as players are introduced to Michael, Alyson’s best friend who is a proud member of the LGBTQ+ community and serves as an adorable love interest to Tyler.

One complaint players may have with the gameplay is sometimes it can get a bit slow and boring, but I found that usually not too long after I began to feel bored, the narrative would shift and that would re-engage me. The game does a really great job with plot twists, since players really never know what’s going to happen next or what secrets the twins might uncover about their mother and the town they thought they knew. Though the game may feel like it has one too many cutscenes, it involves puzzles and gives many choices to the players that can affect the way your story unfolds, and make it matter. With multiple different endings, this is something that keeps players engaged.

As a player who pays a lot of attention to graphics, the details of this game caught my eye. “Tell Me Why” is so beautifully made with clean graphics, and the atmospheric soundtrack combined with the location and background set against this stunning Alaskan landscape makes you wish you were there. It really engulfs you, and one of my favorite parts of the game was watching amazing cutscenes that transport you into the world of the Ronan twins.

The best part about this game was the emotional story the developers worked hard to create. Personally, it brought me to tears as a player at least once. Seeing the brother and sisterly love and acceptance of each other in this game kind of wraps you up in a warm hug. It makes you want to go home and hug your own sibling.

“Tell Me Why” is undoubtedly recognizable as a Dontnod game. The developers did it again with their impeccable soundtrack and cinematic storyline, which is also tied back a bit into previous games from the developers, since the twins have their supernatural powers, as well as being told in an episodic format over three chapters.

With “Tell Me Why,” players will be in for lots of smiles and tears that give you that warm and fuzzy feeling. But the game also has those dark twists and turns that leave the end of each chapter wanting to run to the next.

Available for Xbox and PC, “Tell Me Why” is out now.