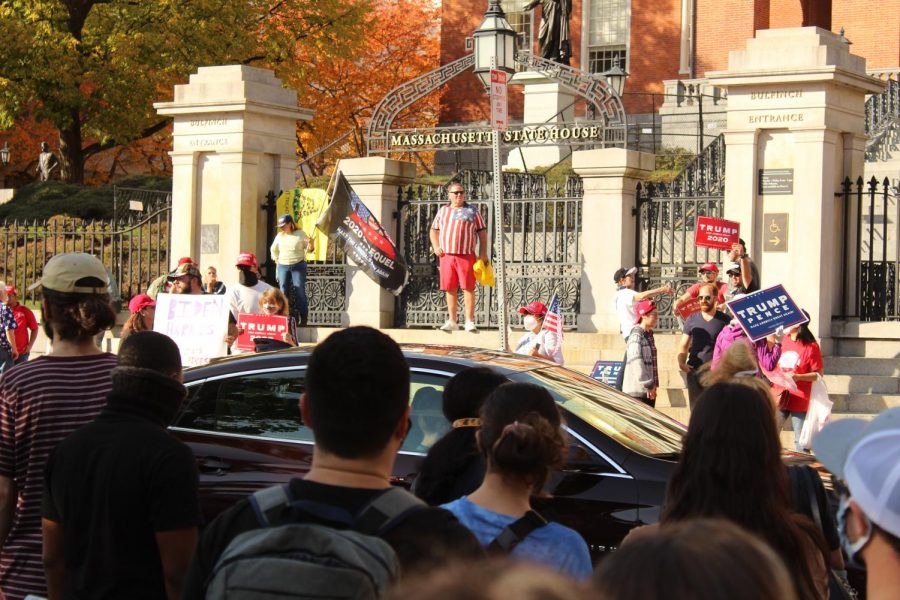 Pro-Trump protesters outside of the Massachusetts Statehouse. Photo via Will Woodring

In the weeks leading up to the 2020 election, polling facilities were receiving millions of mail-in ballots and early voting ballots in record numbers.

A notable number of people falsely believed there was ballot fraud and inaccurate counts as a result of the doubts President Donald Trump and other members of his administration shed on the integrity of these voting methods. The influx of mail-in and absentee ballots also meant that it would take poll workers much longer to count the ballots.

In the early morning of Nov. 4, less than 24 hours after the polls had closed, Trump declared himself as the winner and announced that he would challenge any states that he did not lead in. This statement made by the president led to many of his followers going and protesting in front of numerous polling facilities, specifically in major swing states.

The protesters were outside these places claiming that votes had been “stolen” from Trump and were asking for a recount. The main phrase that came out of these protests from the right side was “Stop the steal.”  Other pro-Trump protesters in Michigan were telling stories about how the votes were counted inaccurately.

However, these protesters made these claims without having any credible proof of voter fraud to back them up. Since Election Day, federal judges have thrown out nearly 20 cases from Trump’s legal team that challenge the results of the election or try to imply voter fraud in key states.

As the poll workers were still inside the facilities counting the votes in states like Arizona, Michigan and Pennsylvania, the protests outside became larger. In some states, armed pro-Trump militia groups joined the protests. They carried weapons like shotguns, handguns and military-style semi automatic rifles as  workers were still inside the facilities doing their job.

In Phoenix, one of the last cities in the country to finalize their vote count and the center of the election protests in the state, poll workers had to be escorted to their cars due to safety precautions. In other states where Biden was leading, election officials stated that they feared for their safety.

Travis Fillmore, who showed up to a protest in Phoenix armed with a rifle, told AP News that “We just want them to know we won’t let them get away with anything. We want to make sure all the legal ballots are counted, and fairly.”

He made this statement while the poll workers were still inside counting the votes. However, once the lead was made clear, the protests in Phoenix flipped.

In the early morning of Nov. 7, when Biden was projected to be the overall winner, protesters who were pro-Trump began to claim that the news media, including Fox News, were lying about the results. Outside many state capitals, there were pro-Trump protesters who even chanted “Fox News sucks” at certain points throughout the day.

Many protesters who went out on Nov. 7 stated that they would only believe that Trump was defeated, and that Biden won, if a Republican official made this statement.

They firmly believed that the media was lying to the public about the results, and until someone they believed appeared trustworthy to their political party announced loss for Trump, they would continue to fight for his presidency to continue for four more years.

Some of the protesters said they thought that the only way to solve the problem of the disputed election outcome is with a nationwide recount, and some went as far to say that the nation should have a completely new vote.

Despite how either political side felt about the outcome of the election, the governor of Oregon, Kate Brown said that the people must trust the integrity of the results.

“It’s important to trust the process and the system that has ensured free and fair elections in this country through the decades, even in times of great crisis,” she said in a statement. “We are all in this together.”