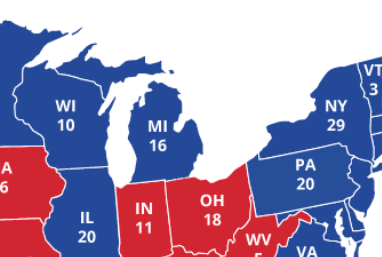 Wisconsin, Michigan and Pennsylvania, aka the "blue wall"

It was just over a week ago that former Vice President Joe Biden was named the president-elect of the United States over incumbent President Donald Trump following a historic presidential election.

Biden was able to use record voter turnout numbers to his advantage, increasing the number of Democratic votes from 2016 and flipping key states to secure the win.

This year’s election saw voter turnout in record numbers, as Biden and Trump each received more votes than any other presidential candidate in American history. Although Biden won the popular vote by about 5 million votes, that doesn’t mean much for his path to victory considering that Hilary Clinton won the popular vote in 2016 and didn’t win the presidency, since she didn’t win in the Electoral College.

The key to Biden’s victory laid in the fact that he was able to rebuild the “blue wall,” a collection of states that typically swing Democratic. Back in 2016, Trump was able to swing three of those key states — Wisconsin, Michigan and Pennsylvania — in his favor, and it ended up being the difference in the election. This time around, Biden was able to flip them back to the Democrats, leading to a victory of his own.

Like Clinton in 2016, Biden won over the majority of Black voters. According to exit polls published by NBC News, Biden won over 89% of Black voters in Michigan, and 92% in both Wisconsin and Pennsylvania. Although the rates are similar to that of 2016, the dramatic increase in voters amplified the margin for Biden.

Urban areas once again voted strongly Democratic, and in some cases, Biden did even better than Clinton did in 2016. In fact, Biden did about 10 points better in Michigan and Wisconsin than Clinton did. While Trump still controlled the votes in suburban and rural areas, Biden was able to close the gaps for Democrats in those places from four years ago, which played a major factor in taking back the “blue wall” states.

For insurance, Biden was able to swing a couple of Republican states his way as well. For the first time since Bill Clinton was reelected in 1996, a Democrat won Arizona, and although it is in the middle of a recount, it appears that Georgia had gone Democratic for the first time since electing Clinton to his first term in 1992. Many of the same factors in Biden’s “blue wall” state wins were the same factors that allowed him to flip Arizona and Georgia, as well.

President Trump still refuses to concede the election, but Biden’s 306 electoral votes is said to be too big of a task for Trump to overturn, largely in part of those battleground states.