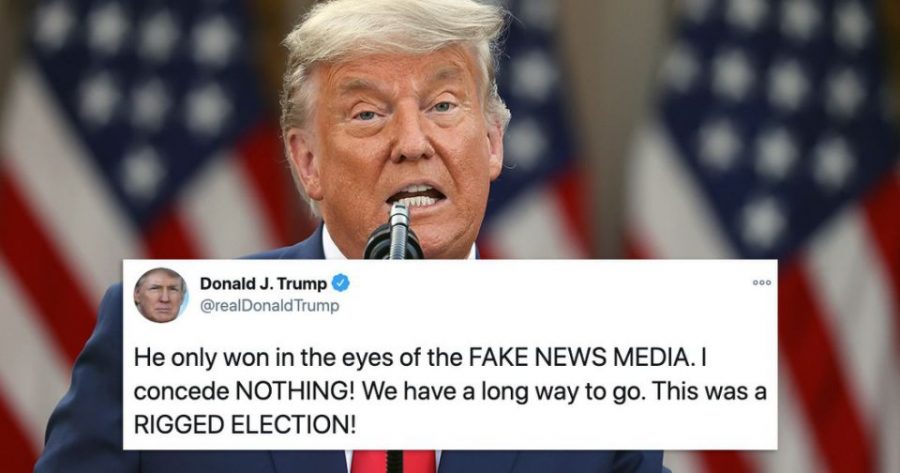 With 290 electoral votes and all but three states reporting results, former Vice President Joe Biden has undoubtedly won the election. Yet, President Donald Trump will still not concede the election, instead repeatedly tweeting  that the election was “rigged.”

Although the Trump campaign has filed lawsuits challenging election rules regarding mail-in voting and poll watchers in multiple states, these are unlikely to change any results. Politico reported that Trump’s legal team has won a singular case and lost at least a dozen — and the one victory is not enough.

Trump— for the sake of the country, it’s time to give up.

Trump’s failure to admit defeat makes it incredibly hard for the Biden transition team to plan for his presidency. As the Washington Post reported, it is the job of the General Services Administration (GSA) to sign paperwork that gives incoming presidents access to federal officials, documents and millions of dollars to begin the process of transitioning.

However, GSA administrator Emily Murphy, who was appointed to the position by President Trump, has not done this.

“An ascertainment has not yet been made,” Pamela Pennington, a spokeswoman for GSA, said in an email to the Washington Post. “And its administrator will continue to abide by, and fulfill, all requirements under the law.”

On Jan. 20, Biden will be sworn in as President of the United States whether Trump likes it or not. So when will the GSA officially begin the transition process? When the electoral college formerly votes on Dec. 14? When the Trump campaign gives up on its numerous, yet baseless, lawsuits challenging election results?

The longer Trump waits to concede the election, the longer Biden’s team will have to go without the important materials and access to federal agencies they need. This could be dangerous to the nation as a whole as Biden’s administration could potentially have much less time to prepare for the difficulty of governing during a pandemic.

Biden will be entering office during a time of crisis. Starting from his first day, Biden will have to coordinate the fight against COVID-19, which is no easy task. While he has already published a response plan, it can take time to coordinate across different federal agencies and the private sector.

According to Politico, the transition delay has already interfered with Biden’s plan and this will continue until the transition is officially authorized. This is unfair to the nation, as the longer the U.S. goes without a coherent strategy in place to beat COVID-19, the more people will contract the virus.

When it comes down to it, the reason Trump hasn’t conceded is selfishness. He refuses to admit he’s lost because of his ego. As the Washington Post reported, when faced with failure, Trump walks away, claims victory and argues that “the system” is set up against him. But this isn’t a reality show or failed business. This is the presidency of the United States, and Trump’s decisions have real consequences for real people.

Trump supporters often refer to him as a “patriot” and claim that he will save the nation. It’s time for him to finally make the patriotic decision and allow the transition process to begin for the sake of the United States.