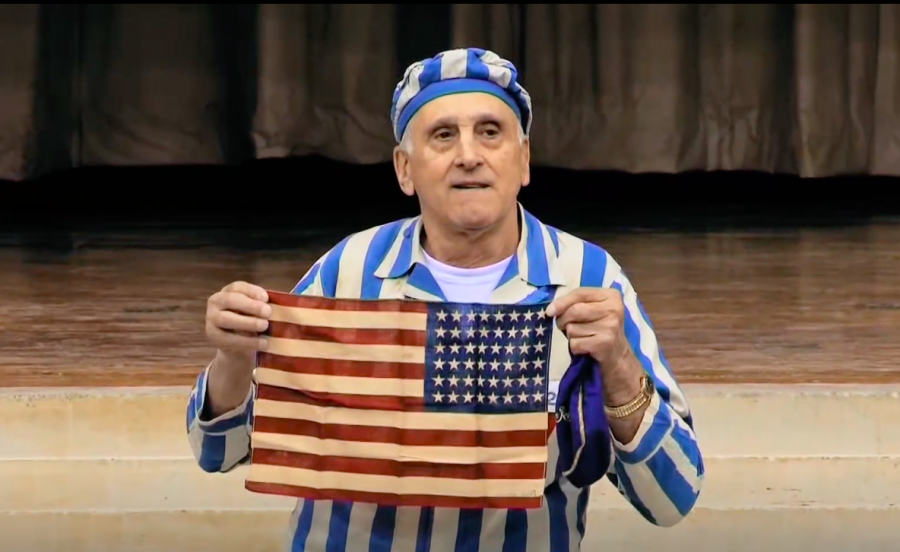 Courtesy to "Etched in Glass"

Steve Ross proudly displaying the flag that was given to him by an American soldier after he was liberated from Dachau.

“Etched in Glass: The Legacy of Steve Ross” is all about sharing kindness and compassion in a time of darkness.

This powerful documentary, directed by Roger Lyons, chronicles the story of Steve Ross, a Boston Holocaust survivor who was given a small American flag by an American soldier while being freed from the Dachau concentration camp at the end of World War II. This small flag was a symbol of hope to Ross, and once he was liberated at 14-years-old, he embarked on a 67-year mission to reunite with this soldier.

The hour-long documentary, which was broadcasted on GBH-TV on Nov. 12, solemnly wove together photos and videos from the Holocaust and Ross’s childhood into adulthood. Compelling videos also showed an older Ross speaking about his experience to students across Boston and at other events while showing that very flag and the tattooed number on his arm.

Ross recalled that he was nine-years-old when Germany invaded his home country of Poland, changing his life forever.

“We were subordinated, it was so hard to live in that world,” said Ross in the documentary.

From here he was sent to 10 different concentration camps, where he faced death every day. He detailed one time when he received 25 lashes with a pipe for stealing a potato and another time when he hid in a pile of human waste to avoid being marched to death with other children.

“We began to realize that we are no longer human beings, we just were some zombies,” said Ross.

In 1945, after the more than 30,000 inmates of Dachau, including the emaciated Ross, were liberated by American soldiers,Ross immigrated to Boston as an orphan.

Ross, who died in February 2020, had a profound life. He was drafted to serve in the Korean War and became a psychologist who worked with troubled youth around Boston. Once an orphan who had made it his mission to learn how to read and write following liberation, he went on to receive degrees from Goddard College, Boston University and Northeastern University.

Throughout “Etched in Glass,” Ross wanted to emulate how that heroic American soldier handing him a flag was a cathartic moment that rekindled his spirit to live as he worked to have great success as an adult.

“After I was rescued from hell in the valley of death, I came upon a soldier on a tank that showed me compassion for the first time, concerned, and took me back to God, to civilization and mankind,” said an emotional Ross in a speech included in the film.

Ross also became a prominent figure at swearing-in ceremonies for new U.S. citizens in Boston. During these ceremonies, he proudly displayed that flag and found power in retelling his inspirational story.

“America said I’m human; I have an identity as a human being and I am an American. And before I was not human…I was a lost soul in the world,” Ross said in the documentary.

Ross was a very dedicated man who inspired everyone he met. This was clearly seen in the film’s moving interviews with the now grown men Ross helped in their childhood and footage of Ross urging students in Boston school to stand up against racism and bigotry.

In 1995, Ross founded the mesmerizing New England Holocaust Memorial, a beacon of memory and hope. The memorial, located just steps away from Faneuil Hall, features six beautiful towering glass structures that are etched with the numbers that were tattooed on the arms of the millions of Jews killed during the Holocaust.

The movie ends on a positive and heartwarming note in 2012, when Ross finally meets the family of Lt. Steve Sattler, the American soldier who gave him that flag and inspired him more than half a century before.

Sattler died in the 1980s, but the journey of Ross and his family uniting was a long and lucky one. In 1989, an episode of “Unsolved Mysteries” detailed Ross’s quest to find the soldier that saved him. Luckily, Sattler’s daughter was watching this episode and knew this episode was the exact story that her dad told her before he died.

Ross meeting the soldier’s family for the first time was one of the most touching moments in the remarkable film and showed that Ross’s lifelong devotion to finding the soldier was worthwhile in the end.

The documentary profoundly displays the harrowing story of Ross’s time in the Holocaust, but also, the powerful life he led after it. And just as he drew strength from the flag Sattler gave him upon his liberation, Ross and his story will inspire generations to come.

Future viewings of “Etched in Glass” can be found on GBH-TV’s schedule. Additionally, on Dec. 22 at 10 p.m., Connecticut Public Television will air the documentary.