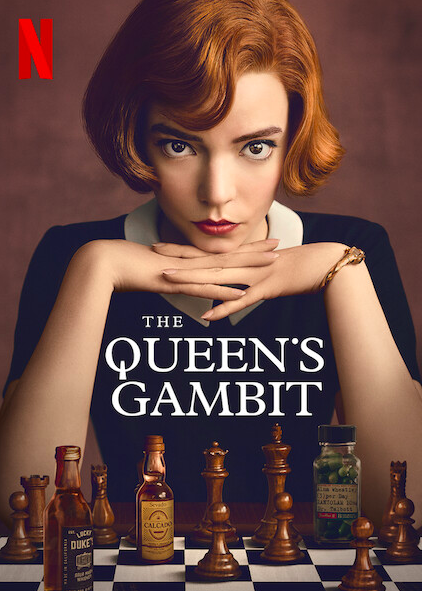 In a game notorious for thinking ahead and well planned moves, “The Queen’s Gambit” takes the audience on a shocking, emotional journey from start to finish through the eyes of a young chess player.

“The Queen’s Gambit,” which is based on the novel by Walter Tevis, takes the viewer into the mind of chess player Elizabeth Harmon, showing the ingenious, seductive game that takes years to learn and decades to master.

The series follows Beth’s life as if it were a chess game, showing her openings, her plays and her endgames, all while teaching the audience what an intricate, awe-inspiring game chess is.

Beth, played by Anya Taylor-Joy, gets orphaned at the age of nine and is sent to the local Christian orphanage. There, she lives, goes to school and struggles her way through life without her mother. One day, she comes across the janitor playing chess in the basement. From there on, she sneaks down and begs him to teach her. It takes lots of convincing from Beth until the man agrees.

Beth is a gifted chess player. She is able to memorize plays after watching them once, and she visualizes the chessboard on the ceiling of her bedroom. She quickly outshines her mentor and starts to play larger games.

When Beth gets adopted by a distracted, but kind woman, she begins to play in tournaments, winning big sums against grown men when she was just a teenager. She gains the respect of the chess community as she wins game after game, working her way through the best players and building a strong reputation for herself.

As she gets older, she starts to form alliances with the surrounding players, falling in love, breaking hearts and getting hers broken. She learns the importance of having support for the teamless game and learns to accept help even when she thinks she doesn’t need it.

Set during the 1950s, “The Queen’s Gambit” highlights the fashion, social norms and home decor of the time period. Having lived in the orphanage for years, Beth didn’t have the luxury of wearing popular clothing or living in a room with a lace four-poster bed with patterned wallpaper.

When she is able to experience the novelty of fashion, the audience can’t help but be excited along with her.

The norms for drugs and alcohol are shockingly different from what they are today, and the seven-episode series shows the consequences of the lack of knowledge and regulation on addictive substances.

Beth struggles with addiction from a young age. The accessibility of drugs and alcohol was much different in the 50s than they are today, and it was not yet known how harmful such substances could be on people’s minds and bodies.

The social constructs around a woman’s role are a huge part of Beth’s journey. As one of the only female competitive chess players able to make her way up to the big leagues, Beth experiences lots of judgment solely based on her gender.

The series takes an interesting twist on this side of history, by saying “so what?” Many of the articles and news stories published about Beth highlight her gender, and the courage and perseverance she needed to play in a man’s world.

The young protagonist points out that her gender does not affect her ability to play, and should not be a part of the conversation. This mindset gains Beth the support and encouragement of people all over the world.

In a time where streaming is so popular, this fast-paced, inspiring series is a must watch for everyone.