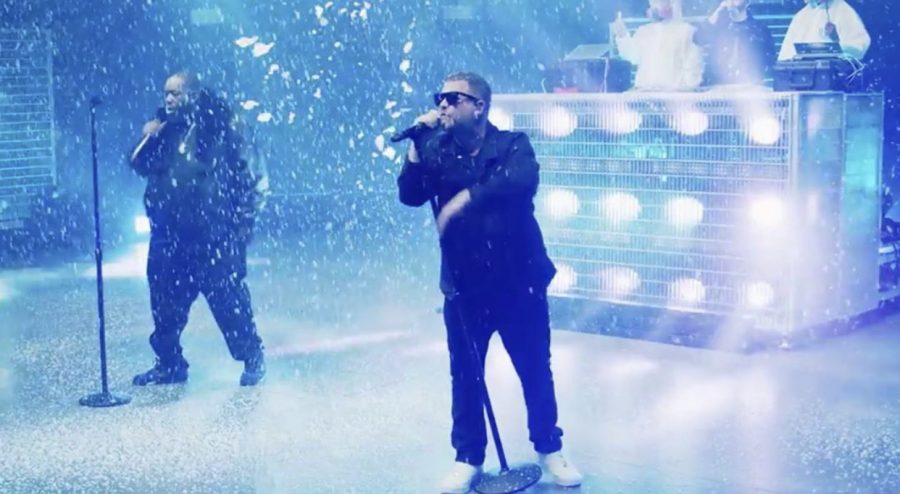 Run the Jewels perform “Walking in the Snow" during their "HolyCalamavote" concert that was aired on Adult Swim.

The concert was a collaboration between Run the Jewels, Ben & Jerry’s and Adult Swim to get Americans to pledge to vote. Through a text service, fans were able to register for the pledge weeks before the concert aired.

Originally, the concert was advertised as a livestream, one that would have special guest appearances from Pharell, 2 Chainz and Zack de la Rocha of Rage Against the Machine. The day before the concert was scheduled, it was announced that the performance was pre-recorded due to issues stemming from COVID-19, and nothing was noted of the guest appearances.

At midnight, the concert became available through HBO Max and the Adult Swim website. Actor and comedian Eric Andre opened the show and urged everyone to get out and vote, he then introduced Run the Jewels.

The rap duo appeared in a completely different building than Andre to perform their latest album, “RTJ4.” Like a normal concert, they seemed to be on a stage, but the cameras walking through other shots broke the illusion that you’re also at the venue, and not on your couch almost.

During the first few songs, the duo seemed to be figuring out how to go about this social distancing concert and it felt a bit forced. By the third song “Out of Sight,” which features 2 Chainz, they hit their groove.

In the middle of the song, the realization dawns on the audience that 2 Chainz is nowhere to be seen on the screen, despite having been advertised as part of the special. At the end of the song, rapper El-P made a joke, and then in a startled moment noted “oh, wait there’s no one here.”

At this point, there’s nowhere to go but up. Thus far, the concert seemed more like a fantasy of a kid who is asleep in his mom’s basement than the performance of an impactful hip-hop team.

Then, it happened: the moment that the entire fanbase was raving about on Twitter. They performed their most powerful song on the album, “Walking in the Snow.”

During the performance, Killer Mike and El-P became far more serious than their usual playful demeanor. Snow starts falling around them as they rap about the current political climate and call for racial justice. In one of the most notable lines from the album Killer Mike raps “’til my voice goes from a shriek to a whisper I can’t breathe.”

The music stops, the rappers freeze. The lights still. The viewers left in a moment of silence that is so hauntingly beautiful and horrifying.

When the silence is broken it is done without music and without theatrics. Killer Mike looks into the camera, into the viewer and raps “and you sit there in the house on couch and watch it on TV, the most you give’s a Twitter’s rant and call it a tragedy.”

This moment will break you down. The raw and intense emotions came through the television and challenged everything you thought you knew.

After this song, the rest of the performance flies by. In “Ju$t,” the guest performances of Pharell and Zack de la Rocha were projected behind Run the Jewels. Though it isn’t as exciting as an in-person appearance, it works and brings the performance together.

By the end of the performance, they have done what they set out to do; enlist their fans to get out and make a change and, as Killer Mike urged fans, to refuse to lose and give up.