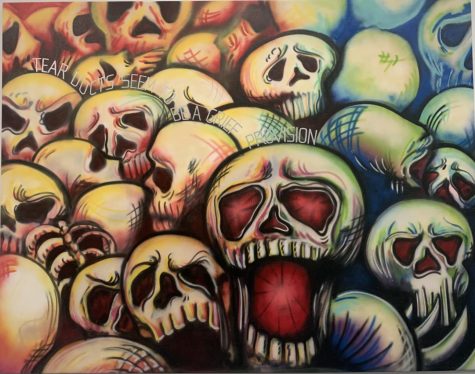 The Museum of Fine Arts’ (MFA) newest exhibition “Writing the Future: Basquiat and the Hip-Hop Generation” is an installation of firsts.

Originally scheduled to debut in April of 2020, “Writing the Future” was just beginning to be installed the night the MFA was shut down due to the COVID-19 pandemic.

More than something new for the museum itself, this exhibit is the first of its kind for Jean-Michel Basquiat. Unlike any other before, it examines his relationship to hip-hop culture, and viewers get a look at how Basquiat and 11 other artists shaped this generation of art and music. The exhibit tells a story, not just a story about the artists and their relationship to a cultural movement, but how their art and music is what sparked the movement.

When viewers walk through the exhibit, they can expect to find themselves transported to 1980’s New York City, the pinpoint of the hip-hop movement.

One thing that made this exhibit thought-provoking is all the different mediums they had on display. From TVs, a refrigerator, subway tiles, clothes, and even one of the artist’s ashes at the very end, it brings the exhibit to a new level. Viewers can see the artists transform from using these non-conventional mediums for their art to more traditional mediums, all while not losing their touch and their cultural roots.

The exhibit features seven different galleries that take visitors through the artists’ journey.  The first room, Post-Graffiti is where it all begins. This room showcases how these artists began shaping the art scene by incorporating the influence of street art and graffiti into more traditional mediums that can be found in mainstream galleries.

The exhibit ends with the final room, fittingly named Ascension. In between all of the galleries, viewers get a look at the inside of the artists’ brains. It’s filled with glimpses of their sketches and notebooks and the stories that made their art what it became.

This is an exhibit that highlights and showcases artists of color, including Basquiat himself. The exhibit shows how Basquiat brought his own culture into his work, as seen in pieces like “Hollywood Africans,” and includes works and influences from his friends and fellow artists. Viewers can see this in the second gallery, Portraitures marks the first time Basquiat’s portraits of his Black and Latinx friends and artists have been shown with prominence.

One of the most striking things about the MFA’s new exhibit is its atmosphere and how it shows how the actual art pieces are connected to hip-hop. Many of the artists featured in this gallery are the pioneers of hip-hop culture and street art.

The MFA made a Spotify playlist so users can listen to the hip-hop tracks featured in the galleries, and some of the artists included in the exhibit from New York’s post-graffiti era.

This is also one of the firsts for the museum’s newly curated program “Table of Voices,” which has been three years in the making. It is a new way for the museum to amplify the voices of those in the local community who are passionate about hip-hop culture and street art. At the end of the exhibit, viewers can have the chance to view “Creative Boston on Basquiat,” where they hear from local musicians, artists, educators and others as they speak to Basquiat’s lasting impression on their work and the Boston hip-hop community.

The MFA also has a newly released mobile app in which users can explore more texts and work from Basquiat. “Writing the Future: Basquiat and the Hip-Hop Generation” will be available for viewing at the MFA Oct. 18th.