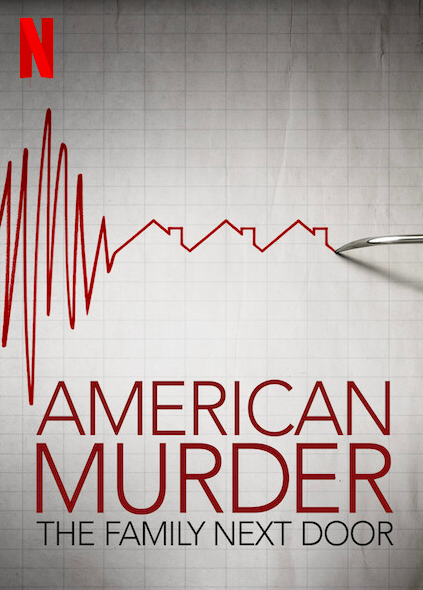 The poster for the documentary.

In 2018, a Colorado family made national headlines when the pregnant wife, Shanann Watts, and her two young daughters, Bella and Celeste, went missing.

After just a couple days, Shanann’s husband, and the father of the children, Chris, was arrested for their murders.

On Sept. 30, Netflix released a documentary about this devastating tragedy, titled “American Murder: The Family Next Door.”

This gut-wrenching story has captivated Americans ever since it first broke. Chris originally tried to paint himself as a victim and a poor husband worried sick about the well-being of his wife and kids. He even recorded a news segment pleading for his family to be returned safely, knowing the whole time that they were dead because he was the one who had murdered them.

This 90-minute documentary goes in-depth to examine and analyze the situation, piecing together the timeline of the murders and attempting to figure out why Chris Watts would murder his family.

It includes personal photos and videos from Shanann’s public Facebook profile, which makes the story just that much more heartbreaking. It creates a personal connection between Shanann and the viewer, as they are invited to peak into her personal life, which appears to be very happy. Her posts made it clear that she and her kids truly loved Chris, and praised him.

There’s a particular video from Shanann’s Facebook where one of her daughters is singing a song she made up, and she says, “My daddy is a hero.”

It’s extremely saddening to see all of the joyful pictures and videos – the kids playing with each other and with their grandparents, Shanann telling Chris she’s pregnant with their third child, the family celebrating Christmas together – knowing that these beautiful, happy souls were brutally murdered by someone they loved and trusted.

The documentary also includes personal text messages between Shanann and some of her friends, as well as ones between Shanann and Chris. These detail a more troubling side of Shanann’s life– her marriage was evidently failing, and she was desperately trying to save it, to no avail. While Shanann was away on a trip, she and Chris were arguing constantly, and when they were finally reunited, Chris refused to be intimate with her.

Later in the documentary it was revealed that Chris was having an affair, and Shanann was suspicious of that, but when confronted, Chris denied it.

It was particularly interesting to see these texts included in the documentary, as they exposed details of what was going on behind the scenes. This seemingly happy American family was actually not so perfect.

The documentary also features body-cam footage from the police officer who initially went into the Watts family home after one of Shanann’s friends requested a welfare check. The inclusion of this footage is one of the most mysterious and interesting parts of the documentary.

Viewers can see Chris leading the officer through the home and lying through his teeth. Then, the police officer is shown some security camera footage from a neighbor, which clearly shows Chris backing his pickup truck partially into the garage to load Shanann’s body inside.

The police cam footage shows Chris in the room as the neighbor and police officer watched the footage while Chris acted very nervous and talked a lot. When Chris left the room, the neighbor told the officer that Chris was acting very strange.

It’s very captivating and heart-stopping to see the footage from the security camera, knowing what Chris had been doing at that very moment, and one can feel the tension in the room as the neighbor and officer start to realize that Chris probably is not innocent.

There’s also video from the police station, where Chris is questioned about his family and takes a lie detector test. This part of the documentary is honestly shocking and heartbreaking. Chris repeatedly denied any involvement, even after the police told him that he failed the lie detector test and they know that he’s not being truthful.

When Chris finally admits to what he’s done, it was very tense seeing the footage when he confessed and hearing the details of how he killed his family and where he placed their bodies.

It was sickening to hear that while Chris strangled Shanann, their young children walked into the bedroom to see her lifeless body. The kids were still alive as Chris drove to an oil site where he worked, sitting in the backseat with their dead mother.

Once they were at the oil site, Chris smothered his two daughters, despite their pleas and cries for him to stop. It’s so heartbreaking to imagine someone has it in them to murder their own wife and children.

This documentary covers a very grotesque, horrific event, but does so in a way that brings attention to the disgusting actions of Chris Watts.

It’s so awful that he would turn his family’s life upside down by having an affair with his coworker and distancing himself from his pregnant wife. It’s disgusting that in the end, he decided to kill them all so he could start a new life with his mistress, instead of just leaving and allowing them to continue on.

The inclusion of personal texts, photos and videos, as well as footage from the police station, help viewers dive deeper into the story than what was covered in news articles, but also makes it much more devastating.