Remembering the life of Ruth Bader Ginsburg, and the times she visited Suffolk 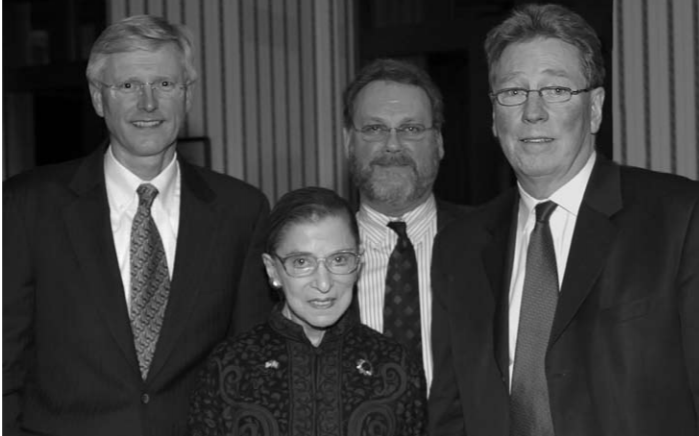 Photo by John Gillooly, courtesy of the Moakely Archive & Institute

America lost an iconic legal figure with the passing of Ruth Bader Ginsburg.

Ginsberg, who died at age 87 on Sept. 18, was known for her tough dissents as a Supreme Court Justice and several historic Supreme Court case wins during her time as a litigator and was a force in the fight for women’s rights.

Ginsberg inspired generations of people from a variety of races, religions and political parties. A role model to feminists and aspiring female lawyers everywhere, her death was mourned by millions.

Ginsberg visited Suffolk twice in her life; once in the 1970s for a conference, where she gave a speech on appellate advocacy while she was one of the ACLU’s General Counsel and after she had co-founded the Union’s Women’s Rights Project, and once in 2007.

“The legal profession has among its practitioners brave men and women who strive to change that perception, jurists devoted to, and at work for, the public good- people who are the best of lawyers and judges, the most dedicated, the least selfish,” Ginsburg said in a speech given at Suffolk Law School in 2007.

Sivheng Sok, a Suffolk politics, philosophy and economics major who is also the vice president of the Suffolk University Legal Association, is a supporter of much of RBG’s work.

“There are a lot of things she has left for later generations that are very significant, [as] they made an enormous impact on our lives,” Sok said.

Sok was inspired by Ginsburg’s history of breaking through the glass ceiling that had previously stopped women from achieving their dreams and advancing in their careers. Specifically, in areas that wouldn’t be possible if it weren’t for Ginsburg’s determination, Sok said.

“She is an American icon and someone who prioritized her civic responsibilities by using her seat in the Supreme Court to advocate for the rights that all humans are entitled to, above anything else,” Sok said.

Ginsburg didn’t wait until her illustrious career in the courts to challenge gender roles. Ginsburg’s success and fight for gender equality began soon after her graduation from Cornell University in 1959. Her stint with academia and its impacts on changing history for both women and men are lesser-known, as Ginsburg didn’t gain the title of ‘icon’ until she was well into her 70s.

In 1956, Ginsburg followed her husband Martin to Harvard Law School. She was one of nine women in a class of over 500. Ginsburg faced quite a few instances of discrimination throughout her time at Harvard but persevered and became top of her class, earning a spot on the prestigious Harvard Law Review. To top it off, she did all of this while raising her baby daughter Jane.

After graduating from Columbia Law School, Ginsburg was turned away from firm after firm in the cutthroat New York City legal scene. Eventually, she was offered a position as a professor at Rutgers University, where she began teaching various discrimination law courses.

It was during this time that Ginsburg began her work as a private litigator. She worked on several sex discrimination cases, often choosing to represent male clients to appeal to the judges while allowing room for expansions of the laws to include both men and women. It was also during this era that the American Civil Liberties Union (ACLU) Women’s Rights Project was initiated under RBG’s leadership.

Ginsburg went on to win five out of six historical cases she tried before the Supreme Court, including one that allowed fathers to collect social security survivors’ benefits. Her work as a litigator and professor led to her first judgeship in the D.C. Circuit Appeals Court and ultimately as a Supreme Court justice.

Ginsburg, a liberal-leaning judge, was known to often side and work with conservative judges on the Supreme Court if it meant making what she believed was the right choice when it came to Supreme Court decisions. There were several pivotal moments throughout her time on the bench, however, in which she dissented and made her differing opinion known.

Ledbetter v. Goodyear Tire & Rubber Co. was tried in front of the Supreme Court in 2007. Ginsburg knew this case had the potential to shape history for women in the workforce.

An executive at Goodyear, Lilly Ledbetter, had recently retired and learned she had been making 40% less pay than her male counterparts that held the exact same position. In turn, Ledbetter sued the company for employment discrimination and the case made it all the way up the appellate courts before landing on the Supreme Court docket.

Though the majority voted in favor of Goodyear Tire, Ginsburg’s critical dissent laid the groundwork for Congress to make a change. In  2009, the Lilly Ledbetter Fair Pay Act was passed as newly elected President Barack Obama’s first bill in office. This reversed the original Supreme Court decision.

Ginsburg once said, “[I would like to be remembered as] someone who used whatever talent she had to do her work to the very best of her ability.”

Ginsburg’s teachings as a professor, her historic Supreme Court cases as a litigator and her time serving the American people as a Supreme Court Justice have all secured that very wish, as America’s mourning of her death shows.