New restrictions issued in the UK as COVID-19 cases climb 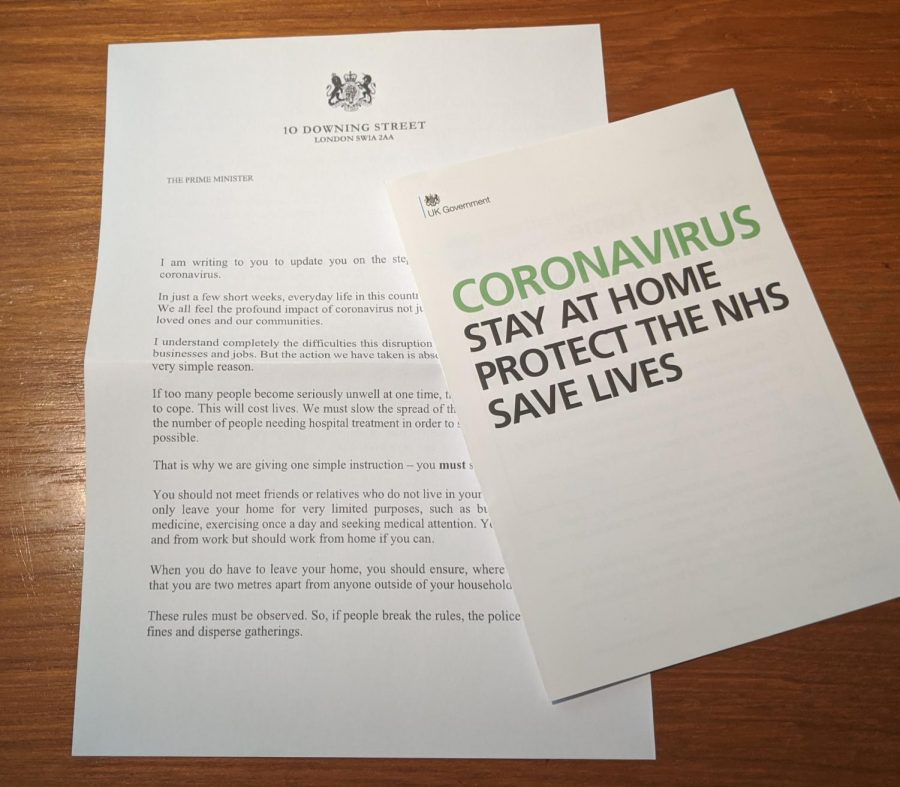 A pamphlet discusses the proper precautions needed for COVID-19.

As the second wave of COVID-19 increases in the United Kingdom, new restrictions are being put in place by local government officials in an attempt to slow the spread of the virus.

“We always knew that while we might have driven the virus into retreat, the prospect of a second wave was real,” said Prime Minister Boris Johnson at his Sept. 22 COVID-19 speech. “I am sorry to say that – as in Spain and France and many other countries – we have reached a perilous turning point.”

There is currently no set level of infection that prompts new restrictions to be put in place in the U.K., but if the rate surpasses 40 infections per 100,000 people, it is likely that new rules will be instituted, according to the BBC.

In parts of Wales including, Llanelli, Cardiff and Swansea, people are no longer allowed to gather indoors with people from other households.

Pubs and restaurants are required to close by 10:20 p.m., according to the BBC. First Minister Mark Drakeford said that low-income residents will be offered £500 if they are forced to self-isolate.

Pubs and restaurants in England are required to close by 10 p.m. and are restricted to table service only, according to the BBC. Face masks are mandatory for wait staff and customers who are not seated.

The guest limit for weddings in England has changed from 30 to 15 as of Sept. 26. Fines for breaking these rules have been increased to £200. Stricter restrictions have been placed on higher risk regions.

As reported by the BBC, Scotland First Minister Nicole Sturgeon has announced a ban on people meeting inside others’ homes, which began on Sept. 25.

Up to six people from two different households are allowed to meet outdoors, however, children under the age of 12 can meet outdoors with no limit. Pubs and restaurants in Scotland are required to close by 10 p.m.

In Northern Ireland, the people have been told they can no longer meet people from outside of their households according to BBC.

There are limited exceptions to this rule, which include, but are not limited to, forming a “bubble” with other households, childcare responsibilities and maintenance and building work, as listed by indirect government service.

To enforce these new rules, the police have the power to ensure people are abiding by these restrictions. This includes asking somebody to return home if they believe they are staying away overnight, issuing fines as necessary and issuing “prohibition notices,” the BBC reported.

A prohibition notice is a notice issued as a public safety measure that requires premises such as restaurants to stop unsafe activity that could contribute to the spread of COVID-19, according to the BBC.

There have been talks of a possible second lockdown in the U.K., however, this subject is highly controversial and has not been confirmed.

“Accept there is a choice in this. But is an urgent choice, leave it a few days or weeks & situation much harder. With good chance of vaccine & drugs within 6mths I favour stronger, further restrictions now, keep schools open, suppress transmission & save lives. Others may disagree,” said Jeremy Farrar, Director of the Wellcome Trust, on Twitter.

British Labour Party Leader Keir Starmer said to Reuters, “There should be nothing inevitable about a second lockdown […] It would take an immense toll on people’s physical and mental health, and on the economy.”