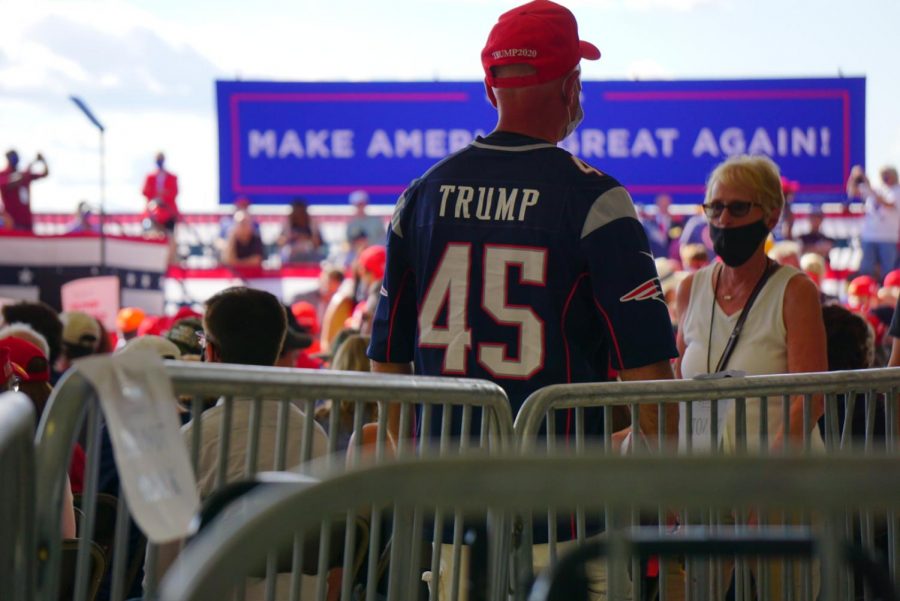 A man wears a Trump-themed New England jersey at a Trump rally in Londonderry, N.H., Friday.

President Donald Trump visited Londonderry, N.H., Friday for a campaign rally that fueled pro-police and anti-protester sentiment in a packed air hangar less than 24 hours after accepting the Republican nomination for president.

It was clear that no one in the crowd at ProStar Aviation was still deciding on who to cast their vote for in November. A sea of Red Make America Great Again, Keep America Great and other Trump-themed hats could be seen on rally goers who were also adorned in shirts, and even shorts, with similar displays of support for the president.

Lines wrapped around the field outside the hangar as memorabilia was sold from roadside booths next to homemade signs and tailgaters. Doors opened at 3 p.m., with the president scheduled to speak at 6 p.m. He didn’t arrive until 6:51 p.m.

Creedence Clearwater Revival’s “Fortunate Son” rang over speakers after Air Force One touched down and taxied next to the large hanger.

Journal reporters heard one journalist on the bus ride back to the Mall of New Hampshire after the rally remark that the song was an ironic choice for a president who was born to a well-to-do family and avoided serving in the Vietnam War. The song was, after all, written about poor men who fought in Vietnam.

The crowd cheered as “God Bless The USA” blasted from the speakers as the 45th president emerged from the plane moments later and took the podium.

“I’m thrilled to be back in the Granite State with the true hard working American patriots, ” Trump said to his crowd of 1,400 supporters, “Last night it was my great honor to accept the Republican nomination for president of the United States.”

Many members of the crowd gathered close to the stage and took off their masks — if they were wearing them — once Trump came out, disregarding an executive order from New Hampshire Gov. Chris Sununu that requires masks to be worn at all events attended by 100 or more people in the state.

Staff at the rally passed out branded “MAGA” and “Trump, Pence” face masks to participants who wanted them, but no one was reprimanded for going without a mask.

An announcement before the president’s arrival that reminded rally goers to wear a mask was met with boos from members of the crowd as they sat in chairs that were positioned close together.

The president’s appearance came after he postponed a July 11 rally in Portsmouth, N.H. His campaign cited concerns over Tropical Storm Fay, which was set to pass through New England that weekend. However, the National Weather Service predicted just a chance of showers around the time the rally was set to start, according to the Boston Globe.

Trump later said in an interview with Axios that the rally was cancelled over health concerns.

At Friday’s rally, the crowd remained enthusiastic all night and cheered often as the president spoke.

Trump’s main focus as he spoke stemmed from an incident involving Republican Sen. Rand Paul and his wife the night before, who were confronted by “an angry mob of over 100, one block away from the White House,” according to the senator’s tweet.

In a video posted to social media by a bystander, the Pauls were seen surrounded by a crowd of protesters with a police escort, and were not physically touched. At one point the video shows an officer pushing a protester back with his bike, causing the protester to push the officer back into Paul.

The president condemned the protesters by calling them thugs, and said Paul was “in big trouble last night.” Trump then called for the officers that assisted Paul to be given medals.

According to media reports, the protest outside Paul’s home was peaceful.

The protesters were there to demand action from Paul, a Kentucky senator, over the death of Breonna Taylor, a Black woman who was killed by police when they shot her multiple times as she slept in her Kentucky apartment.

Before the president’s arrival, there was a heavy emphasis on support for law enforcement at the rally. Jerry Flynn, executive director of New England Police Benevolent Association led the pledge of allegiance, which ended with applause and cheers of “USA.”

Trump spoke more about his support for law enforcement and his willingness to use federal forces in places like Minneapolis, Portland, Ore., and Wisconsin, where intense civil unrest and clashes between demonstrators and law enforcement has gone on in those places for months.

The theme of being the “law and order” candidate is rhetoric that Trump has used during his campaign rallies since his 2016 campaign, on his Twitter feed and most recently in his acceptance speech at the RNC.

However, this idea is not new to Trump’s messaging.

In 1989, Trump took out an ad in the New York Times calling for the death penalty for the Central Park Five, a group of five young Black and Hispanic men who were falsely convicted of raping and assaulting a woman in Central Park. The ad remarked, “Unshackle [police officers] from the constant chant of ‘police brutality,’ which every petty criminal hurls immediately at an officer who has just risked his or her life to save another’s.”

In New Hampshire, Trump criticized cities run by Democrats for their handling of protests. He also said that Democrats have a reluctance to enforce order.

“A weak guy like Joe Biden didn’t even bring law and order up as a subject for discussion in the entire Democrat National Convention,” said Trump.

A recent poll from The Washington Post and ABC News has Joe Biden in a nine-point margin over Trump on who to trust to handle the issue of crime and safety.

Biden fired back at Trump Monday, citing the president’s unwillingness to control his supporters.

“He may believe mouthing the words law and order makes him strong, but his failure to call on his own supporters to stop acting as an armed militia in this country shows you how weak he is,” Biden said in a campaign speech in Pittsburgh.

“This would be your president possibly? I want to see the first woman president also, but I don’t want to see a woman president get into it the way (Harris would) do it, and she’s not competent,” the president said as the crowd chanted Ivanka Trump’s name. “They’re all saying ‘we want Ivanka.’ I don’t blame you.”

Harris is the first woman of color on a major party ticket, and her selection as Biden’s running mate comes after months of racial tension and protests in the U.S. that stems from the deaths of George Floyd, Breonna Taylor and other Black Americans at the hands of police officers.

According to a June 5 NPR article, 88% of African Americans believed Trump’s response to protests around the country has increased tensions. He told supporters at Friday’s rally that protesters “are just looking for trouble.”

“It has nothing to do with George Floyd… they don’t even know who George Floyd is. They have no idea, if you ask them ‘who’s George Floyd?’ they couldn’t even tell you,” said Trump. “These are just bad people, and they shouldn’t be representing our country.”