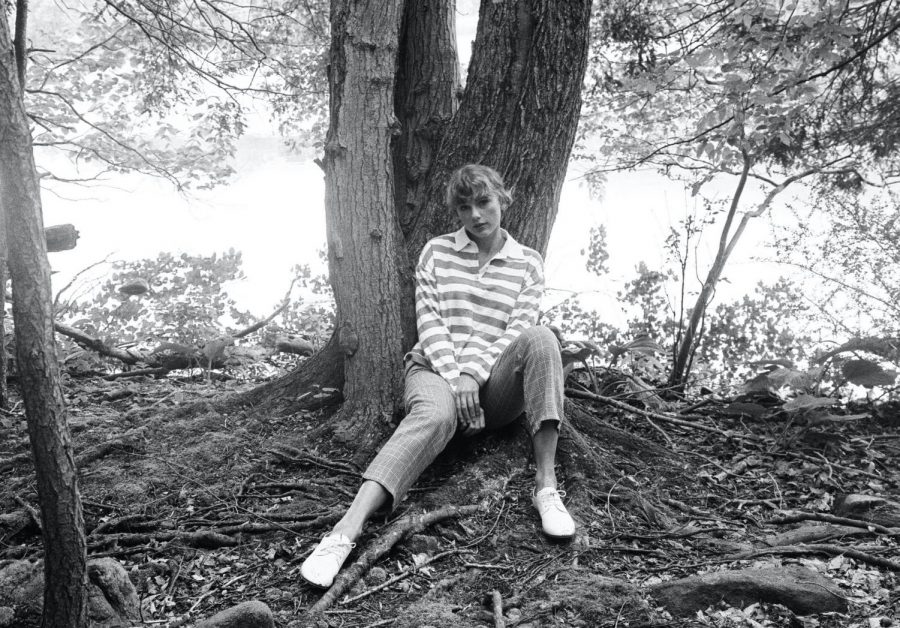 Taylor Swift in a photoshoot for "Folklore."

Taylor Swift’s surprise quarantine album “Folklore” has proved that the former country darling and pop princess is also an indie queen, with the 16-track album that transcends into something magical and nostalgic.

Swift, who is known for huge fanfare and celebrity drama surrounding her album releases, announced “Folklore” via her social media only a mere 17 hours before its release last Friday.

“Most of the things I had planned this summer didn’t end up happening, but there is something I hadn’t planned that did happen,” said Swift, referring to “Folklore” in her album announcement.

Swift’s previous album, “Lover,” which was released August 2019, had months of conspiracy theories and speculation leading up to it, such as a post on her Instagram account that showed seven palm trees to represent her seventh album. Clearly this was not the case for “Folklore.”

With softer and calmer instrumentals and intimate lyrics that provide fans with a moment of escapism into the singer’s whimsical songwriting world, “Folklore” is unlike anything Swift has done before.

For this album, Swift recruited the help of one of the music industry’s top producers, Jack Antonoff, who has been Swift’s go-to producer since “1989” and The National’s Aaron Dessner. Dessner played a key role in crafting the record by co-writing 11 out of the 16 songs on the album. Antonoff also has a few credits on the album.

Swift also credited an unknown and mysterious co-writer by the name of William Bowery, but fans are speculating that this is Harry Styles or her current boyfriend, Joe Alwyn.

“Folklore” is an album about different narratives and character perspectives that are passed on between songs. “August,” “Betty,” and “Cardigan” are all three beautifully written songs on the album that display a love triangle from three different perspectives.

Swift even confirmed that there was in fact a love triangle woven into her album during a YouTube livestream in the hours leading up to the album’s release.

The third track on the album, “The Last Great American Dynasty,” is about the story of Rebekah Harkness, the previous owner of Swift’s Rhode Island mansion. Harkness was the heir of the Standard Oil fortune and was known for her outrageous parties and tragic life, and this song further reflects the narrative, traditional theme of the album.

“Seven” is a heartbreaking song on the album that looks back on Swift’s innocent childhood memories, with the lyric “passed down like folk songs the love lasts so long” once again exemplifying a folkloric narrative.

“Exile,” featuring Bon Iver frontman Justin Vernon, is a moving song about a dialogue between two ex-lovers. Swift’s and Vernon’s voices contrast in tone, highlighting the differences in their relationship.

There are so many more powerful but still tame songs on this album like “Invisible String,” which celebrates fate between lovers and even friends. “Mirrorball” is a wistful and dreamy song that sounds like it should be played during the school dance scene of any 80s movie, and “Mad Woman” which is probably the sharpest song on the album, refers to witch hunting and gaslighting and ties back to Harkness’s story.

Swift doesn’t always explain her lyrics and leaves it up to her fans to decode, but there is a clear thread in this album weaving each track together into a hopeful, emotional and cathartic narrative.

“Folklore” solidifies Swift’s top role in the music industry and once again exemplifies her songwriting chops. One can say Swift defines the music industry with 14 years of experience and albums that span from country to pop and now folk and alternative music.