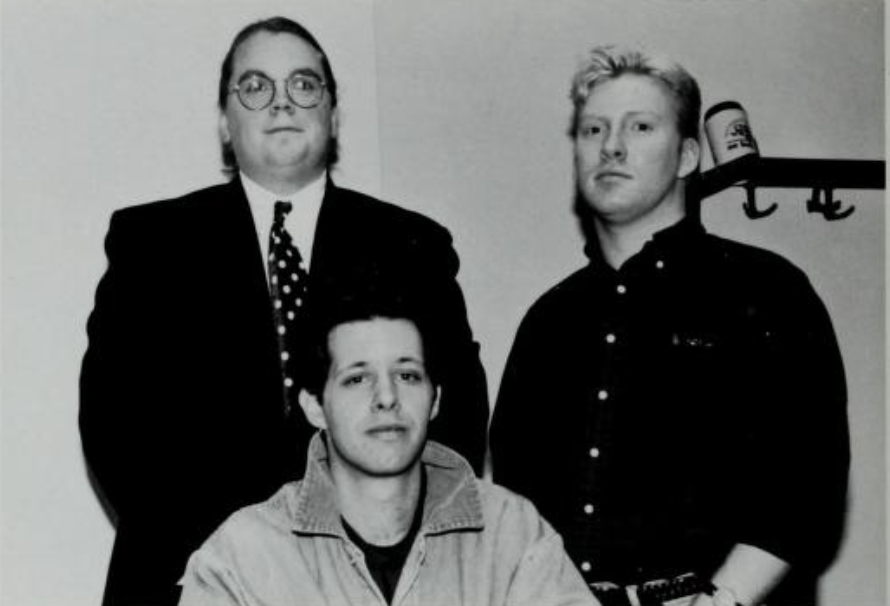 Suffolk recognizes April as it’s Pride Month, so this article will shine a light on the LGBTQ+ community at Suffolk over the years.

The information below is all that is known. There were most likely gay, trans or other non-straight/cis students and faculty at Suffolk since the early days of the university.

According to the Moakley Archive & Institute, Suffolk University was home to one of the first gay and lesbian alliance organizations in the country: the Gay and Lesbian Alliance at Suffolk (GALAS). It was formed in 1986 (the year when New Zealand decriminalized consensual sex between men) and met “informally.”

It was officially recognized by Suffolk’s Student Government Association in 1992 (the year Kentucky decriminalized homosexuality). It became one of the first groups to be funded by SGA.

Shown in Suffolk’s 1993 yearbook, the first official co-chairs of the club were Garrison Smith and Leo McNiff. Publicity was done by Dave DeMarco.

A description in the yearbook says, “After many years of being ‘underground,’  the Gay and Lesbian Alliance at Suffolk was finally recognized last year. This organization strives to open people’s minds to alternative lifestyles.”

It goes on further to say how the club participated in the Aids Walk that year to raise money for the cure and provide support to those impacted.

“GALAS has worked hard to make people aware of different ways of life. They should be commended for their hard work. Great job, GALAS!” ends the description.

In 1996, the club changed its name to the Gay, Lesbian, and Bisexual Alliance until it became the Rainbow Alliance in 1998 (when Georgia and Rhode Island decriminalized homosexuality).

It has been known as the Queer Student Union (QSU) since 2017.

Althea Garrison graduated from Suffolk in 1982 with a Bachelor of Science in Administration. She then was elected as a member of the Massachusetts House of Representatives from the 5th Suffolk District as a Republican in 1992 where she became the first openly transgender person elected to a state legislature in the U.S.

She served in the Massachusetts House of Representatives from 1993 to 1995. From Jan. of 2019 until Jan. 6, 2020 Garrison most recently served as an at-large member of the Boston City Council.

In March 2018 Marisa Kelly was announced as Suffolk’s permanent president, after serving as acting president for  20 months. Kelly began her role as president of Suffolk University on July 1, 2018. Kelly is the first openly queer president of the university.

In 2004 (the year that Massachusettes legally recognized same-sex marriage), the Suffolk University President’s Commission on the Status of Gay, Lesbian, Bisexual, and Transgender Faculty, Staff, and Students was created by Eric E. Lee, the assistant to the president for diversity and director of multicultural affairs from 2004 to 2008.

Similar to the 1972 Suffolk University President’s Committee on the Status of Women, this Commission evaluated Suffolk’s treatment of the LGBTQ+ community on campus. Issues of sexual orientation, gender identity and gender expression were addressed.

Those who pushed for recognition of their identity in the Suffolk community created a welcoming environment on campus. Allowing students and faculty the ability to be themselves through clubs and other organizations makes Suffolk a supportive institution.

“We are all familiar with how Gleason Archer founded this institution to ‘pay forward’ the support from his mentor,” said Michael Dello Iacono, university records manager of the Moakley Archive & Institute. “Our mission compels us to continuously make our school more inclusive and more equitable.”

The goal of this Suffolk Firsts series was to bring attention to those who have usually been overlooked. The Journal wished to recognize those who were the first to help create a diverse community at Suffolk University.

A special thanks to the Moakley Archives and Institute.