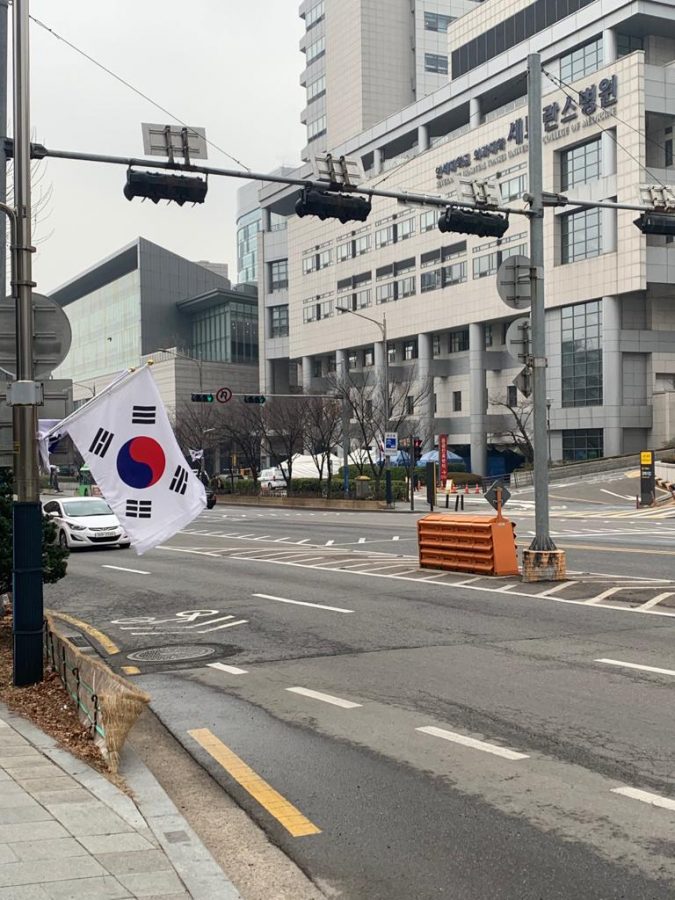 It was just two weeks ago on February 21st that sophomore Marley Belanger departed the United States to spend a semester abroad exploring the life and culture of Seoul, South Korea. She never could have expected that after only seven days in the city, she’d already be booking her flight home.

As concerns surrounding the coronavirus have sparked fear across the international community over the past several weeks, college students abroad, just like Marley, have been faced with some difficult choices: come back to the U.S. and miss out on a priceless experience, or stay and risk the consequences of closing borders, contracting the virus and having access to limited and expensive flights.

Suffolk University President Marisa Kelly emailed the Suffolk community this week stating that all students studying in Italy and South Korea, where there was a level 3 travel advisory warning, were strongly encouraged to return to the U.S.

“Safety is the most important thing,” said Belanger, after making the decision to abandon her study abroad experience and return to the states. “If you wait too long, it starts to get harder to book flights, and they might cancel a lot of flights. The sooner [I leave] the better.”

Belanger said that she started receiving emails from Suffolk encouraging her to return to the U.S. after the travel advisory warning went from a level 3 to a level 4 within an hour.

At the time of her arrival, less than 200 people in Seoul had the virus. The largest outbreak occurred in the southern part of the country — over 200 miles away from the capital.

However, while the virus has yet to hit Seoul, it is anticipated to make a significant impact on the city’s population once it does. Based on recent information released from the Center for Disease Control and Prevention (CDC) about how the virus can be spread, it is difficult to assess which areas are most susceptible to the disease. Belanger, like many other students, has decided it is best to err on the side of caution.

“I know I’ll probably be subject to a self-quarantine when I get back, but I don’t want to put other people at risk,” said Belanger. “When I got on the plane to go to South Korea there were like 23 cases. From the period when I was on the plane to when it landed, there was a major outbreak in the city of Daegu.”

Belanger said the South Korean authorities identified that there was one woman in the city of Daegu, referred to as “patient No. 31” who single-handedly spread the disease to 300 people. This was just one instance that put into perspective how fast the virus could spread.

Similar instances of the virus rapidly spreading over a short period of time have occurred in nations across the globe.

Due to these concerns, President Kelly stated that university officials, “made the difficult decision to cancel all outgoing University-sponsored international student travel until further notice, including international spring break travel programs.”

These programs include Suffolk’s Global Travel Seminars scheduled to Italy, Israel and Costa Rica, the Global Gateway program to Madrid and The Journey Leadership’s program to Barbados.

President Kelly’s email explained that Suffolk would work with students who were scheduled to travel in any of these Suffolk-sponsored international programs in order to minimize their academic and financial impact.

While Suffolk has not yet advised students studying abroad in countries besides Italy and South Korea to return to the U.S., the University stated that it is consistently assessing and monitoring the spread of the coronavirus on a daily basis.

“I am definitely considering going home,” said junior Gabriel Moran, currently studying abroad in Suffolk’s Madrid campus in Spain. “There are people who definitely don’t want to, but feel there’s no choice.”

One of the biggest fears and most prominent factors driving students to come home is that the U.S. may close its borders, prohibiting all students abroad from returning to the U.S. if the virus gets worse in the country they are studying in.

“The possibility that the U.S. might close its borders on us is the number one influence,” said Moran.

Because virus outbreaks have been erupting sporadically across the globe, many universities in the U.S. have reacted similarly to Suffolk in pulling students from their study abroad programs in countries with a level 3 travel advisory and cancelling international spring break trips.

UMass Amherst, Mass Maritime, Northeastern University and various other schools in New England have cancelled international spring break trips and advised students in Italy and South Korea to return to the U.S. as well.

While students who planned to attend Suffolk-sponsored international trips are frustrated their plans were cancelled, based on the unpredictability of the virus, many feel it was the safest decision to call off the trips.

“Of course I’m upset that it got cancelled, but I think the health precautions are the utmost priority so I understand where they’re coming from in that sense,” said first year student Tyler Ohman who was set to attend the Global Gateway program in Madrid. “Sure, it’s a once in a lifetime opportunity but if health is a major concern, we have to yield to that.”

Ohman explained that Suffolk has been very transparent about the process so far and is refunding students what they paid for the trip. The University has not yet mentioned any rescheduling of the trip to the students involved.

Sophomore Allie Olive had originally planned to attend the Global Travel Seminar trip to Italy, which was cancelled last Tuesday due to growing concerns surrounding the virus. Olive explained that students were told they could either withdraw from the course, take additional courses with Suffolk to receive the academic credit for it, or opt to go on a different global travel seminar.

As a double major in Marketing an ISOM, Olive said that it was a priority for her to obtain her credits in order to stay on track to graduate on time. Being a part of the honors program, she had honorized this course, put work into it and had her heart set on traveling over spring break.

Although Suffolk is working with students to relieve any academic or financial burden caused by the cancellations, students that were planning to attend the Global Travel Seminars had to pay for their flights individually. With chaos triggered by the growing outbreak, many are struggling to get their money back even though many students had purchased travel insurance.

After calling the airlines in an attempt to get her money back for the flights, she reached a dead end with no success in getting anything back. As a student that lives on campus but is originally from Illinois, Olive is now faced with paying to live in the dorms over break in addition to over $1,700 in flights.

“This is a hardship. I can’t afford a flight to fly home. They are going to let me stay in the dorms for free which is nice, but this is still a lot of money,” said Olive. “I lost even more because I transferred to another trip which was suggested by [Suffolk].”

Olive has reached out to university officials with receipts of the tickets from her flights. Olive said they are working with her in order to help her get her money back.

“I might get refunded from Suffolk, which would be really nice, but it’s not guaranteed yet,” said Olive. “It is crazy how much [a pandemic] can affect everything.”

Although college students in the U.S. have been most notably impacted by the travel regulations popping up in response to coronavirus, citizens in countries like China, Iran, South Korea and Italy have seen the most significant impacts of the virus itself.

With thousands of cases reported across the globe, some are skeptical that the exact number of deaths reported from countries like China and Iran are difficult to officially confirm based on the vast scope of the outbreak.

“As a foreigner especially I feel like I’m obligated to wear a mask, otherwise the perception is that I’m putting people at risk, and not necessarily myself” said Belanger. “The price of facemasks went from around 50 cents to $4 and they are only for one day usage.”

To keep face masks at a price accessible to members of all socio-economic classes, Belanger said that the South Korean government took control of 50% of the face mask production and they are re-distributing them at public locations in order to provide everyone with the same resources.

This is not the first instance where there has been a shortage of face masks. According to the Wall Street Journal, countries like India and Taiwan have banned exports of medical face masks amid growing concerns.

Shortages like this are only anticipated to increase as the pandemic reaches more countries, cities and communities. As of 1AM on March 4, there have been six reported coronavirus deaths in the U.S. Many anticipate further regulations, quarantines and mandatory coronavirus screenings to pop up as the virus spreads across the U.S.